NEIL LENNON has vowed there will be no January Sales of his top stars at Celtic.

The Hoops boss has revealed he has held a series of crunch talks with players who have been linked with moves away from the champions when the transfer window re-opens next month.

Lennon reckoned dressing-room unrest and persistent speculation interfered with the team’s progress in the first few months of a crucial campaign where the club are bidding for a historic tenth successive title.

Indifferent form saw them crash out of the Champions League at the qualifying stage and shocking displays ended their interest in the Europa League with only one win in six games. Ross County sensationally knocked the holders out of the Betfred League Cup in Glasgow last month and the side are 16 points adrift in the race for the championship although they have three games in hand.

However, three Premiership victories in a row – Kilmarnock (2-0), Ross County (2-0) and Hamilton Accies (3-0) – have got the Hoops back on track as they prepare for this afternoon’s visit of Dundee United and the trek across the city for the second derby of the term against Steven Gerrard’s outfit in Govan.

Lennon, speaking to the Daily Record about the transfer situation, said: “We have spoken to them already and told them no-one is going. We may have to take a view in the summer.

“But the message is: ‘Settle yourselves down and concentrate on the job in hand’.

“It’s a great club and they’ve done great things and have a possibility of doing more great things. But you are talking about four or five months.

“It’s not a massive chunk out of your life to really knuckle down and play and do what you are good at. We are not going to put up with any agitation any more.”

Odsonne Edouard, Kristoffer Ajer, Ryan Christie and Olivier Ntcham have been mentioned in despatches as possibilities to be heading for the Parkhead exit, but any thoughts of leaving Scotland’s title kings will have to be put on hold. 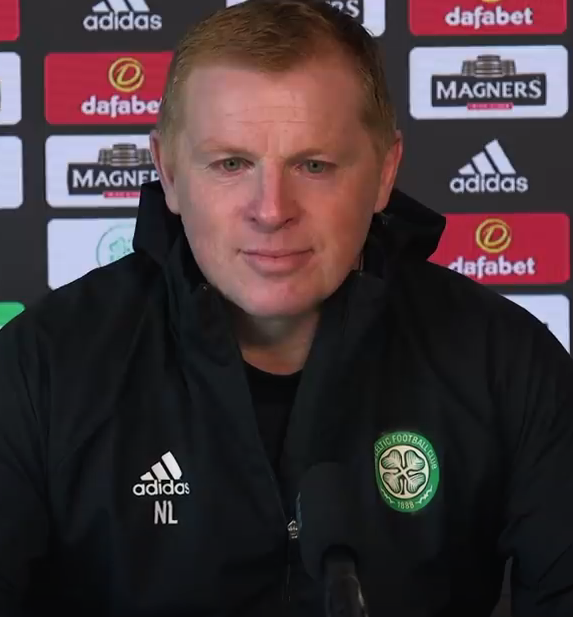 Lennon commented: “Some players are ambitious and will feel like they need a new challenge. We understand that.

“But we have a huge challenge ahead of us here and we want all our best players to be a part of that.

“It was always going to be a difficult season, anyway, because of the high pressure.

“I totally understand that. And that’s why we have not gone heavy on them.

“But we just want them settled now and focused on the next five months ahead. That’s what I’m beginning to see now.

“They got a big boost out of winning the Scottish Cup Final. It really hit home what the club means to them and maybe they realise they will not always get that luxury elsewhere.”

The Celtic chief added: “With the squad being as healthy as it is, I’m not sure we need to do any business at all at the minute.

“We are always looking at a player if one that we like comes up at the right sort of money.

“But January is going to be a very difficult period for a lot of clubs in terms of trying to bring players in.

“We are certainly not looking to sell – that’s for sure.”