Celtic Quick News on News Now
You are at:Home»Latest News»REVEALED: WHEN CALMAC REALISED ANGE WAS THE REAL DEAL
By CQN Magazine on 16th June 2022 Latest News

CALLUM McGREGOR has revealed he knew from day one that Ange Postecoglou was the man to turn things around at Celtic.

The 29-year-old midfielder was named captain in succession to Aberdeen-bound Scott Brown by the Greek-Australian gaffer shortly after his June 10 appointment as the club’s new manager.

Postecoglou kicked off his career at Parkhead with a Champions League exit at the first qualifying stage on a 3-2 aggregate loss to the Danes of FC Midtjylland in July and the Premiership campaign got off to a false start with three losses – at Tynecastle, Ibrox and Livingston – in the opening six fixtures. 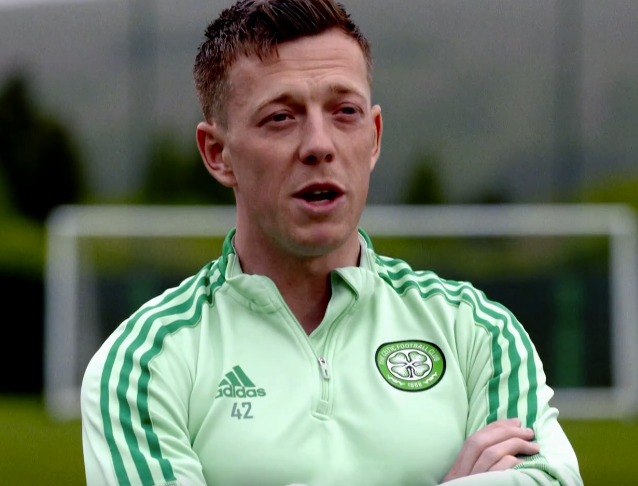 But McGregor was unshakeable in his belief that Celtic had the right man in the adventurous, ambitious former Australia World Cup manager who had won championships in his adopted country and Japan.

Asked how many days in did he think the 56-year-old coach was the gaffer to lead the club back to the title, the Scotland international anchorman answered: “I think pretty much straight away. He said all the right things and, especially at a club like Celtic, to want to play fast, attacking football that’s music to everyone’s ears.

“Very quickly you saw all his sessions were high tempo and he just wanted the whole thing to be moving all the time. You could tell right away that’s the type of football he wanted to play and he was just a case of building from there.

FAR EAST TO EAST END OF GLASGOW…Ange Postecoglou proudly holds the Celtic jersey on his first day at Parkhead a year ago.

“The manager kept telling us we had to commit, what I’m asking you to do is very, very difficult, there are not a lot of teams that are trying to play this way. He asked us to have belief in him and in ourselves and he would get us there.

“He was adamant we would be successful and he was right. The easiest thing in the world is to watch football and criticise, that’s the way football is going now. I think what we have here is a strong mentality with a strong leader who knows it’ll be difficult, but he gave us that belief to go and trust ourselves.”

Asked if there had been any doubts before the appointment, especially after the previous season’s wretched barren campaign, McGregor, speaking in a special Sky Sports Q&A session, replied: “I think that’s the uncertainty that puts doubt in everyone’s head. You’re just waiting on the next piece of information.

“We had the Euros, as well, so you’re trying to fully focus on that while obviously looking at the situation back here and how it develops. The thing about Celtic is even after disappointment, the club always bounces back. 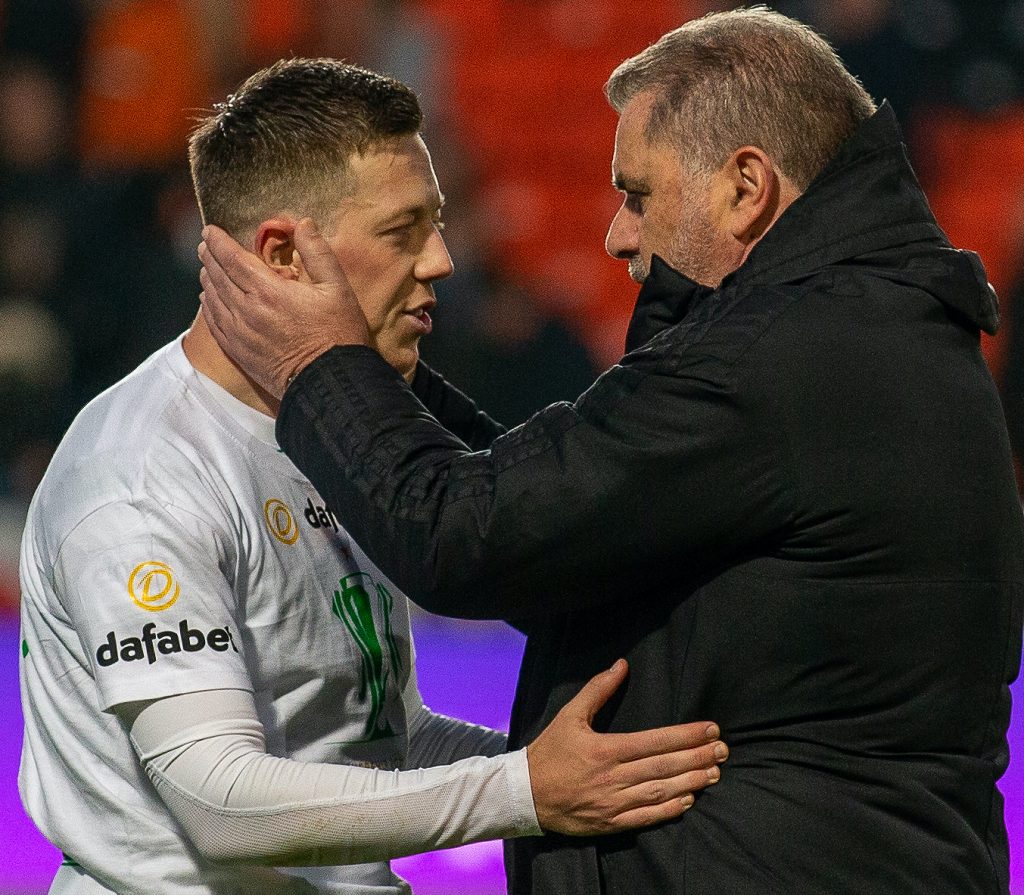 THAT’S MY BHOY…Ange Postecoglou and skipper Callum McGregor after the title had been achieved in the 1-1 draw with Dundee United at Tannadice last month.

“I think we all knew that and deep down we were waiting for the information. But everyone at the club knew we have to go strong and we have to send a clear message. When we got the manager, he was relatively unknown at the time in terms of his work in Europe and what he was like.

“The guys quickly spoke to Tom Rogic and found out all about him. A couple of conversations with Tom and everyone was put at ease in terms of what he would bring and he’s been absolutely first class.

“Straight away you just get a great feeling from him, he had that authority, he spoke well and he had a caring nature as well in terms of he really wanted to help the players.

“He’s said it numerous times that he would take responsibility for the style of play and the way he wanted the team to function, so straight away the players feel at ease with that.

“Everyone on the outside probably gave us virtually no chance, but I think that’s the beauty of football. We had a group of players who were hungry, desperate to do well and hurt from the season before. 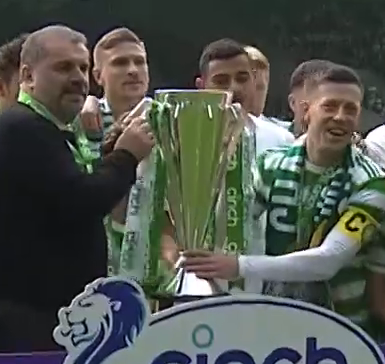 SILVERWARE SALUTE…Ange Postecoglou and Callum McGregor with the Premiership trophy after the 6-0 win over Motherwell at Parkhead on May 14.

“It doesn’t matter what everyone else is saying, we are the guys who can go and make it happen and put in the performances and run for each other and have each other’s back.

“It was important that we had a strong mentality within the group.”

Queried about his immediate feelings when the full-time whistle went at the end of the 1-1 draw with Dundee United at Tannadice on May 11 that guaranteed the title, McGregor answered: “Excited, proud, a little bit of relief, as well.

“The game probably wasn’t great for us in terms of performance, but we hung in there, as we’ve done all season. When you hear that final whistle, it’s just pure elation and brilliant to know that the job is done.

“You never get bored of winning. When you’re at a club like this you have to be like that every year and that’s the type of personality I am.

“I always want more, I always want to be better as a person and as a football player and try to improve all the time. That’s what keeps you hungry. In football, if you lose that hunger then you may as well not play.

“When you get used to winning, it just becomes a habit and when it gets taken away from you it hurts even more. That’s the time when you’ve got to show your personality, what you’re about, show what you’ve got inside you and come back fighting.

“That’s what we’ve done this season.”

* THE full interview is on Sky Sports Football tonight, starting at 5.45pm and includes ‘Ange Postecoglou: We Never Stop’.