IT was ironic that Partick Thistle should provide the opposition on the afternoon Dixie Deans went on a goal rampage and scored a DOUBLE hat-trick in Celtic’s runaway 7-0 victory at Parkhead on November 17 1973.

Exactly 48 years ago today, the chunky hitman became a history Bhoy with his remarkable scoring feat with a six-hit performance against future Scotland keeper Alan Rough and his decimated Jags rearguard.

It was largely thanks to the Firhill club that Deans joined the Hoops from Motherwell in a £22,500 deal two years previously. 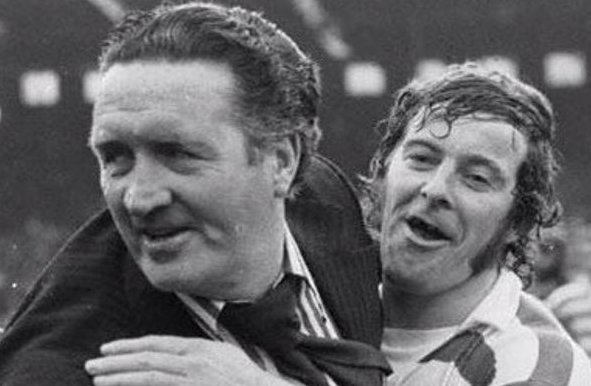 THE SUPREMO AND THE STRIKER…Jock Stein and Dixie Deans celebrate a Celtic triumph.

Jock Stein had watched his Celtic team, with the likes of Kenny Dalglish, Lou Macari and Harry Hood in attack, collapse to a sensational 4-1 loss to the Maryhill club in the League Cup Final on October 23 1971. It was one of the all-time Hampden shockers with the unfancied Jags four goals ahead inside 37 minutes.

Dalglish scrambled in a consolation effort in the second-half, but Celtic, without the injured and influential Billy McNeill in central defence, couldn’t produce a spectacular comeback on a black day for the club.

In the aftermatch of an embarrassing result, Stein made up his mind that his team needed an out-and-out striker – and eight days later Deans arrived at Parkhead.

The forward was already in the middle of a suspension, but the Celtic manager looked to the future and he saw the no-frills hitman as being exactly what his talented team required. 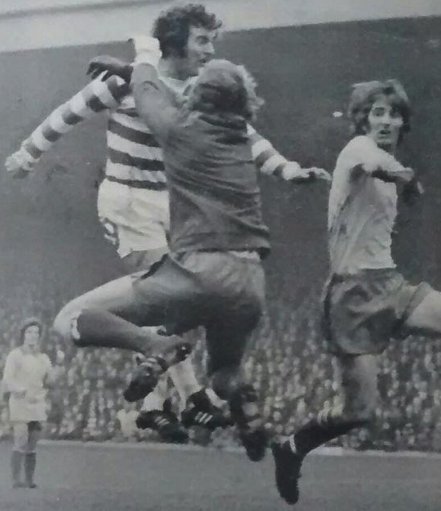 HEADS I WIN…Dixie Deans rises above Thistle keeper Alan Rough and defender Nobby Clark to nod in one of his six in November 1973.

And if the legendary gaffer ever needed to be vindicated in arrived on a cold and misty afternoon in the east end of Glasgow in November 1973 when Deans thumped a six-goal salvo behind Rough, the same keeper who had largely kept the Hoops at bay in the Hampden nosedive.

Deans’ scoring feat has only been bettered by club great Jimmy McGrory who scored EIGHT in one game against Dunfermline back in 1928.

In the 74th minute, Deans claimed his fifth and, with the encounter heading for a satisfactory conclusion, the striker, who won two caps for Scotland the following year, claimed his sixth in his breathtaking one-man show.

Later, he said: “I didn’t know anything about records or anything that day. When I found out that I had actually broken the post-war record for goals in a game, I was actually quite annoyed, because I had missed three or four good chances that day! 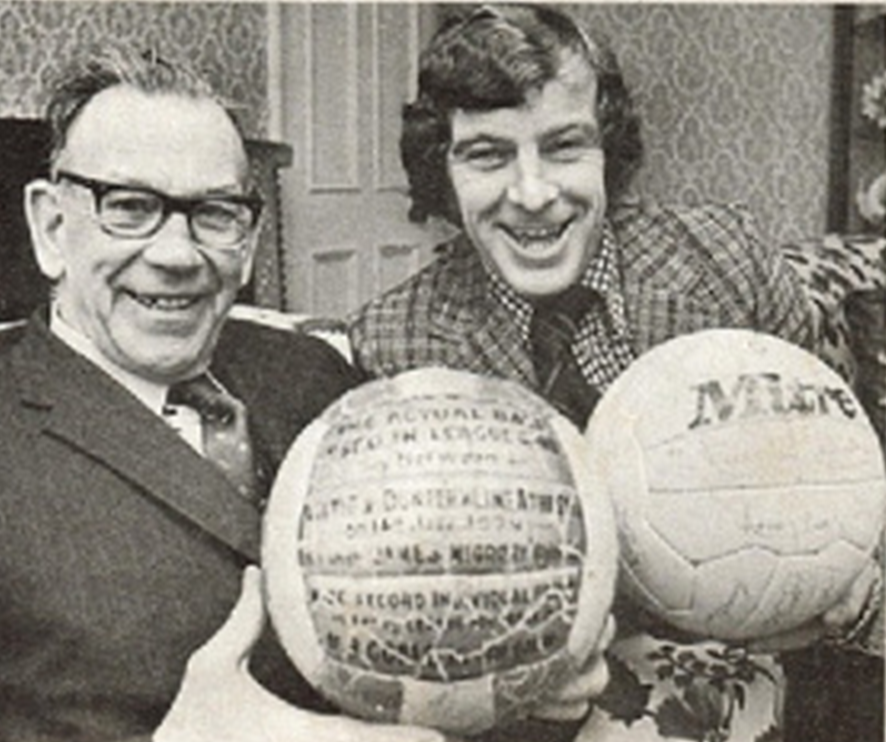 “You are there as a striker to get on the end of things though and you never bury all your chances. If you take a few of them in a game you should be happy and I got six that day.

“It was actually Jimmy McGrory who told me about the record, though. He came down from the stand, met me in the tunnel, shook my hand and said: ‘I thought you were going to break my record, Dixie, and you should have!’

“He had got eight in a game and that was the pre-war record, but I had no idea. Jimmy was a gentleman, a great man and he signed the ball as well that day, along with my team-mates, the backroom staff and all the Thistle players and coaches.”

Deans, who collected 89 strikes in 126 league outings in his five-year Hoops career, completed the campaign as the club’s top scorer with 33 goals.