LYNDON DYKES admits he is pleased he has managed to “ruffle” up Christopher Jullien this season.

Livingston’s powerhouse striker scored the killer second goal when the champions slumped 2-0 in West Lothian in October and he put himself about again in the 2-2 midweek draw.

Dykes acknowledged that he had tried to rough up the Frenchman who had apologised to the Hoops fans after the first game for being “too nervous” – and that frank admission was welcomed by the robust attacker.

The Livi star, speaking to the Evening Times, said: “I heard he said that.  I don’t know what it is. Maybe he was a bit timid and a few times I got in behind him and he was a bit nervous.

“It’s a big compliment to me because he’s a £7million defender saying something like that about me.

“I just went out to do my best and show him he wasn’t going to get an easy time of it. 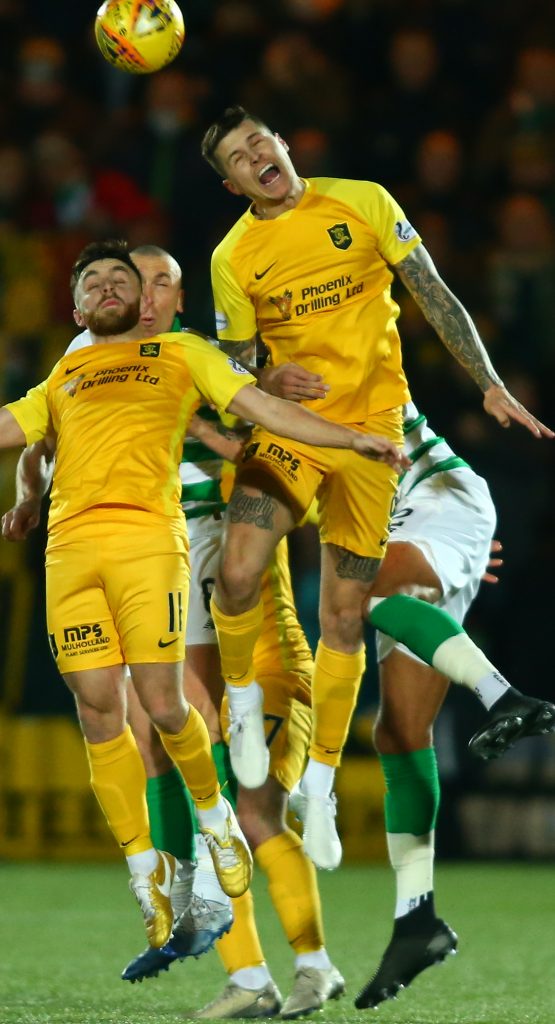 “I just go out like it’s another person and do my best. I think that’s twice now I’ve ruffled him up a bit and he hasn’t liked it. So that’s pleasing.

“But he’s a great player and he shows that week in and week out.”

Dykes set up the second goal on Wednesday for Scott Robinson following an unfortunate slip by Jullien on the plastic surface and the personal duel between the defender and attacker was a fascinating sideshow on an evening when Neil Lennon’s men went 13 points ahead in the race for their ninth successive title.

Australia assistant manager Rene Meulensteen watched Dykes against the Hoops, but the forward is still unsure whether his allegiance will lie with the Socceroos or with Scotland.

“Whoever wants to come and speak to me then I am obviously open to speaking to them both and seeing what happens. But I am only thinking about a top six finish for Livingston and anything above that is a bonus.”