I was traveling over to Glasgow on a Saturday afternoon, Saturday 10th May 2015 from Dublin to Glasgow.  I was sitting patiently waiting to board my Ryanair flight when a guy approached asking was I a Celtic fan? I had my passport in my hand but the Passport cover had the Celtic crest on it so, logically, he assumed I was a Celtic supporter.

I had been travelling over to Glasgow with the intention of traveling North the following day for the Aberdeen versus Celtic game up in Pittodrie. A chance to see the Bhoys first game post being confirmed as four in a row SPFL Champions was not going to be passed up.

The guy spoke pretty good English, had a Celtic Jersey on underneath his Jacket and it was clear from speaking to him that he was a foreign national. We engaged in conversation, obviously asked each other what our respective names were and talked about Celtic and Glasgow. Lucas was the guy’s name. Naturally, I was hugely intrigued as to why Lucas was heading to Glasgow on a non-match day especially as he was from Brazil! He explained to me that he was a Celtic fan from Brazil and that he had been, for the previous two weeks, in Ireland visiting his brother who is studying in Ireland and visiting friends who share his passion for Celtic and politics.

As we boarded the flight it became apparent that he was not meeting anyone in Glasgow. Lucas simply had been in Ireland for a couple of weeks and felt compelled to travel to Glasgow to see Celtic Park, game or no game!!  I was slightly concerned that he did not know the city well and had a Celtic top on and he was heading for Celtic Park. Queen of the South had to play a game that evening against a newly formed Glasgow club in a play off game to gain promotion to Scotland’s top division and the pubs in the Bridgeton area of the city were going to be busy with supporters of a club who were less than Celtic friendly.

The last thing I wanted was for Lucas to walk through Bridgeton that late afternoon with a Celtic top on.  As I had a few hours to spare upon landing in Glasgow before going drinking that Saturday evening, I told Lucas I would take him to Celtic Park. We got the bus in to the city centre from Glasgow airport and walked from Central station to Celtic Park showing Lucas the passionate Celtic pubs on route. As we got to Celtic Park, Lucas was like a kid of Christmas morning, honestly, the joy in his face being outside Paradise was truly fantastic to see!

He felt so, so happy, you can see in his eyes that he felt at home!  He bought a Celtic scarf in the Celtic Superstore, took some more photos and eventually we got a taxi back to the city centre. Lucas had told me it was his intention to fly to Glasgow on the Saturday, sleep at Glasgow airport on the Saturday night and fly back to Dublin on the Sunday morning and fly home to Brazil on the Monday. I was so impressed that he simply was prepared to fly to Glasgow from Dublin with little money, not boarding the flight with anyone, not knowing anyone in the city, to spend only a few hours in the city, sleep at the airport and fly back to Dublin on the Sunday morning just to see Paradise!! 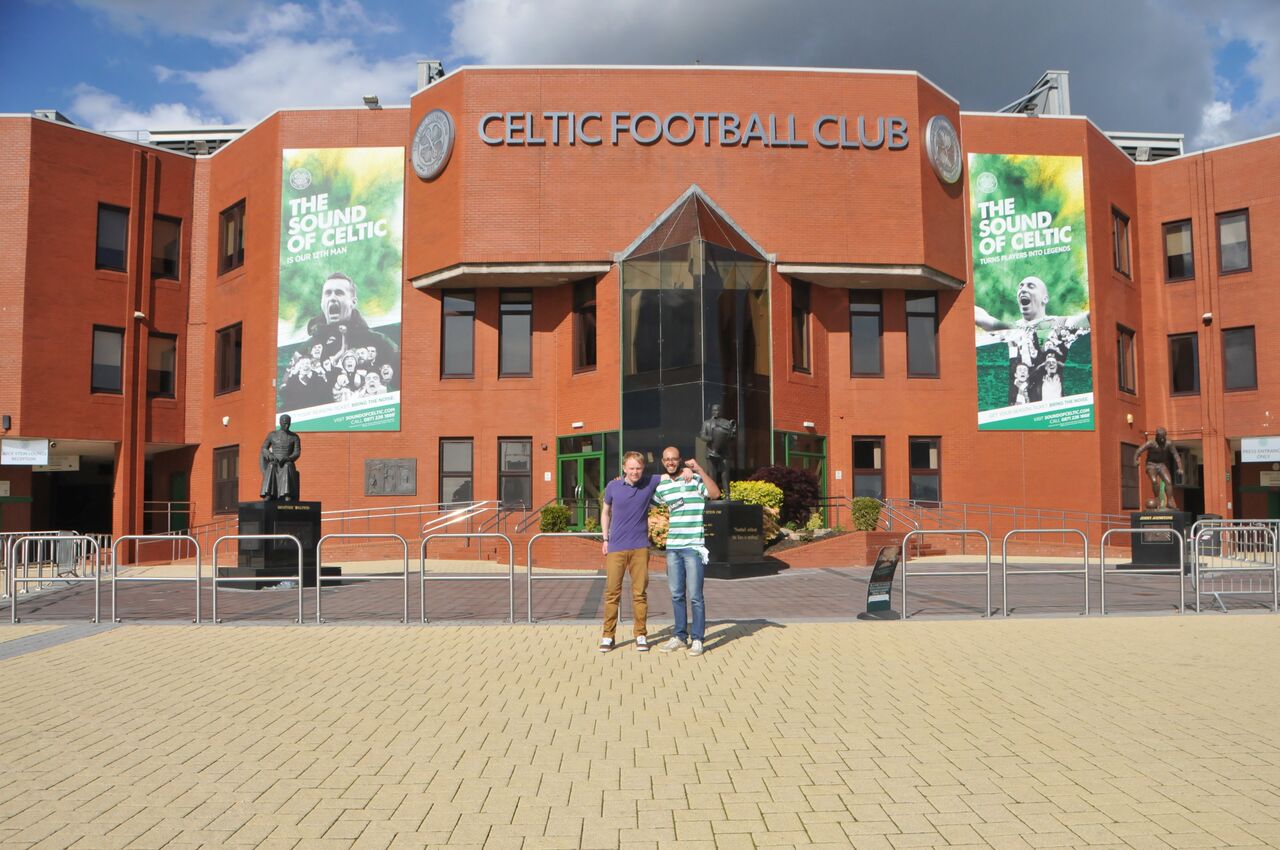 When we got back to city centre at approx 6pm Lucas and I went for a few beers in Failte on Vincent Street in Glasgow city centre. My Glaswegian friend who I was staying with that evening before heading to Aberdeen following morning,  joined us at approximately 7pm. His many friends then joined us and before long there was about 8 of us, all Celtic fans drinking and simply consumed with fascination at Lucas’s passion to get to Celtic Park. Many other people in Failte that evening overheard me relaying the story and bought Lucas drinks all evening. I don’t think he had to put his hand in his pocket all evening and quite rightly so!

We ended up drinking in Failte until midnight and the 8 of us went my back to a friend of my Glaswegian friends house. We continued drinking and partying until  approx. 4am and Lucas was in the thick of it really enjoying himself!!  Eventually then my Glaswegian friend, Lucas and I got a taxi. My friend and I headed for his house to get three or four hours valuable sleep whilst Lucas stayed on in the taxi on to Glasgow airport. His plan initially was to spend a few hours in Glasgow and head to Glasgow airport at a respectable time but, as he acknowledged, the way the evening, night, early hours of Sunday morning worked out, he was more than happy with. What I also found out that evening was that Lucas and I had a mutual Celtic supporting friend in Ireland. In fact, during his two weeks in Ireland, he stayed for some of that time with our mutual friend. Small world!

I sent him a private message on the Monday evening asking him would he be prepared to do a short Q and A for a Celtic magazine. He said he felt honoured to be asked and he duly obliged. The questions and the answers are set out below. My respect for the guy for many reasons is massive. His undoubted passion for many things that bind Celtic fans was truly evident especially in some of his answers. Add in the fact, regardless of his love of Celtic, he is a really decent, genuine and humble person.

Why did you start following Celtic? Was your own personal situation / upbringing a factor in choosing Celtic?

I started my interest in Celtic after read one magazine in Brazil that explained the religious rivalry against Rangers. By that time I was starting to study the other sides of football, for example the football links with politics, ideology and society. Soon I discovered the connection with Celtic and the lower classes as like the immigrants and the working class in general. It was love at first sight. I found myself at Celtic because I come from a humble family of metalworkers. Knowing the Celtic was like meeting a team that played for me, to represent me.

Celtic have a truly brilliant history in terms of being a club that represents working class people, marginalised people. How did you become aware of the history of Celtic?

After reading this magazine I fell in love with Celtic. I immediately went looking for material on the internet and in books to explain me more about the history of Celtic. I had to self educate myself on this beautiful and interesting story …it was difficult because we do not have much Celtic material in Brazil, but it was wonderful each new aspect that I discovered.

You support Palmeiras in Brazil, why Palmeiras? Is their history similar to Celtics history?

I am a supporter of Palmeiras in Brazil and beyond the green and white colours Palmeiras, as well as Celtic, it has in its history a key role of immigrants. Palmeiras was founded by Italian immigrants in São Paulo in 1914. In this period the city received many European immigrants, they are seeking a better life in Brazil.

Are there any other clubs in the world you support, if so, why?

I am a true fan of Palmeiras and Celtic … There are other teams that I like, like Liverpool for the history of the city that also has a very great importance of immigrants and the Saint Pauli for the history of struggle against fascism in Germany.

Have you strong political opinions? If so, what are they? Is your politics left wing by nature?

Yes I have my very firm political positions. I am a militant ANTIFA in Brazil and have been working on projects against racism, sexism and homophobia. In theory I consider myself a socialist. My family has history of metalworkers unions and leftist political parties from Brazil. Thus I believe that my political education first happened in the dining room.

You have visited Celtic Park once just to see the stadium, how was that experience for you? Were the Celtic fans you met friendly?

Visit Celtic Park was a dream. And I knew that at the first opportunity I had I would have to go to the stadium. No matter if there was a match. I wanted to see Paradise with my own eyes. I had the opportunity this year and it was like living my dream, it was like a child in the park and at the same time felt the whole atmosphere of this sacred place, even though it was silent. The Celtic fans I met were wonderful. I’ve never seen anything like it. I knew the feeling of family involving the fans, but I did not realize how strong those feelings. Ross met at the airport because I saw that your Passport had a Celtic design and he embraced me like a brother, took me to the stadium, showed me the city and introduced me to this wonderful family in a pub, of course.

The dream that I visit the Celtic I’ve now realized. Now I have to watch a game between Celtic and Rangers. For me it’s the most important match in all football, ever.

Will we ever see a player as good as Henrik Larsson at Celtic Park in the future?

I think those kind of players are now gone. Those players understood very well the passion of the fans and at the same time possessed a huge quality. I find it difficult seeing someone like Larsson today, but I have faith that other great world names will play for Celtic in the coming years.

Are there many people in Brazil that follow Celtic?

Nowadays with the use of the internet it is easier to watch teams from abroad. Celtic has a large community of Brazil’s fans in all regions of the country. We are a hospitable and friendly people and those are characteristics that make us closer to Celtic.

Are there any Celtic supporters clubs in Brazil?

In Brazil, Celtic’s fans are beginning to understand the importance of organizing themselves in groups. I believe that most of these groups in Brazil is The Bhoys from Brazil.

Is it one of your dreams to see Celtic play in Brazil?

It would be a dream to watch a match Celtic in Brazil. Let’s hope that one day the Celtic can perform a round of pre-season here.

Finally Lucas, can you describe in your words how important Celtic is to you?

Celtic are very important to me because it represents me. It makes me feel that I will never be alone. Each game that plays Celtic is a step reaffirmation of its history. Each match is the statement of a story where workers and the lower classes are protagonists. The Celtic done to me in football which I did not even realize how militant to the world. So it is so important to me, I feel part of this lovely story. 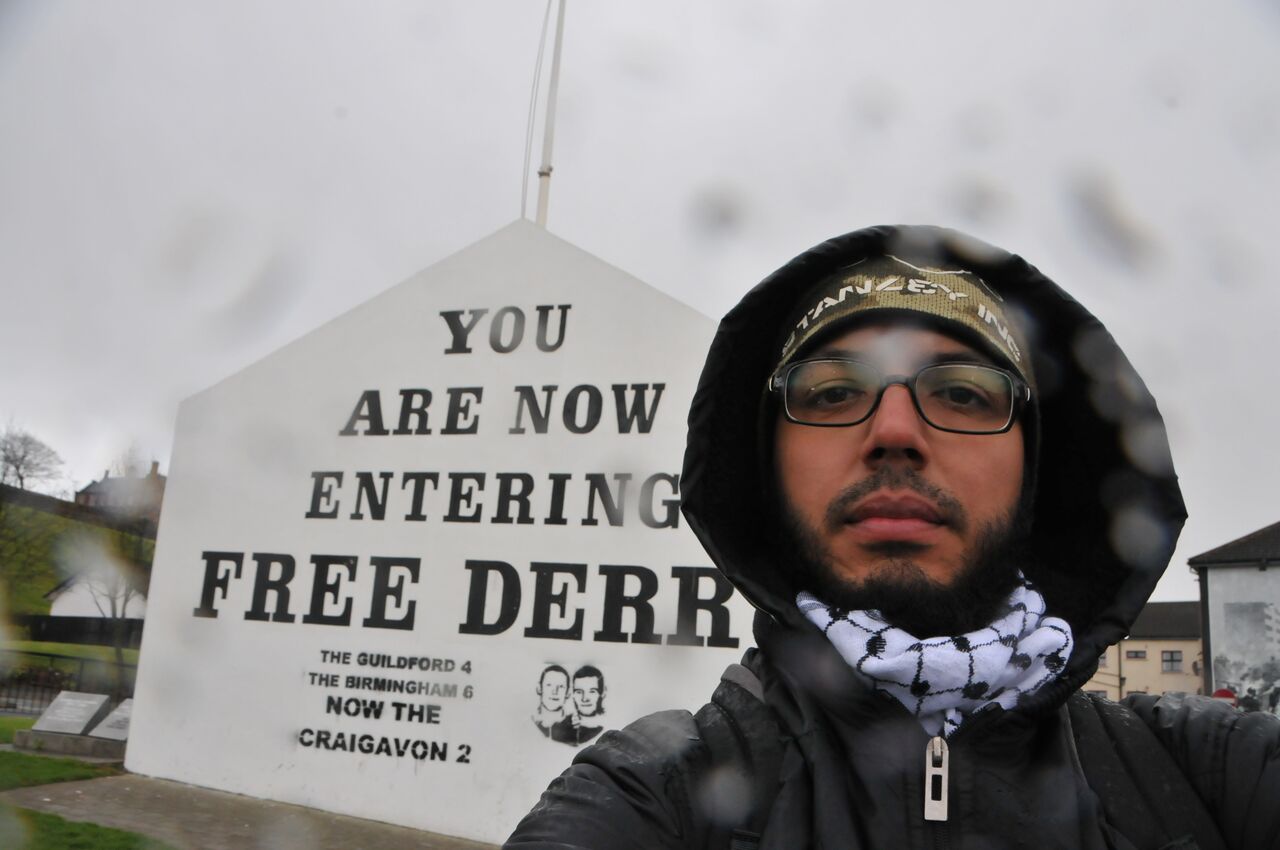