Celtic Quick News on News Now
You are at:Home»Latest News»RODGERS AIMS FOR SIX IN A ROW
By CQN Magazine on 23rd December 2018 Latest News

BRENDAN RODGERS is remaining positive and looking forward to the joy of six when he takes Celtic to Ibrox on Saturday.

The Hoops boss has faced Rangers five times in Govan since he took over at Parkhead in May 2016 – and the Irishman has won the lot.

Rodgers reckons the mental attitude of his players has changed going into fixtures in Govan, a fact that was emphasised last season when they went down to 10 men with over half-an-hour still to play.

The score stood at 2-2 when Jozo Simunovic was red-carded, but the Bhoys’ gaffer refused to panic and introduced Odsonne Edouard from the subs’ bench and the French ace scored the winner with a curling shot from the edge of the box that swirled past the helpless Wes Foderingham.

Rodgers said: “I don’t know what it was like before.

“But I just sensed a feeling when I came in. It’s not so much about changing minds, but changing a mindset.

“There’s a difference. The sense was that the feelings around it were more negative than positive. 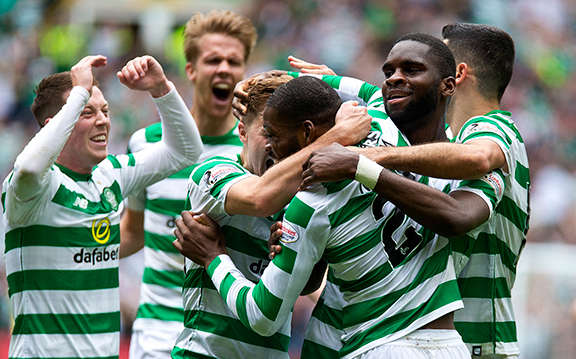 “It’s just pointing out the obvious. If you want to win and win titles, you’ve got to be able to play at the biggest stadiums, whether you like it or not.

“We play with real calmness and that is important because to play in these big games you have to be calm.

“The players have shown consistently the temperament that they have. Last season, we were behind in the game twice and had a man sent off.

“It hasn’t been all plain sailing, but the excellent resilience that they have shown and the quality has been absolutely brilliant.

Rodgers is also adamant that the decision to cut away fans allocation in the derby match puts a dampener on the big occasion.

He added: “In terms of the game being a spectacle, you would want both teams to have as many supporters as they can in both games.

“It is a shame that on both sides some supporters are going to miss out.

“It’s certainly not something that we wanted, but we just have to get on with it. 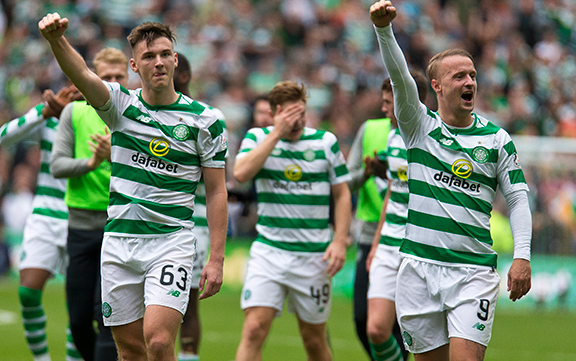 A ROUND OF APPLAUSE…Kieran Tierney and Leigh Griffiths salute the Parkhead fans after the 1-0 derby triumph.

“It’s a great stadium to go to – there is intensity and there is passion there which is what you want to be involved in.

“As long as you keep control and cope with that intensity then you can play well.”

The former Liverpool boss faced his ex-Anfield skipper Steven Gerrard for the first time when the clubs met at Parkhead in September.

The champions won 1-0 with a second-half strike from Olivier Ntcham, but that effort hardly told the story of a game where the seven-in-a-row title kings hit the woodwork four times and dominated throughout.

They will be hoping for better fortune in front of goal at Ibrox on Saturday.