Celtic Quick News on News Now
You are at:Home»Football Matters»RODGERS AIMS TO GO OUT ON EURO HIGH
By CQN Magazine on 4th December 2016 Football Matters
BRENDAN RODGERS is hopeful Celtic can finish their Champions League campaign “on a high” when they meet Manchester City at the Etihad on Tuesday night.
The Hoops boss said: “We know that’ll be a real huge test. We want to go out with a real good performance. We go into every game to win.” 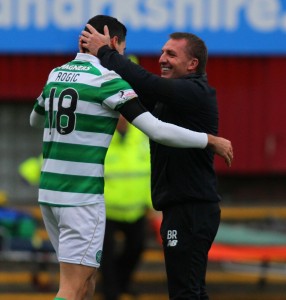 The champions have picked up two points so far in their five group games, having drawn 3-3 with Pep Guardiola’s side at Parkhead and 1-1 away with Borussia Monchengladbach. The Germans also beat Celtic, as did Barcelona twice.

Rodgers said: “Every challenge and every game for us has been different, It’s our last game in the Champions League, so we want to go out on a high.”

Celtic prepared for the tie against City with a thrilling 4-3 comeback win against Motherwell at Fir Park yesterday.
Rodgers added: “I’m delighted for the players because it shows you that if you can play with that aggression and you can be as offensive and aggressive in your attack, you can get the results.
“I’m not really worried and forecasting how long the run can go on. I just look to the next game.”
There are plenty of great Christmas ideas available now at www.cqnbookstore.com including the new 50th Anniversary of Lisbon book and double DVD. Tell the missus…