BRENDAN RODGERS insisted it is “unfair” to try to hold his Celtic stars responsible for the unruly actions of visiting fans.

The Hoops boss reacted to a report Police Scotland are planning a crackdown on post-match celebrations.

According to one newspaper, a senior officer stated Rodgers’ players’ lap of honour following the 1-0 win over Rangers at Parkhead in September sparked a violent reaction from the away followers and “inflamed an already delicate situation.”

Rodgers dismissed the implication and said his victorious team were merely savouring their well-merited success.

He said: “It’s not so much a lap of honour in that last game.

“I think it’s unfair to put the responsibility of away supporters onto Celtic players.

THUMBS UP…Brendan Rodgers thanks the Celtic fans for their support.

“We show our appreciation and respect for the incredible support we get, our aim is never to provoke or antagonise any support.

“Especially the Rangers game, I as much as anyone understand the delicate nature of that.”

The Irishman also made the extremely valid point his players have celebrated triumphs in other games and there has been a hint of trouble from visiting fans.

He added: “I think it’s a little unfair on the Celtic support. 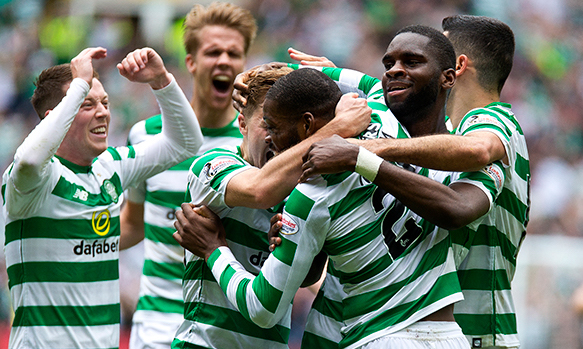 “When I first came in to Celtic, I said to the players that what was going to be absolutely critical for us is the connection between the players and the supporters.

“That synergy is vital if we’re going to succeed.

“I made sure after each game – whether we win, lose or draw – we always acknowledge the supporters.

“They travel from far and wide, up and down Scotland, across from Ireland and from all over the world.

“It’s something we have always done, is recognise that.

“Whether we have won, lost or drawn, whether it’s against Rangers or Ross County away or Livingston or Hamilton, we always do it.”

The match against Steven Gerrard’s Ibrox side in September had been a dramatic encounter with the champions largely in control.

Only Olivier Ntcham’s second-half strike separated the teams, but the Govan outfit rode their luck throughout the afternoon with the Hoops hitting the woodwork FOUR times through Mikael Lustig, James Forrest, Leigh Griffiths and Ntcham.

The teams will bring down the curtain on 2018 when they meet again at Ibrox on Saturday, December 29.