BRENDAN RODGERS is ready to work overtime as he attempts to bring out the best in Oliver Burke.

The Scotland international attacker, who has totalled almost £30million in transfer fees, made his debut in the 3-0 win over Airdrie at Parkhead last night as he kicked off his Hoops career following his six-month loan switch from West Brom.

Burke couldn’t mark the occasion with a goal as a double strike from Scott Sinclair and one from fellow-loanee Timothy Weah shot the holders into today’s last-16 ballot.

The powerhouse youngster tried hard to make a first impression in front of the home support, but passed up a couple of opportunities to get off the mark.

Rodgers said: “There are a number of positions Oliver can play. He came through the system at Nottingham Forest as a winger, then goes to Leipzig, who don’t play with wingers, so he went through the middle.

“With Oliver, he’s had such a whirlwind few years, with the transfers. But with the talent he has, it’s about stripping it all back.

“We have to make his role clear. With young players worth a lot of money, sometimes they think they know the game.

“But he’s still very young at 21. He’s nowhere near the finished article, but he has so many attributes and strengths.

“I love working with that kind of player to see if I can extract that bit more.

“I can see that with him. With that pace and power, hopefully we can give him another view of the game.

“That should see him improve as a player and if he does, it’ll be great for Celtic. 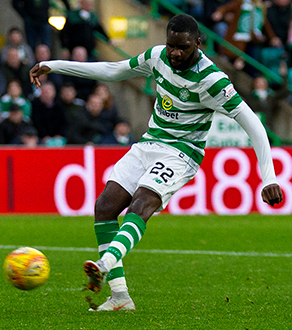 “He’s a boy who’s had so much happen to him in the last few years. But we’ll give him an environment to learn here. He can be an exceptional player, not just for Celtic or West Brom, but for his country, too.

“There’s not too many players here who have the attributes he has – and can affect the game at the highest level.”

Rodgers should have Odsonne Edouard available for the midweek visit of struggling St Mirren and the £10million French ace could lead the attack from the start.

The Irishman, who will also welcome St Johnstone to the east end of Glasgow on Saturday, added: “When we look at our next games, teams will defend low against us.

“So, the key points we have to look for is keeping the game stretched and get crosses into the box. And we need penetration – players running without the ball.

“That’s what brought us our success against Airdrie. And the ability of guys like Dedryck Boyata to play passes like he did for Timothy’s goal. It was a great pass to the run in behind and a great finish from young Timothy.”