Celtic Quick News on News Now
You are at:Home»Latest News»‘RODGERS CAN CARRY ON MOANING AND BLEATING,’ SAYS LOUDMOUTH LEVEIN
By CQN Magazine on 8th May 2018 Latest News

CRAIG LEVEIN has informed Brendan Rodgers he can “moan and bleat all he wants”, but the grass on the Tynecastle pitch will be just as long the next time Celtic visit.

The Hoops boss claimed he was “embarrassed” by the conditions following the champions’ 3-1 triumph in Edinburgh on Sunday.

Rodgers admitted the length of the grass had forced him to ditch his normal tactic of building from the back and adopting a more direct route.

But former Scotland dud gaffer Levein hit back at the Parkhead chief and insisted he was well within his rights to keep the grass longer than usual.

He claimed: “I sat with Brendan for 20 minutes after the game and he never mentioned it.

“I would have hated to see the fury and the froth if they had actually lost the game.

“If we want to talk about a level playing field, if they bring a team through here that earn the same money as our players do, then we will put them out on the pitch and see who wins.

“There is not a level playing field in Scotland and I make no apologies for staying within the rules and trying to win the game. None at all.

“He can moan and bleat all he wants, it will be the same again next season.

“As long as we stay within the rules, then I don’t know what he’s bleating about. Celtic prepare their pitch the way they want it. It’s all a nonsense, really.” 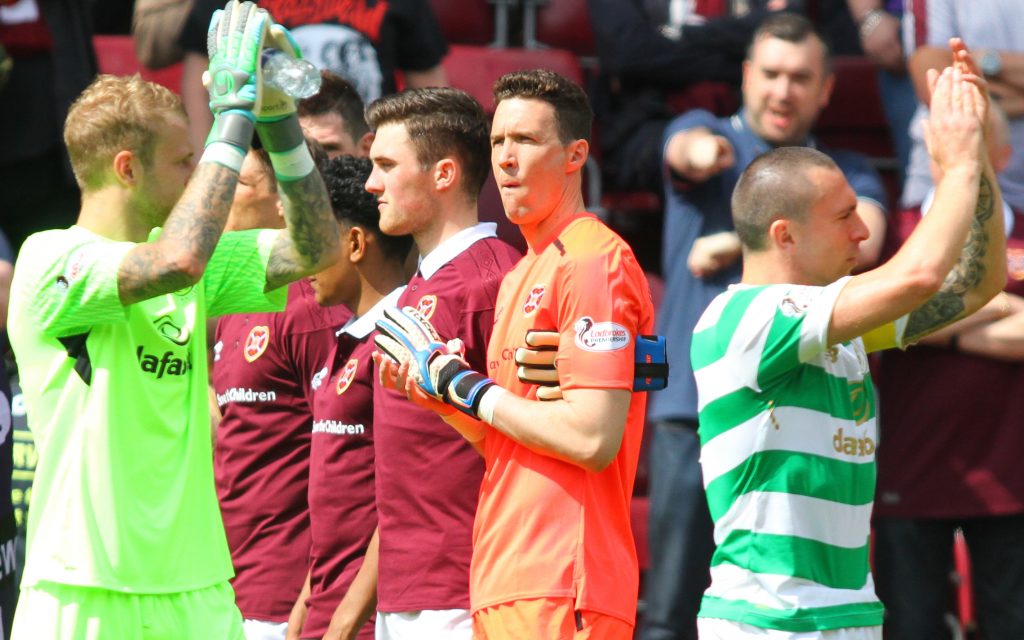 ONE CLASS ACT…keeper John McLaughlin is the solitary Hearts player to applaud the champions onto the pitch on Sunday during the Guard of Honour. Scott Bain and Scott Brown ignore the pathetic gesture from his team-mates. Pic: Geo.

Hearts have committed almost £1million to laying a new hybrid pitch in the close season but Levein warned Rodgers not to expect the grass to be any different on his next visit.

Levein also confirmed the club would challenge any potential ban for Steven Naismith after it emerged SFA compliance officer Tony McGlennan was considering action over the forward’s over-the-top assault on skipper Scott Brown.

Naismith also got involved with a stamp on James Forrest’s left ankle later in the first-half.

The game was laced with bully boy tactics from the hosts that didn’t work as they were taken apart by the champions who matched their physicality this time around.

And, emphasising the lack of sportsmanship, only goalkeeper John McLaughlin, who is quitting the club in the summer, applauded the Celtic players during the guard of honour before the game.

Class team all round, from the dug-out to the overgrown pitch.