DELIGHTED Brendan Rodgers praised his Celtic team as they edged closer to the treble treble after beating St Johnstone 5-0 to reach the Scottish Cup quarter-final.

The team have won seven out of seven since the turn of the year, scoring TWENTY-ONE goals and conceding NONE.

A hat-trick from Scott Sinclair and singles from Scott Brown and James Forrest eased them past the Perth Saints at Parkhead this afternoon and placed them into tomorrow night’s draw.

It also marked the Hoops’ 24th successive domestic Cup success which puts the team into the history books after yet another unprecedented achievement.

Rodgers said: “I thought the first 20 minutes were very good. We were quick in our passing, created chances and got the first goal. That was important, particularly against St Johnstone who defend so well and will come after you a little bit more.

“Scott Brown got his trademark goal every five years! It was a great strike, and wonderful technique. 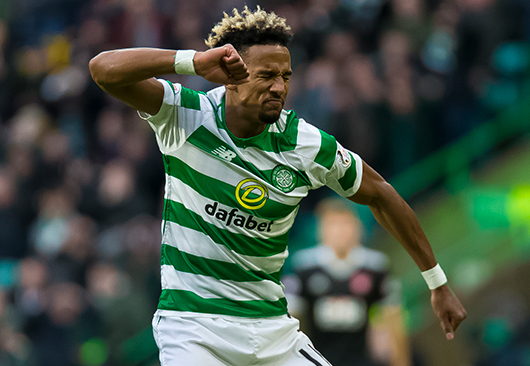 “I thought after that we got a bit sloppy, with some misplaced passes and we came out of our shape. Then we gave them an opportunity and Scott Bain had a good save. At half-time, we had to re-establish ourselves and control of the game in terms of our positioning.

“That allows us to press the game better and sustain more attacks. In the second-half, we were excellent. It was a very good performance and we’re through to the next round.”

The Hoops gaffer also described Sinclair’s prowess in front of goal as instinctive, with the 29-year-old forward having bagged his second hat-trick of the season.

Rodgers, looking forward to Thursday’s visit of Valencia in the Europa League last-32 encounter, said: “That’s what Scotty does, he’s a goalscorer, even if he plays off the side.

“The first goal was a great finish and then he’s probably one of the few players who can keep up with Oli Burke to get in the box when he squares it. He shows a wonderful appetite to get in there and his third goal combines a wonderful piece of skill and finish.

“Guys like Jonny Hayes, too. They aren’t playing as much, but he was great and he defended well. That’s testament to how professional he is.”