The Celtic boss admitted he is keen for the defender, who will be 32 next month, to remain at Parkhead.

Swedish international Lustig, who has been linked with homeland club AIK, is out of contract in the summer, but there is a 12-month option in his deal.

Rodgers said: “It’s always the issue when players are starting to get that little bit older and you are having to look to bring someone else in.

“You have to gauge the qualities you already have. With Mika, it’s not easy as he’s been very consistent in his time here and he gives absolutely everything.

“Mika’s been a great servant. Probably over the course of this winter, which is a busy period, we can sort it out.

“There’s maybe something we can look at with that. There are one or two players contract-wise who we need to sort out as a club. 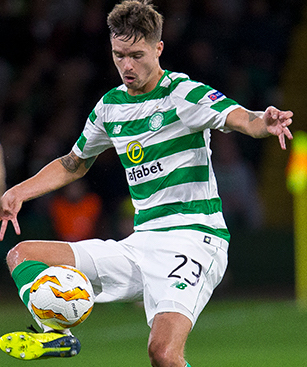 ON THE BALL…the consistent Mikael Lustig.

“At this moment, Mika’s playing really well. I’ve loved working with him. When I came into here there was a question mark over the number of games he could play.  But his availability to train and to play in games has been exceptional.

“He’s a very important player for us and I’m sure in due course that will be looked at.”

Lustig, who was signed by ex-boss Neil Lennon on a free transfer from Rosenborg in 2012, has made the right-back position his own in recent years.

Rodgers is aware he is lacking in competition for the No.2 slot with Costa Rican international Cristian Gamboa and Scotland Under-21 starlet

Anthony Ralston his only alternatives.

Gamboa, who cost £1.2million from West Brom when the Irishman bought him in August 2016, made only three appearances last season and has featured a mere five times this time out.

The 29-year-old attacking full-back is also out of contract next summer and could be looking at furthering his career elsewhere.