Celtic Quick News on News Now
You are at:Home»Football Matters»RODGERS HOPES GRIFFITHS IS QUICK ON THE DRAW IN TRONDHEIM
By CQN Magazine on 2nd August 2017 Football Matters

LEIGH GRIFFITHS slapped down an obnoxious fan at Glasgow Airport en route to Norway with his Celtic team-mates yesterday for the Champions League crunch against Rosenborg.

And Brendan Rodgers is hoping the comeback striker is just as quick on the trigger in Trondheim this evening after last week’s goalless draw.

The Hoops frontman was caught on camera hitting back at a vile punter he suspected to be a Rangers fan. The man made a “paedo” jibe towards Griffiths who replied, “Your club’s dead, mate – beat it.”

The clip went into overdrive on social media, but Rodgers brushed off the incident as he prepares his side for another vitally important European excursion.

He said: “I wouldn’t even go there with me and social media. I don’t have Facebook or Twitter. If I don’t do it, I really don’t want to talk about it.

“If there was an incident then that’s certainly not something we would want. It’s not something any team should need to go through, really. 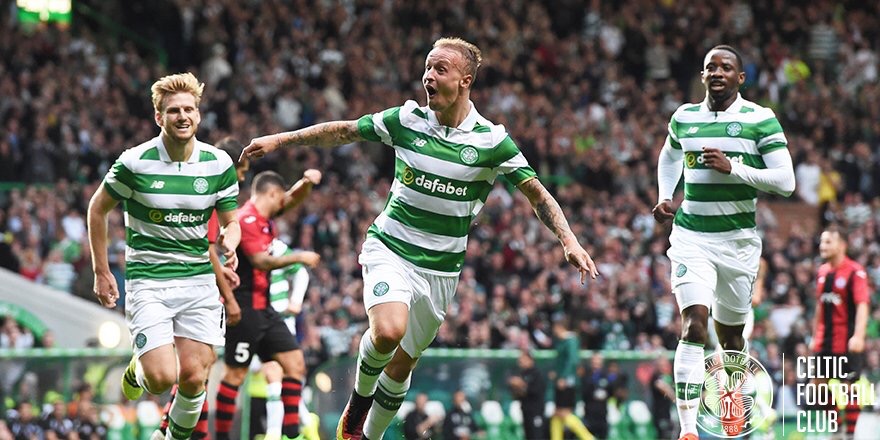 “You want to get in, get checked in, get to your plane and then fly to whichever country you are travelling to. And you want to do it safely.”

The champions’ gaffer is just thrilled the prolific marksman is back in business after sitting out last week’s first leg through suspension and giving his boss an injury scare with a calf knock.

Griffiths has now left the Irishman with a dilemma. He said: “Does he play 60 minutes then come off?

“Or do you put him on to make an impact in the game when it is stretched and there is space?

“I haven’t spoken to him. I just need to know he is available.”

Rodgers is expecting the Norwegians to try to frustrate like they did in Glasgow, but he is convinced his men can reach the play-off stage.

He added: “We had 800-odd passes in the first leg. I don’t think Rosenborg will open up too much here. If a team opens up against us, we have the quality in our game to score goals.

“We know we can score and there will be an impetus on the home team to come out a little bit more.

“None of the players are 100 per cent at this stage of the season. That’s the reality of it, they can’t be.

“We have to find a way, though. Our football and positioning was very good in the first leg, we just lacked that bit of a cutting edge at the top end of the field.

“We positioned the team a bit differently at Sunderland, with a few different ideas, and they played with a lot of confidence.

“The one thing we know is that we can come here and score.”