The former Republic of Ireland international hero has cast doubt on the situation with the players and fans desperate for the gaffer to remain in Glasgow.

Speculation has been rife since the Midlands club axed Claude Puel on Sunday following a disastrous 4-1 home loss against Crystal Palace.

Rodgers came onto the radar immediately and bookies installed him as favourite to replace the Frenchman.

The Parkhead gaffer, who was named Ronny Deila’s successor in May 2016, insisted his only focus was Celtic following the 4-1 win over Motherwell in Glasgow on Sunday.

He is now preparing his squad for tomorrow night’s tricky trip to take on Hearts at Tynecastle, a ground where they lost 1-0 earlier in the campaign.

With so much to play for and a historic treble treble on the horizon, the champions are not welcoming this particular sideshow.

Bonner, who was Jock Stein’s last signing for the club in May 1978 and also played under the guidance of Billy McNeill, Liam Brady, Lou Macari and Tommy Burns in a glorious 17-year career at his only team, fears there could be a temptation for Rodgers to return to England after his previous spells at Liverpool and Swansea. 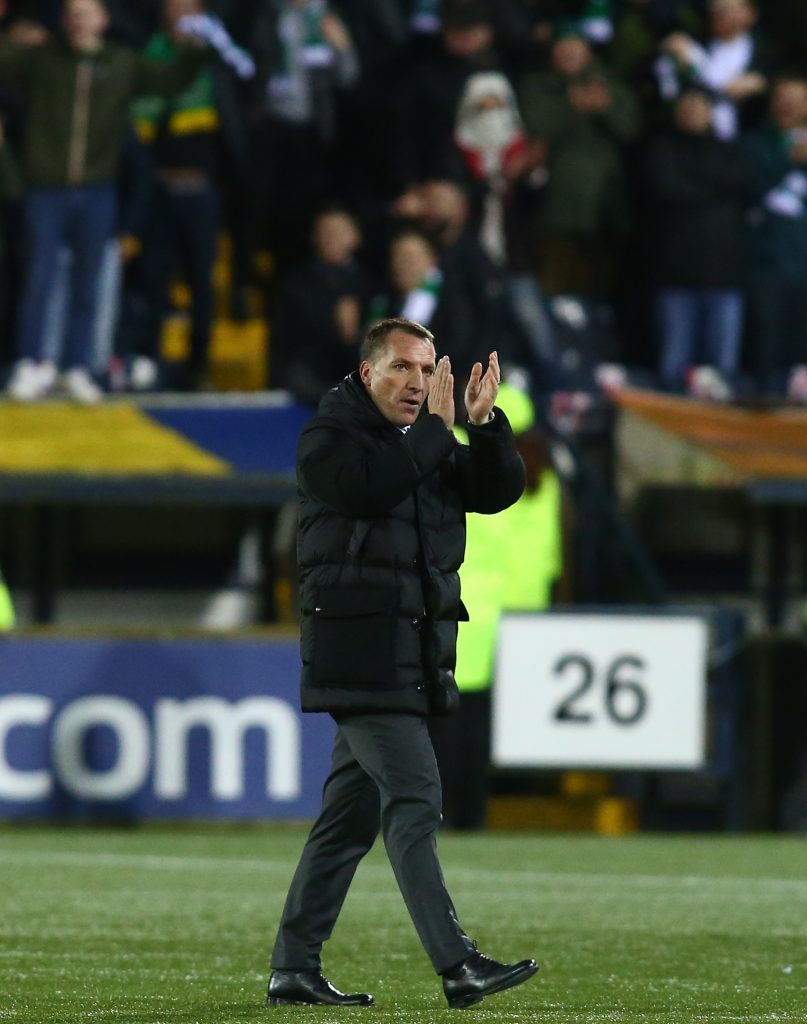 THANKS, FANS…Brendan Rodgers applauds the Cetic support after the recent 1-0 win at Kilmarnock.

The goalkeeping legend, now 58, told today’s Scottish Daily Mail: “Any manager, Brendan Rodgers included, would be interested in that type of job.

“It takes you back into the Premier League, it’s well paid and Leicester have the capabilities of challenging for Europe.

“Whether he would give up this job for it is the big question. He’s well paid also, he’s in Europe, he’s winning trophies, he’s a god as far as the Celtic fans are concerned. Ten-in-a-Row is sitting there for him.

“Is that relationship with the board and Peter Lawwell as solid as it seems?

“Or is there still that throwback to the summer when that relationship wasn’t good?

“Brendan was promised things, they didn’t happen, and they didn’t get into the Champions League.

“Everybody knows he needs to strengthen in the summer. He’s a great developer of young players, but Celtic need more than that – and that takes money.”

Celtic are bracing them for a summer of change when there will be an upheaval among the squad with so many players poised to leave.

For a start, on-loan stars such as Oliver Burke (West Brom), Jeremy Toljan (Borussia Dortmund), Filip Benkovic (Leicester City) and Timothy Weah (Paris Saint-Germain) are due to return to their parent clubs.

Dedryck Boyata will walk free when his deal expires in June and Scott Allan has already agreed a pre-contract with Hibs.

The Celtic support are hoping Rodgers is still there to put the Celtic jigsaw together and lead the team into his fourth year as manager.