BRENDAN RODGERS is hoping his Celtic firing squad have Kilmarnock in their sights at Rugby Park tomorrow afternoon.

The Hoops failed to score against Steve Clarke’s men in their last visit to the Ayrshire venue in February when a goal from Youssouf Mulumbu settled the issue.

The Congolese international midfielder, of course, agreed a two-year deal at the champions last month and is standing by to make his debut against his former side.

Rodgers also saw his side draw a blank when the clubs fought out a scoreless encounter in Glasgow in May.

And the Irishman’s champions have struggled to pile up the goals this season with a mere five from five Premiership outings.

The manager can look at the positive statistic of not having conceded a goal in their past five games, but he is looking for a bigger contribution from his front players – starting against Killie.

He said: “You can’t score perfect goals all the time. That’s probably the bit that’s missing. When you get into the final third of the pitch, you see balls where they just need a bit of subtlety and a bit of softness for a pull-back.

“We’re rifling a cross and you have no chance to finish.”

Celtic were heading for their second successive goalless confrontation on Thursday until second-half substitute Leigh Griffiths provided the winner three minutes from time with a smart header following a Dedryck Boyata knockdown. 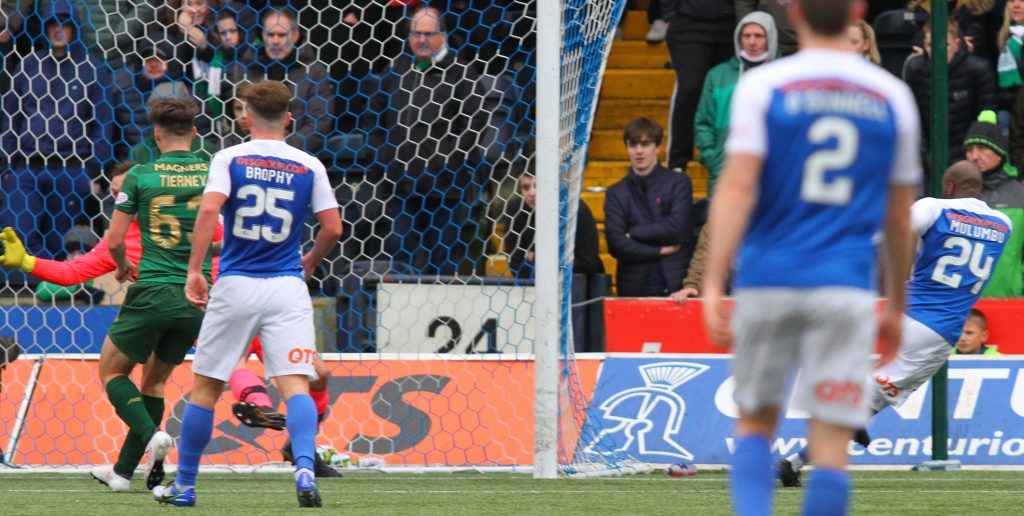 THE WINNER…Youssouf Mulumbu scores the only goal for Kilmarnock in their victory over Celtic in February at Rugby Park.

St Mirren had shut out 10-man Celts – with Olivier Ntcham sent off – the previous Friday and once again the Hoops toiled to make the breakthrough against the Norwegians.

Asked why the team had still to find the form of the previous two campaigns, Rodgers answered: “I’m not sure. It’s a bit of everything, really.

“We lost dynamic players. We have had lots of games. We just have to continue to work hard on the training field and win games when you are not at your best. Being able to win and not give away much is important because that helps your confidence and you grow and grow from there.

“The squad are very honest, a brilliant bunch of boys to work with.

“We haven’t been as dynamic as we have been in the last couple of years. It might be a season for us like that, but we will always find a way and try to find a solution to perform well because performing, for me, is very, very important.”

Reflecting on the display against Rosenborg, Rodgers commented: “The boys put a great effort into the game,.

“I asked them to have this resilience and to have great spirit and persistence to keep going and they did that.

“And they got the win. It was a very good three points for us against a team who came with a huge level of confidence. They won nine of their previous 11 games, and drew two. They were always going to be difficult for us, but we coped well.

“I don’t think we are anywhere near the level of our game. The win was probably down to spirit and persistence.

“Whilst we are not conceding, you just have to keep going. You have to be persistent and you have to trust right to the very end that we will get the goal.

“It will be a tough game for us tomorrow. Steve Clarke’s team are very well organised, tough to break down and are good on the counter-attack.”