The Hoops had faced a gruelling Europa League Group B encounter against RB Salzburg at Parkhead on Thursday night.

The impressive Austrians triumphed 2-1 and put their opponents through the grinder to underline their quality that saw them win all six of their section games.

But Rodgers was more interested on how Neil Lennon’s side were presented with both their goals by the lack of tactical discipline from his players.

The Irishman had to select a line-up without three key defenders in the injured Mikael Lustig, Dedryck Boyata and Kieran Tierney while the influential double-act of Tom Rogic and Ryan Christie were missing in midfield.

Scott Sinclair was asked to play in an unfamiliar right-wing back role and, although he tried valiantly throughout the 62 minutes he was on the field before being replaced by Lewis Morgan, he never looked comfortable in the position.

Rodgers said: “The formation may well have had an effect, but I don’t think it had anything to do with the goals.

“If we need someone to blame, then blame the system – but that was the system because of the players we had available.

“We had to manufacture a way which we thought could get us a result. It’s not what we’ve been for a few months, but we don’t have the same players available.’ 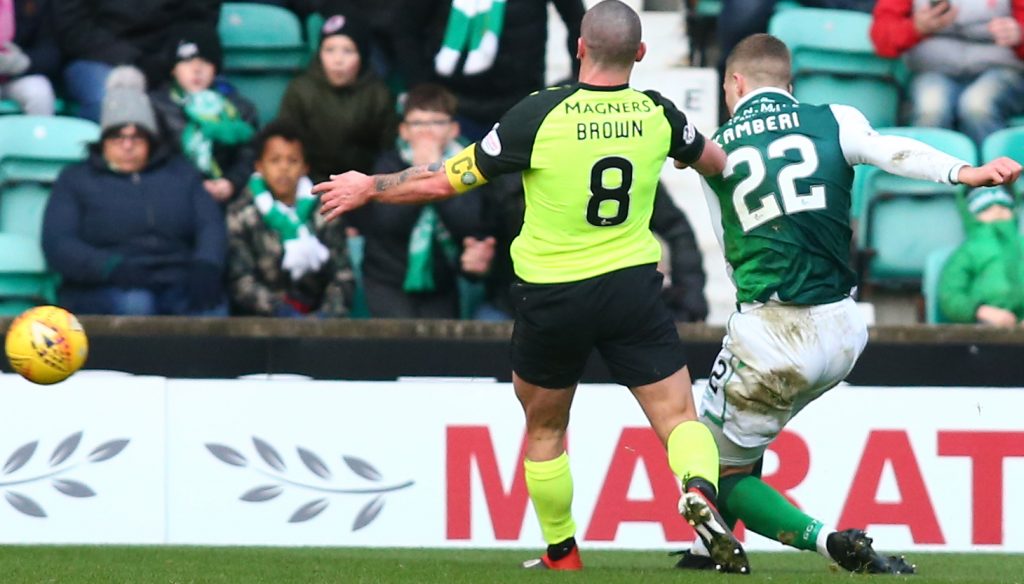 THE KILLER STRIKE…Scott Brown is too late to prevent Hibs’ Florian Kamberi firing in the second goal. Pic: Geo.

Rodgers said tiredness could not be used as an excuse after the exertions against Salzburg which, despite the defeat, saw the team going into today’s Europa League last-32 draw in Nyon.

He said: “It was disappointing, of course, the result and performance.

“We gave away two poor goals from our perspective, nothing to do with energy from Thursday, it was to do with tactical discipline and not concentrating.

“The likes of Callum McGregor was playing his 40th game which is an incredible amount of football – and it’s not even half a season yet.

“But, listen, tiredness wasn’t an excuse for the two goals. That had nothing to do with it.

“When you concede in the first minute, it’s nothing to do with energy, it’s to do with positioning on the pitch and our pressing. And the second one came from our free-kick.

“In the first minute, we left gaps, we pressed at the wrong time and then we didn’t track runners at such an early stage of the game.

“That was disappointing because we didn’t get off to a good start playing against a team that wasn’t overly confident. It’s not as if they have been flying high.

“The second one comes from our free-kick. Again, it’s tactical discipline. We don’t secure the ball at the top end of the field and Scott Brown is left in a two-against-one situation at the back.

“So, two poor goals from our perspective and then we didn’t create enough going forward.

“We had some flashes across the box and what-not, but we didn’t quite have the performance level.”

Celtic now face Motherwell at Parkhead on Wednesday and Rodgers has left his players in no doubt what he expects.

He added forcibly: “We WILL Need to be better.”