DEDRYCK BOYATA and Filip Benkovic will be Celtic’s first-choice centre-backs for the second part of a crucial campaign.

Neither the Belgian nor the Croatian defenders will be at the Hoops next season, but both will be entrusted to play massive roles as Brendan Rodgers’ men eye an unprecedented treble treble.

Boyata will quit the champions when his contract expires in June while Benkovic, who has become a favourite with the Parkhead followers, will return to Leicester City when his loan deal ends.

It seems certain the club will not add to their central defensive position in this transfer window and speculation linking Aberdeen’s Scotland international pivot Scott McKenna, a target last summer, with a £4.5million move to Glasgow is way off the mark.

Rodgers has Jozo Simunovic and Kristoffer Ajer as back-up while last January’s signings, Jack Hendry, £1.3million from Dundee, and Marvib Compper, £1.2million from RB Leipzig, could be on the move in this window. 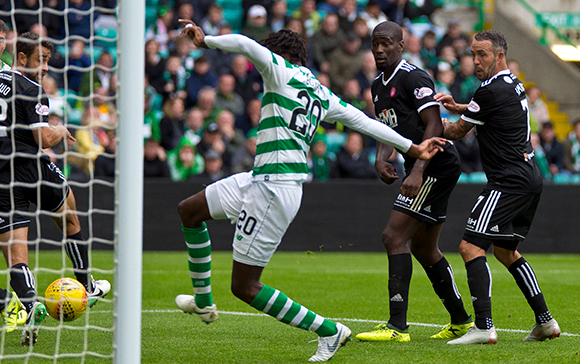 COMEBACK BHOY,,,Dedryck Boyata scores th winner against Hamilton Accies in his first game of the season in August.

A new partnership in the middle of the back four will be a priority for the Celtic manager after this campaign comes to an end with the possibility – or probability – of four Champions League qualifying rounds to be encountered in July and August.

However, the Irishman clearly does not expect to make additions within the next 14 days as he focuses on putting things right this term.

Rodgers said: “I think that will be very difficult to do that this month. To be brutally honest, if we were to bring in someone of the quality we require they would want to play. There are positions we’ll look at, but that is one where a couple of our key players will move on and will need to be replaced.

“Obviously, we have young Kris Ajer and Jozo Simunovic already here. It’s an area of the team we will find it tough to strengthen in January, but it’s a must to do that in the summer.
“It’s a possibility that we will spend more in the next couple of weeks. We’ve brought in a couple of loans and a young boy with potential. I’m not sure – it’s down to availability and also to what’s affordable from the club’s perspective, but I think we’ll look to add to our squad.

“There are also a few lads we’ll be sending out on loan, but there are still key areas we’ve been looking to strengthen over a period of time.”