BRENDAN RODGERS has refused to rule out the possibility of a dramatic comeback for skipper Scott Brown against Rosenborg on Thursday.

The Celtic skipper, who has been out with injury since the 4-2 win over Hibs on October 20, was in the Hamilton stand this afternoon as the Hoops trounced Accies 3-0.

However, Rodgers admitted the 33-year-old midfielder could return to the squad for the Europa League clash in Trondheim.

The champions are level on six points with RB Leipzig but with a poorer head-to-head record against the Germans and the manager recognises a victory over the Norwegians is imperative if his side are to be involved in European football in 2019.

When asked about his captain, Rodgers replied: “It was just too much of a risk today, but he’s been doing really well, so we’ll see how he is over the next few days and, hopefully, he will be in and around the squad.

“If we have a chance to qualify then, of course, it’s a game we’d want to win.” 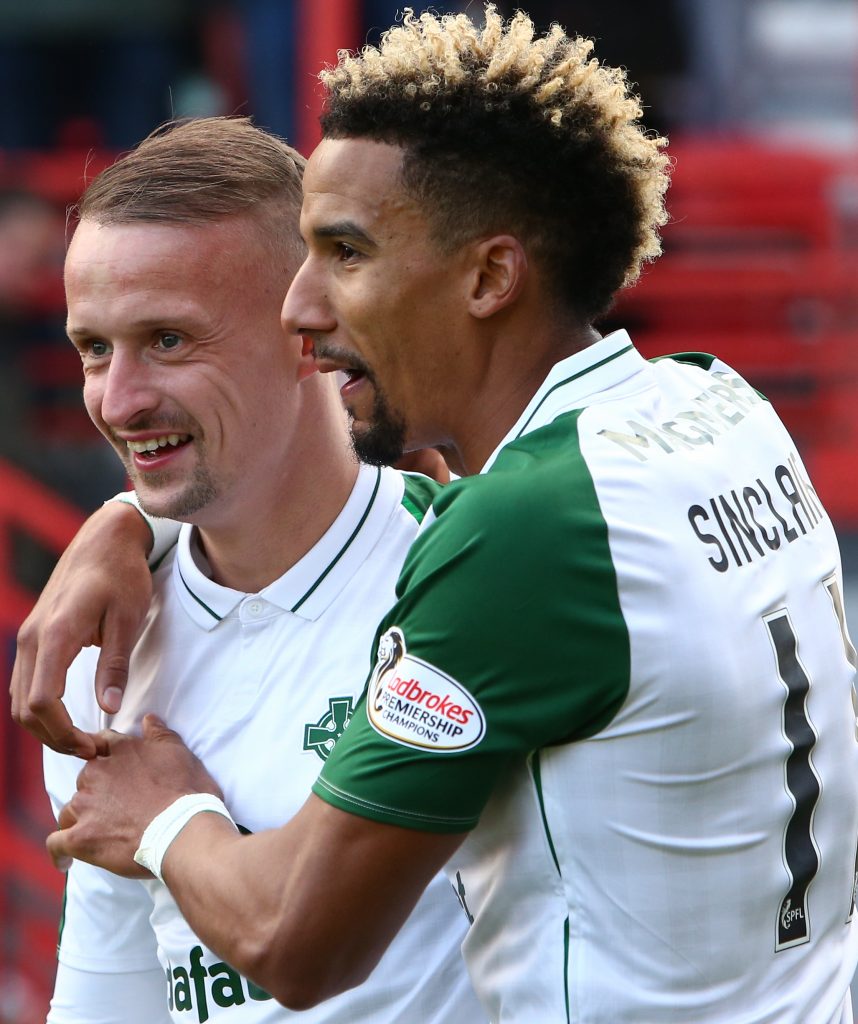 THAT’S MY BHOY…Leigh Griffiths is congratulated by Scott Sinclair following his goal in the 3-0 triumph. Pics: Geo.

Leigh Griffiths returned to action when he came on as a second-half substitute for Odsonne Edouard and he blitzed in the third goal with a rasping free-kick.

The Parkhead gaffer added: “It’s important he’s a very good player within our squad and you know that 25 yards in he’s a real goal threat. He took his free kick really well, a wonderful strike and a good finish for him.

“The stadium was a little bit quiet today for some reason. I don’t think we were ever in any sort of trouble, but, of course, when it is 1-0 there’s always a risk when you go into the latter stages of the game.

“It only takes one mistake or one moment of quality from the opposition that can peg you back.

“But I thought in the main we had good control of the game and then worked our way through. We had trust in our possession which was important and created some chances. We got three goals and, equally important, we worked very hard to not concede and it was a good three points.

“That’s the idea you want to be clinical in those moments. We’re in good rhythm now, there’s a good flow in the team. You can see the speed of the passing, the combinations and our quick play is obviously working well.

“And of course after the international break you want to get three points on the board.”

Olivier Ntcham also returned to the fold following his spell on the sidelines after he limped off at half-time during the 3-0 win over Hearts in the Betfred League Cup semi-final at Murrayfield last month.

The French ace saw a lot of the ball against Accies, but Rodgers accepts he can do a lot better.

He added: “Some of his passing was just out and maybe he dwelt on the ball too often on occasion.

“Overall, though, it is great to have players coming back for the game that lie ahead before the turn of the year.”