BEAMING Brendan Rodgers described the equalling of Celtic’s own 100-year UK record of 62 unbeaten domestic games as a “phenomenal achievement”.

But the Hoops boss admitted that some of the shine was taken off the remarkable achievement by being held 1-1 by Kilmarnock at Parkhead – the club’s third stalemate at home this season following a 1-1 result against St Johnstone and a 2-2 draw with Hibs.

Rodgers said: “The players will probably feel disappointed, like we all are, having only drawn the game.

“It doesn’t feel so good now, but the players will go into history.

“They have an opportunity next week against Ross County in the league to go out on their own. 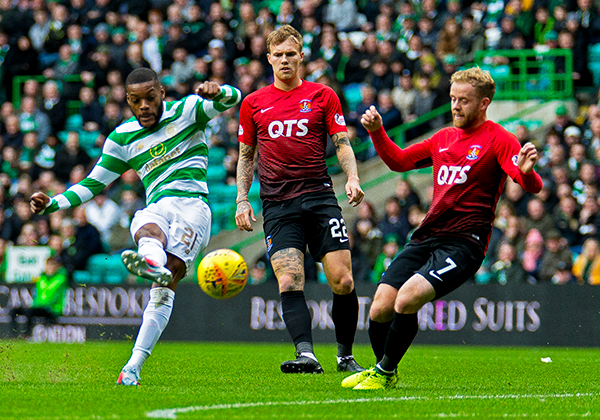 “If you take it over the piece, over 17 months, to get to 62 games – and I think win 56 of those – it is a phenomenal achievement and shows the level the players play at.”

The Hoops took the lead through Leigh Griffiths two minutes before the break, but Jordan Jones equalised on the hour.

Rodgers added: “It was a disappointing result for the amount of ball that we had and taking the ball to really good areas of the field.

“It doesn’t happen too many times, but our quality in the final third was probably not as precise as we would normally have.

“It was frustrating. That was partly us, but it was partly Kilmarnock as well because they defended very well with lots of bodies in that final third of the field and we just struggled to break it down.

“Kilmarnock had very obviously come to get those 11 guys behind the ball and then to maybe get some joy on the counter-attack.

“We threw everything into the game but just couldn’t quite make the breakthrough.”

Brendan’s new book – Brendan Rodgers – The Road to Paradise is now available from CQNBookstore.com – the first 100 copies sold will all receive a free gift with your book.

BRENDAN RODGERS – THE ROAD TO PARADISE is available now from CQNBOOKSTORE.COM