BRENDAN RODGERS has fired a warning to Leigh Griffiths and reminded the striker he is NOT on holiday.

The 28-year-old Scotland international checked into rehab last month after the Celtic manager admitted the player had “ongoing issues”.

However, images emerged of the troubled forward attending a race meeting at Newcastle at the weekend which prompted Griffiths to take to social media to hit back at claims he suffers from either a gambling or drug addiction.

He has been left behind for professional treatment while his team-mates attend the winter training camp in Dubai and Rodgers said: “Leigh was off on grounds of his health, so the club are supporting him with that.

“I’ve nothing much more to say on it until I, one, speak to Leigh and two, see something. But that will not be until I get back.

“I just need to see where it is all at because he is not on holiday. I think it’s one where I will take a deep breath and look at it.

“That’s about getting specialist help and lying low and focusing on the simple things in your life that will allow you to be better.

“I haven’t spoken to him yet. A designated person at the club is dealing with everything with regards to Leigh and I will pick that up when I get back.” 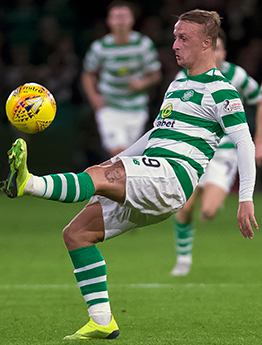 UP IN THE AIR…Leigh Griffiths juggles with the ball.

There is no timescale for Griffiths to return to action and the Parkhead gaffer, speaking after the treble signing of Vakoun Issouf Bayo, Timothy Weah and Oliver Burke to boost his attacking options, warned the prolific hitman the club can only help him if he wants to help himself.

Rodgers added: “Ultimately, he is a Celtic player and the club are paying him a lot of money.

“But, in these instances, you have to support the player. Money doesn’t count for anything if the player isn’t in good health.

“We need to support him, which the club is doing amazingly. But there is also a responsibility for Leigh Griffiths.

“Players who have dealt with any types of issues, it’s admitting that responsibility and knowing where you are at, really.

“It’s the only way you have to move forward, really. It is important, if you have these issues – there are ways in which to deal with it.”

CQN reported on Sunday Griffiths’ angry reaction to the newspaper pictures which appeared to show him drinking and gambling in Newcastle.

He put out a statement saying: “I am off work due to my mental health state. NOT GAMBLING, DRUGS, or any other issue that has been written about me since December.

“The stories, the tweets, the lies that come out people’s mouth is laughable, but I suppose if they’re talking about me, they are leaving someone else alone.”