BRENDAN RODGERS has called time on Moussa Dembele’s efforts to be fit in time for tomorrow night’s Champions League qualifier against Rosenborg at Parkhead.

And the Celtic boss revealed the French striker will miss BOTH legs of the second round qualifiers against the Norwegians.

Dembele could be out for three weeks which would mean he would be sidelined for the first game against AEK Athens – if the Hoops reach the next stage.

The frontman sustained a tight hamstring after scoring two goals in the 3-0 victory over Alashkert last week.

He was taken off as a precaution in the 64th minute and Rodgers hoped his player would make a swift recovery.

However, the Hoops gaffer admitted: “Moussa will be out for a few weeks. 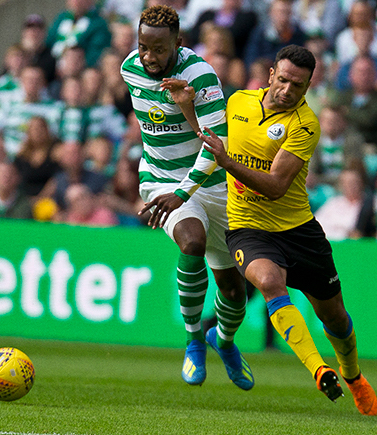 “Thankfully, it’s not a longer-term hamstring. Sometimes these things can be six to eight weeks, but it’s not that – it’s two to three weeks maximum. It was unfortunate for him as he’s looked very fit in pre-season.

“It’s such a difficult period of the season as you’re having to get players to a level of fitness, whilst trying to put together a team that can cohesively work together to gain results in arguably your biggest games.

“It’s a very tough period and also difficult for the teams in the Betfred Cup as they’re virtually being judged straight away as the season has just started, and the players aren’t clearly at their highest levels of fitness.

“We have periodised our programme, knowing the intensity of the games we’d be playing. Bear in mind we also played a lot of the game last week with 10 men, so it gave us a chance to work on things and we go into the game on Wednesday fully prepared.”

Odsonne Edouard could also have been missing after giving his boss a fright when he turned up at Lennoxtown yesterday.

Rodgers added: “We had a scare with Odsonne, as well, and he only just rejoined us on Monday. After the game, his knee had swollen up. He hadn’t trained for a few days, but he looked fine in training.

“Whether Odsonne is up there on his own or he’s playing with someone, he’s already proven, he can play the role really well.”

Leigh Griffiths has been training for the past couple of weeks, but it is unlikely the Parkhead chief will take a chance with the Scotland international.

* Rodgers was speaking to The Celtic View, out tomorrow.