BRENDAN RODGERS saluted matchwinner Leigh Griffiths for snapping up the only opportunity that came his way after coming on as a 76th-minute substitute against Rosenborg last night.

The stuffy Norwegians were within three minutes of a point from a goalless deadlock in the opening Europa League Group B confrontation at Parkhead.

On a night of frustration in the east end of Glasgow, there was a distinct lack of goal threat from the champions with £9million man Odsonne Edouard eventually replaced by the Scotland striker.

Griffiths claimed the all-important clincher with a sublime close-range header after taking up a fabulous position while anticipating a knockdown from Dedryck Boyata.

Hoops boss Rodgers said: “What we know with Leigh is he can score goals. So, you fancy him in a game like that, if there is a chance he can take it and it was the only chance he had in the game.

“He read the ball into the box, anticipated it and it was a great finish.

“I love working with him. He is vital to this club and squad because whether he plays or is on the bench, he wants to play for Celtic, he has that hunger. 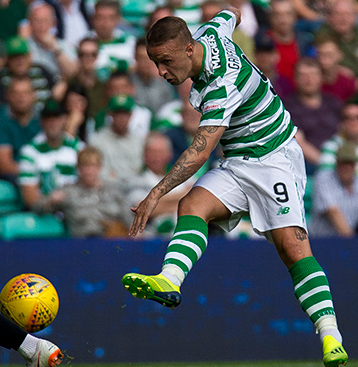 “It is not just Leigh, every player needs to improve, every player has the responsibility to get better, especially at the top end of the field.

“A night like this is brilliant for him. He knows when he comes on the pitch, if he gets an opportunity, there is a big chance he will score and we need that in the team.

“He is 28, he signed a four-year deal. We still think there is more improvement that he can make, but not just him, the rest of the players, as well.

“So, I’m delighted for him and all the players and it is the first three points in the group stage.”

Rodgers added: “It was against a Rosenborg team who had won nine and drawn two, so they came here with a real confidence.

“They surprised us a little bit for the first 20 minutes, played a diamond and they had never played that when we had analysed them, but once we found the balance to play against that we started to come into the game.

“Without being at the top of the game, we kept going. I said to the players that we had to find a way to win and the players did that.”

Rosenborg boss Rini Coolen said: “We are disappointed to lose the game. We deserved a little bit more. We had a different game-plan and the execution was okay. It is a mixed feeling, disappointed but happy and proud.”

Now all eyes will be on Rugby Park on Sunday when Rodgers takes the champions to face Kilmarnock who won 1-0 the last time the teams locked horns in Ayrshire.

Ironically, Youssouf Mulumbu scored the only goal that afternoon and he will be in the Hoops squad for this one after agreeing a two-year deal last month.

However, more intriguingly, will be discovering who will lead the Celtic attack – Edouard or Griffiths? Only one man has the answer and he isn’t showing his hand at the moment.