CELTIC legend Davie Hay admits he can understand the resentment of disappointed fans following Brendan Rodgers’ swift exit from the champions this week.

With 11 league games to play and the maximum of three Scottish Cup-ties to be faced, the Irishman was on the brink of making history with the Parkhead club.

The team had an eight-point advantage at the top of the Premiership and on course for an eighth successive title success.

On top of that, a historic hat-trick of Scottish Cups, something the club had never achieved before, was on the horizon.

With the League Cup already in the trophy cabinet in the east end of Glasgow, there was the unprecedented treble treble within touching distance.

However, Rodgers turned his back on the club he professed to love and agreed a three -year deal with mid-table Leicester City.

Plus he took his backroom staff of assistant boss Chris Davies, Kolo Toure and Glen Driscoll with him to the Midlands outfit leaving the Hoops hierarchy little time to put together a new team with a game against Hearts due in 24 hours.

Peter Lawwell swiftly promoted coach John Kennedy to assistant boos, he brought in Damien Duff from the reserves to take over his role and Neil Lennon returned in a interim basis until the end of the season. 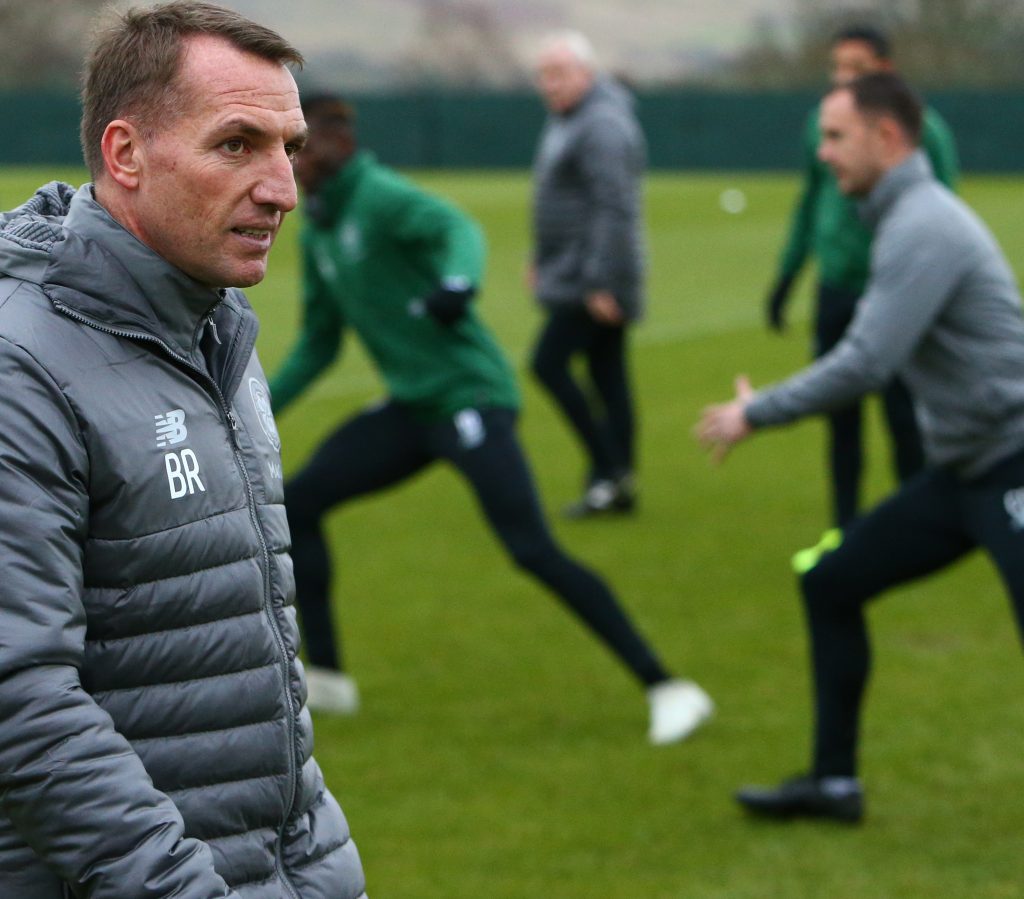 LOST IN THOUGHT…Brendan Rodgers in one of his last training sessions at Lennoxtown.

Rodgers’ hasty departure clearly does not sit well with Hay, the former manager and player who is now a Celtic ambassador.

The genuine icon, speaking in the Evening Times, said: “The prevailing feeling now of anger is justified.

“Not to the extent of the nonsense that we watched with some pathetic video clip of so-called supporters chanting an odious song in an Edinburgh pub. That was nothing short of disgraceful and besmirches the reputation of the club.

“That was a disgrace and a genuine affront to Celtic.

“But, in a wider sense, I can understand the sense of hurt which the Celtic fans have.

“And when that hurt stars to abate then what you get is anger. What it boils down to is a feeling of being utterly sold out.

“The timing of the move is all wrong, but more than that it is the fact he is opting to go elsewhere after banging the drum of being a lifelong Celtic supporter.

“That is what has got under the skin of the fans because there is a real feeling that Brendan sold everyone a narrative that doesn’t entirely ring true now. 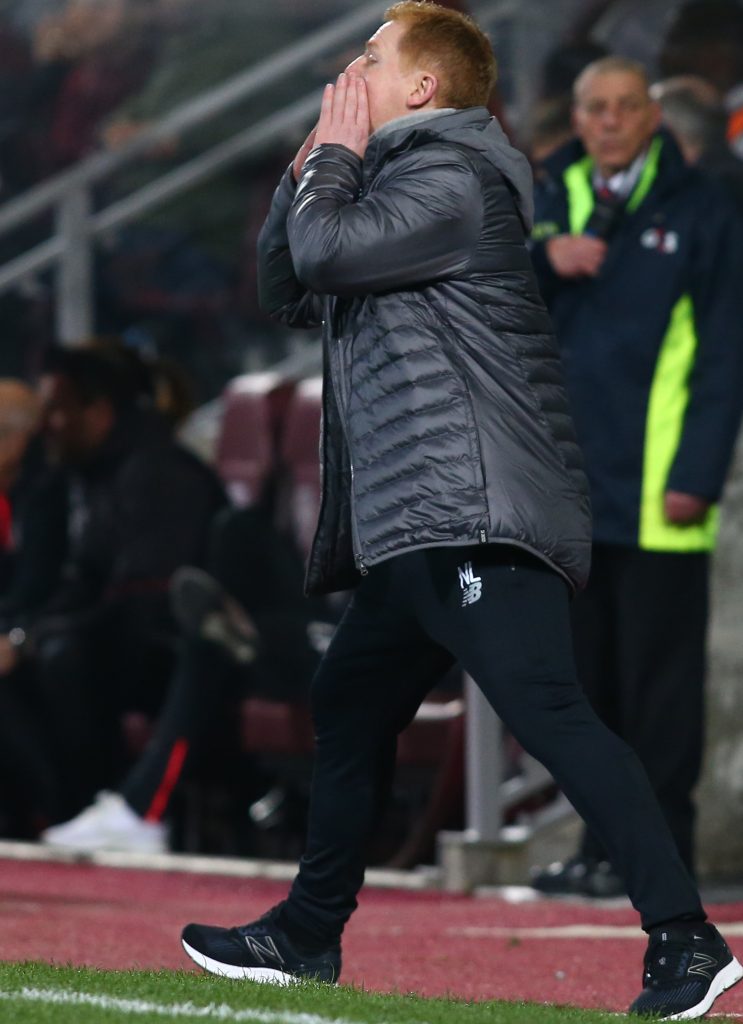 IN WITH A SHOUT…Neil Lennon calls out instructions at Tynecastle in midweek.

“There isn’t one supporter who heads along to Celtic Park every week who would have walked out on the club when they were on the cusp of doing something historic.

“You can’t be telling everyone that you are in your dream job at the club you love and then skip out of the back door and leave everyone in the lurch.

“And, for me, if Celtic are successful in going on and completing the treble, then the players and Neil Lennon will deserve huge credit.

“Of course, Rodgers has laid the groundwork for that to happen.

“He has taken the club to this stage, but someone now has to go and finish it.

“And Neil Lennon was an absolute no-brainer for me.

“He is the right choice to take the job in the short term and I see no reason why he should not be there in the long-term.

“But what you have to say just now is that if Brendan had stayed at Celtic until the end of the season, he would have gone down as one of the all-time great Celtic managers. 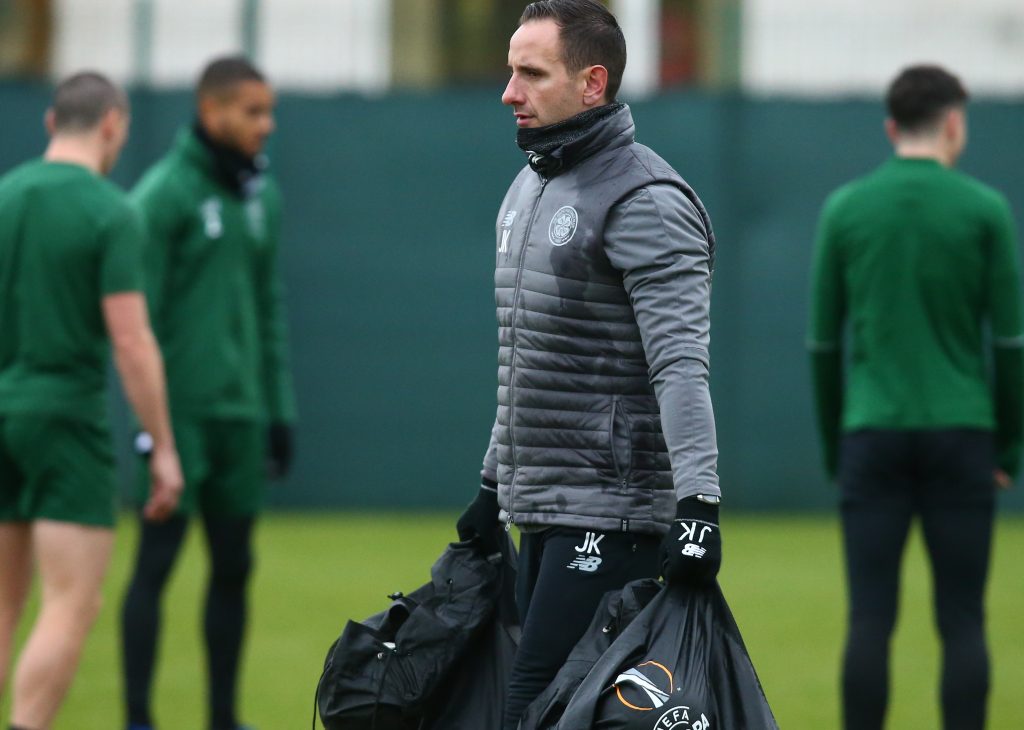 THE WAY AHEAD…John Kennedy keeps a watchful eye on training.

“No-one will ever surpass Jock Stein and what he achieved, but Rodgers would have been in pretty elevated company had he delivered a third successive treble this season.

“I don’t think there would have been too many dissenting voices if he had turned around at the end of the season and said that he wanted to get back down and work in the Premier League and make the most of the resources that are available to them.

“I’m afraid now that is no longer the case.”

Thankfully, Lennon hit the ground running in Edinburgh on Wednesday night when Odsonne Edouard, who had been introduced as a 62nd-minute substitute for the impressive Ewan Henderson, tucked home the winner in stoppage time for a 2-1 triumph.

Now, with 10 league games to play, the crown has edged even closer to its home in Paradise.

Lennon’s focus will now shift to the Scottish Cup tomorrow night and another visit to Edinburgh for a quarter-final confrontation with his former club Hibs at Easter Road.

The sense of pride at being handed the responsibility of guiding Celtic over the line and into the history books will not be lost on this Irishman.