EXACTLY one year and one day ago, Celtic crashed out Europe following a 1-0 loss in Valencia to exit on a dismal 3-0 aggregate.

And the champions have undergone some startling changes since that disappointing Europa League evening at the Mestalla Stadium.

No-one knew at the time, but Brendan Rodgers would be in charge of the Hoops for only one more time – a 4-1 Premiership home win over Motherwell three days later – before quitting in sensational fashion to take over at Leicester City.

The Irishman took assistant boss Chris Davies and coaches Kolo Toure and Glen Driscoll with him to the Midlands outfit leaving Celtic without a backroom team for the crucial league match against Hearts at Tynecastle 24 hours later.

Neil Lennon answered the SOS and John Kennedy was immediately named his No.2. The double-act gelled and the historic treble treble was delivered at the end of a topsy-turvy campaign. 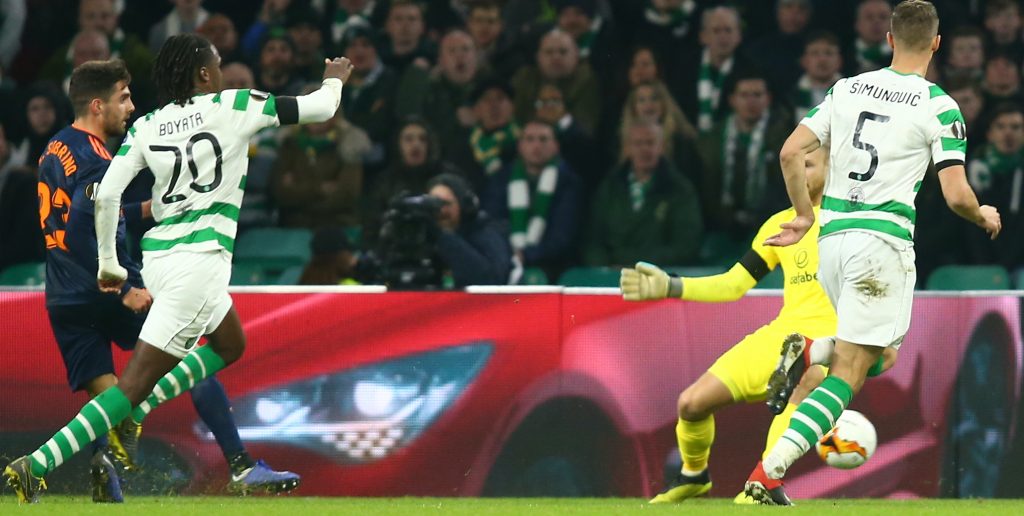 HEADING FOR THE EURO EXIT…Ruben Sobrino slots in the first goal beyond Scott Bain with Dedryck Boyata and Jozo Simunovic looking on.

In the opening game against the Spanish cracks, on February 14 which turned out to be a mini-Valentine’s Day Massacre at Parkhead, Rodgers, with Scott Bain in goal, fielded a back four of on-loan Jeremy Toljan, Dederyk Boyata, Jozo Simunovic and Emilio Izaguirre.

The Croatian centre-back is the only one of that quartet still at the club after the German right-back returned to Borussia Dortmund when his temporary deal expired. Boyata joined him in the Bundesliga at Hertha Berlin at the end of his contract and Emilio Izaguirre also quit and headed home to Honduras.

Scott Brown and Callum McGregor were in their usual midfield berths while James Forrest was wide on the right. 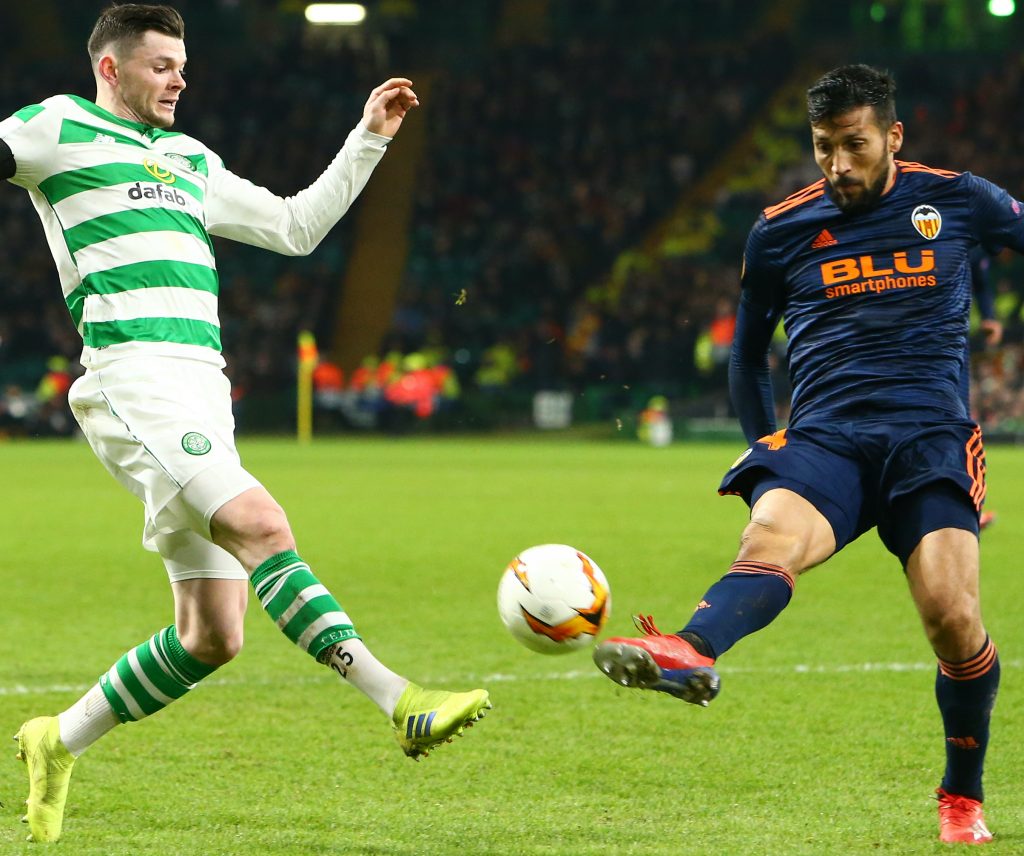 S-T-R-E-T-C-H…but Oliver Burke is out of luck as a Valencia defender clears.

Ryan Christie started, but was substituted by Odsonne Edouard in the 58th minute and Timothy Weah, on loan from Paris Saint-Germain, came on at the same time from Scott Sinclair, who, of course, is now at Preston in the English Championship. Oliver Burke, who had arrived at the same time as Weah on a temporary shift in January from West Brom, led the line.

CQN‘s on-the-spot match report stated: “It was as sloppy a performance since Brendan Rodgers arrived two-and-a-half years ago, 90 minutes laced with misplaced passes and little invention against clever opponents.”

It continued: “The only goal of the opening 45 minutes highlighted the errors made by the home side that exposed them to a quick break. Callum McGregor was robbed of possession and the ball was moved swiftly to skipper Daniel Parego.

“His pass forward was immaculately timed and, unfortunately, Emilio Izaguirre played Ruben Sobrino onside. He took off towards the Celtic goal as Dedryck Boyata and Jozo Simunovic struggled to get back.

“Sobrino enticed Scott Bain from his line before rolling the ball into the path of the unmarked Daniel Cheryshev and he will never get an easier opportunity in his career. He merely touched the ball over the line and Celtic Park fell silent. 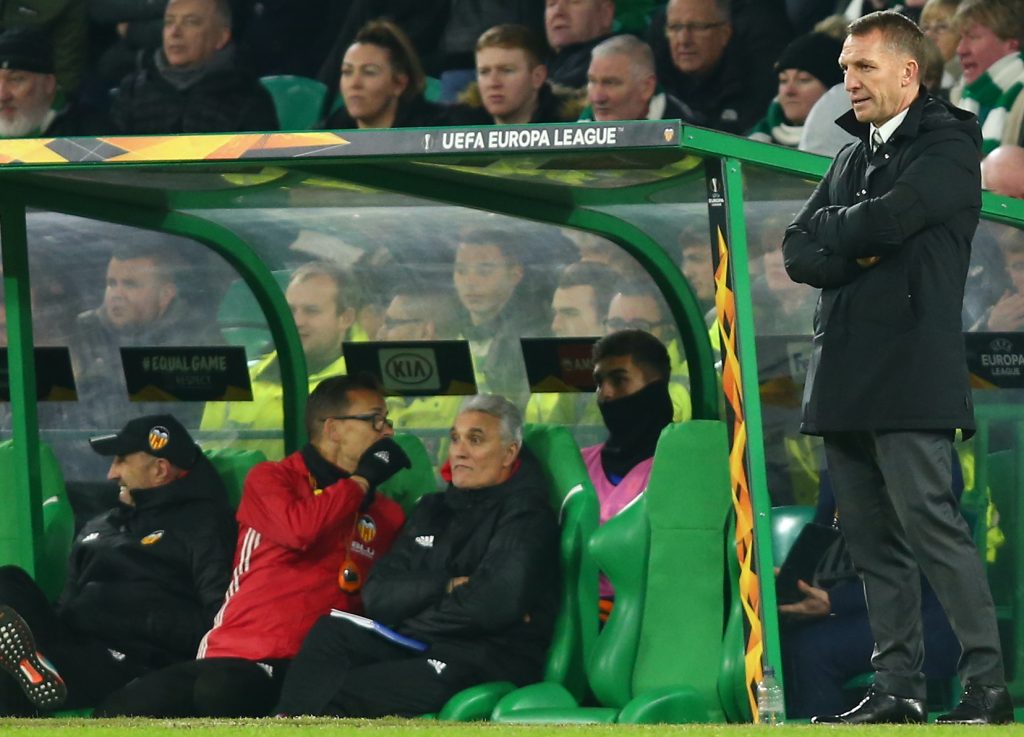 THE END IS NIGH…Brendan Rodgers watches from the sidelines as his Celtic European adventures are about to come to a halt.

“Four minutes after the turnaround, the Spaniards doubled their lead and it was all over bar the shouting. McGregor, Brown and Toljan all had the opportunity to win the ball, but as they dithered a pass was worked to Cheryshev on the left.

“One glance up told him Sobrino was in the clear, racing in behind Simunovic and in front of the unaware Izaguirre. The pass arrived on time and was knocked past the unprotected Bain from five yards.

“Flaws were exposed and it was a night to forget for many. Izaguirre did very little in pushing the ball forward and seemed content to play it square and back all night when a bit more adventure was required. He was exploited time and again, but, to be fair to the Honduran, he was not the only Celt to put in a wretched showing.” 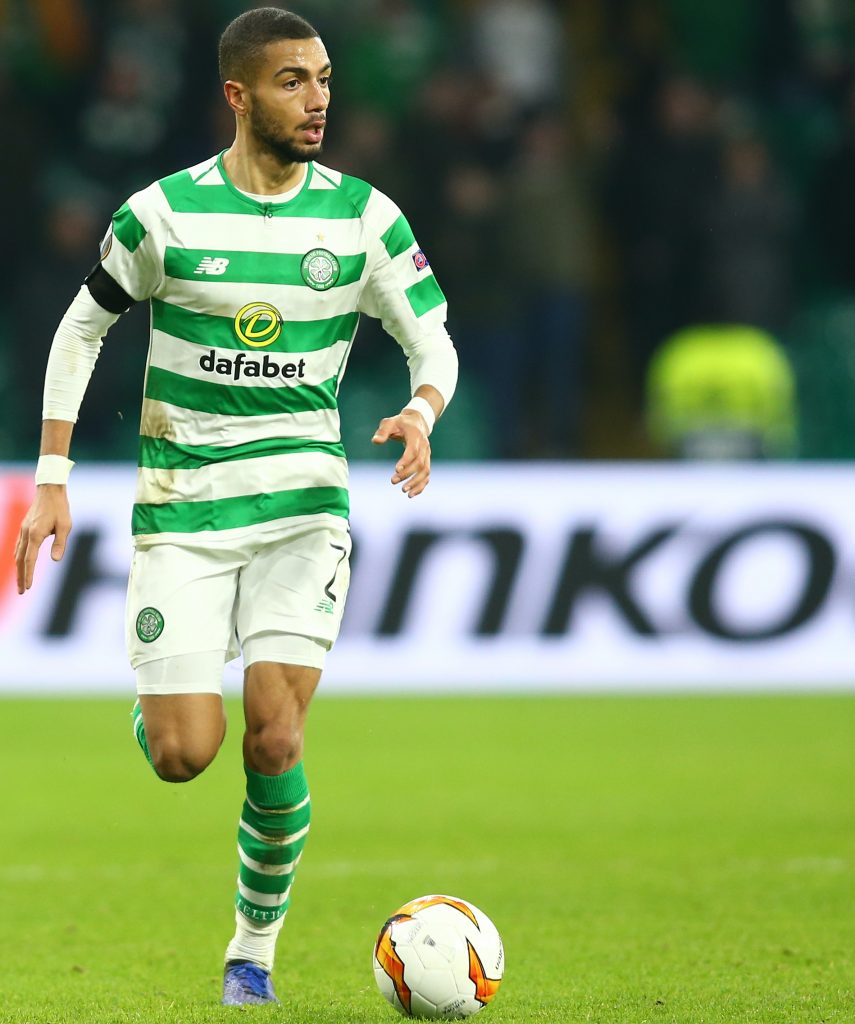 A week later, Rodgers led Celtic for the last time in European competition. The visitors showed up well for most of the first-half, but the game plan was wrecked with the 37th-minute dismissal of Toljan.

CQN stated: “At the end of a courageous, gutsy performance, the Hoops are still without a win on Spanish soil and their Europa League hopes are over.

“It was a glorious failure from a team that found themselves a man short for 53 minutes against a very good Valencia following the diabolical dismissal of Jeremy Toljan for two innocuous yellow cards.

“By the 36th minute, Celtic had eight attempts at goal with two on target, the same amount as the entire match at Parkhead last week.

“By the 37th minute, they were down to 10 men following some crazy refereeing from match official Deniz Aytekin who sent off his fellow-German Toljan after flashing a second yellow card at the right-back. 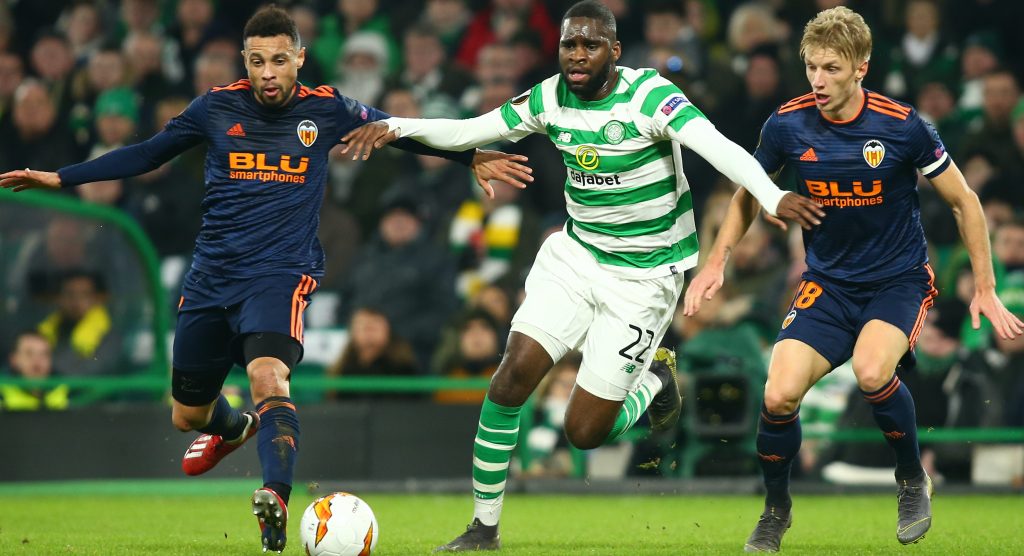 MAN IN THE MIDDLE…Odsonne Edouard tries to burst through the Valencia defence.

“There wasn’t much in the first caution as he was punished for a tug on an opponent, but the second was a stumble by the on-loan Borussia Dortmund defender into a Spaniard who was coming in on his blindside.

“There was a tangle of legs as both players toppled to the turf. Astonishingly, the whistler reached for another yellow and a bemused Toljan was banished.

“The red card changed the entire complexion of the contest. Until then, the Hoops were in control and looking extremely comfortable.”

The report concluded: “In the 62nd minute, Kristoffer Ajer had a miss that will haunt them for the rest of his career. Ryan Christie arced in a splendid and inviting free-kick from the right.

“The Norwegian skyscraper timed his run forward to perfection to be left with a free header, but from a mere four yards, he thumped an effort over the bar with the goal gaping.

“Eight minutes later, it was all over. Jonny Hayes lost the flight of a long diagonal cross from the left by Parejo, Wass headed down to substitute Kevin Gameiro, who had just joined the action, and he nudged the ball goalward.

“Bain tried desperately to block the close-range effort, but, alas, the ball struck the keeper and diverted over the line.

“It was that sort of night for Celtic.

SPANISH SIGHS…Europe competition is all over for another season as Timothy Weah, Jeremy Toljan, Oliver Burke, Scott Bain and Ryan Christie look dejected.

“Brendan Rodgers sent on Odsonne Edouard for Forrest in the 63rd minute and then put on Mikey Johnston for the tiring Burke 10 minutes later.

“The team is certainly worthy of a round of applause after a real backs-to-the-wall display against quality opposition that, with a little bit of good fortune, might have produced an entirely different scoreline.

“This last-32 tie was not lost in the Mestalla this evening. Sadly, it was surrendered in Glasgow a week ago.”