BRENDAN RODGERS has called for assistance from local and central government to help solve the plastic pitches problem.

The Celtic boss takes the champions to face Livingston tomorrow and attempt to perform on one of the three synthetic pitches in the top flight.

Rodgers understands the West Lothian club, along with Kilmarnock and Hamilton Accies, have sound economic reasons for playing on such surfaces.

He said: “I have always said that, for me, the Premiership is the flagship of Scottish football and there should not be astroturf pitches in it. Simple as that.

“I also think the teams which do have them probably need some help, as well. They obviously need to generate money, that’s why they do it.

“But let’s see if government, if councils, can help the teams that have them find an artificial pitch somewhere else close by and let the main stadiums be grass.

“We are trying to promote a level and a standard. Whether we like it or not, that doesn’t make your flagship league here in Scotland the best standard.

“I respect and understand all the other stuff that comes with the community clubs. It’s not just their fault. They need help. So can we, in football and in government, help the teams?” 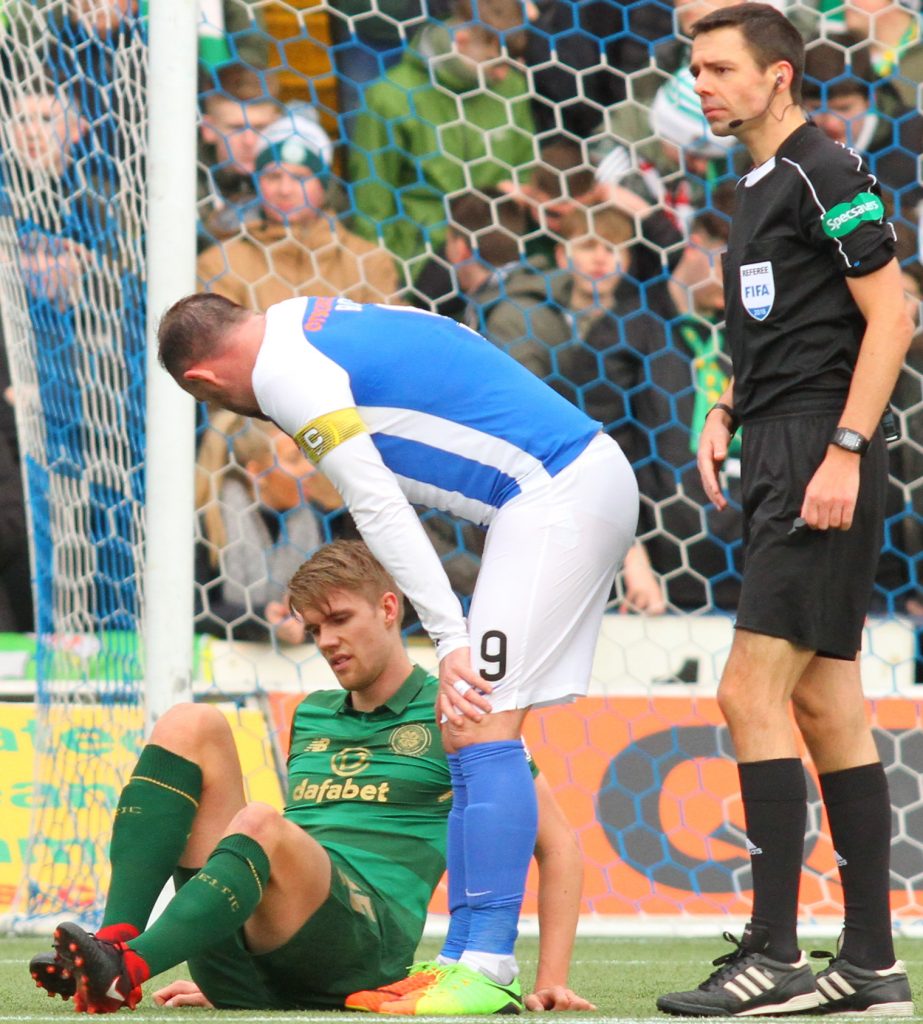 PITCH BATTLE…Kristoffer Ajer is the loser on Kilmarnock’s plastic surface as he goes down with the injury that saw him limp off in the 1-0 defeat in February. Striker Kris Boyd and referee Kevin Clancy look on. Pic: Geo.

Rodgers added: “There are enough teams, Motherwell and Dundee, Partick Thistle, when they were there, St Johnstone, that have fantastic pitches.

“St Johnstone have a lovely grass pitch and just outside of it they have an astroturf pitch to make the money from the community.

“If they need to train and work there, that’s what they do. So, we have to promote a standard because it is beamed around the world.

“I think it’s about standards and the quality of game for supporters. I have never seen a good game on an astroturf pitch. I’m sure we’re not going to see the best game at the weekend. But we have to find three points.”

The Hoops gaffer may be forced to rest on-loan Croatian Under-21 international defender Filip Benkovic against Gary Holt’s side.

He was due to play at Rugby Park earlier in the campaign, but pulled up before the kick-off and had to be replaced by Jack Hendry.

Rodgers has also left out Jozo Simunovic for matches at the home of Killie for fears of injury on a surface with no give.

Last season, the Hoops toiled following Dedryck Boyata and Kristoffer Ajer limping off early in the first-half and Steve Clarke’s men capitalised with a 1-0 win, Youssouf Mulumbu, now at Parkhead, of course, claiming the encounter’s matchwinner.

Let’s hope someone in authority is listening to the words of the Celtic manager.