BRENDAN RODGERS has revealed he was “very proud” of Dedryck Boyata for battling for an hour against Aberdeen in Celtic’s Betfred League Cup Final success at the weekend.

The Belgian central defender was involved in a sickening head collision with former Hoops team-mate Gary Mackay-Steven in the first-half.

Boyata had to leave the pitch with blood on his jersey, but he returned a few minutes later with the wound stitched and his head swathed in bandages.

Mackay-Steven was stretchered off and taken to hospital before making a recovery.

The classy centre-back shrugged off the injury to set up the winner for Ryan Christie with a superb through pass deep into first-half stoppage time that was netted at the second attempt by the midfielder.

However, Boyata had to admit surrender in the 60th minute when he limped off with a hamstring problem and was replaced by Jozo Simunovic.

Now the international pivot is a doubt for the Hoops as they prepare for tomorrow night’s Premiership tussle against Motherwell at Fir Park.

Rodgers said: “I was very proud of Dedryck. 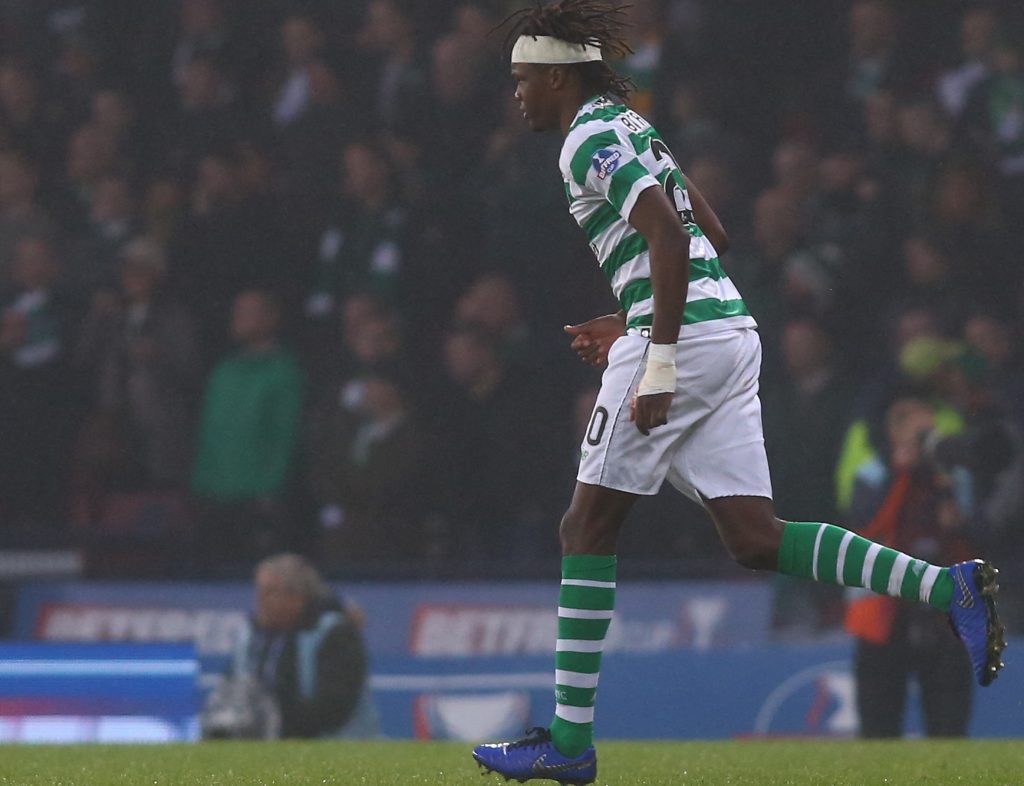 RETURN OF THE HERO…heavily-bandaged Dedryck Boyata races back onto the pitch after touchline treatment. Pic: Geo.

“It was a tough summer for him in every way, but it is really satisfying to see how he has got over that and how he has performed.

“Since he had that episode he has been absolutely brilliant for us. That partnership with Filip Benkovic has been very good. Boyata gives everything to the cause and he is super professional.

“He has played a lot of games now for the No1 ranked team in international football, Belgium.

“That really shows where has come from to where he is at. It is a big credit to him.”

The champions’ gaffer added: “Boyata is in the last year of his deal, but I am quite relaxed on it. He has to look at every option possible.

“He has created a market for himself now because of how he has performed, which is great for him.

“Careers are short. There has been no lack of commitment from Boyata since last summer, as you have seen.

“But, as a professional player, he has every right to wait and see what happens.

“I can assure everyone that doesn’t take away from his commitment to what we’re doing here.

“The next contract may be the last big one of his career as he is 28 now and he just has to make sure it’s the right one.

“I am relaxed with it because there has been no drop off in mentality. There has never been with him.

“He has been absolutely first class for me. We will just assess the situation as time goes on.

“We know at some point we will lose some of these players. But at the minute we know where it’s at.”