BRENDAN RODGERS has welcomed the challenge from other teams as he prepares to guide Celtic back to the Premiership pinnacle before the turn of the year.

The champions, bidding for their EIGHTH successive crown, face Motherwell at Fir Park this evening to kick off seven crucial league games with 21 points up for grabs.

Rodgers is happy to pick up the gauntlet and said: “The competition is there, we can see that. Rangers have got better, there’s no doubt.

“The other teams, Kilmarnock, now consistently showing that it’s no fluke, they are there and doing really well.

“Hearts and Hibs have hit a bump on the road, but they, too, have been very good.

“The competition is good and will make us better, even though we set our own standards.” 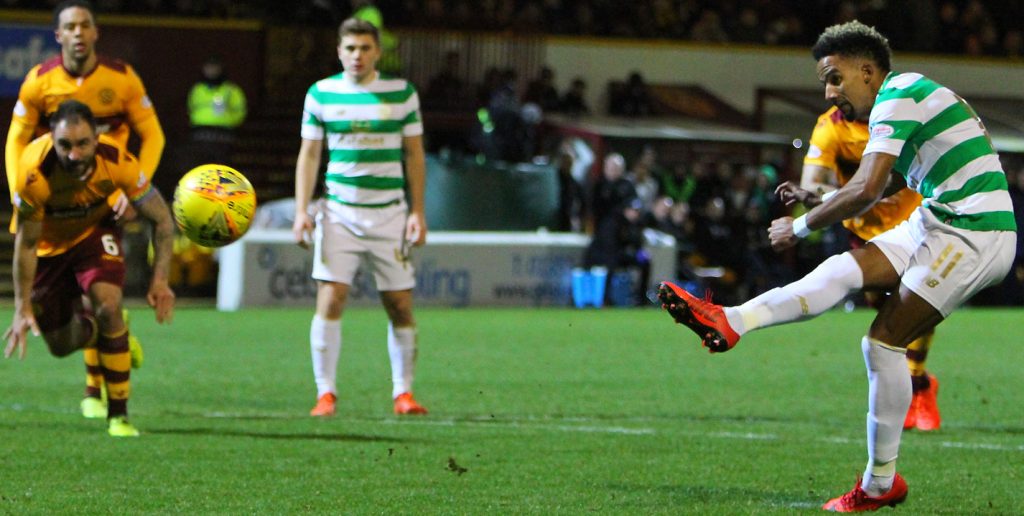 THE EQUALISER…Scott Sinclair slams in a penalty-kick in the 1-1 draw at Fir Park in November last year. Pic: Geo.

After tonight, the Hoops will host Kilmarnock on Saturday before Thursday’s tie against RB Salzburg in the final Europa League Group B confrontation at Parkhead where one point will see Rodgers’ men through to the knock-out stages next year.

Neil Lennon’s Hibs, walloped 4-2 in the east end of Glasgow in October, will provide the opposition at Easter Road three days later before the visit of tonight’s opponents to Parkhead in a fortnight.

Three days later, Dundee are in town, then it’s an intriguing Boxing Day encounter against Aberdeen at Pittodrie while the curtain will come down on the league fixtures for 2018 with a game at Ibrox on Saturday, December 29.

While Celtic were celebrating winning the Betfred League Cup following their 1-0 triumph over Aberdeen at Hampden on Sunday, Steven Gerrard’s Govan outfit took advantage to beat Hearts 2-1 and go a point ahead at the top.

The title kings have a game in hand and will make sure it counts before the winter break.