TOM ROGIC is standing by for only his second start of 2019 when Celtic take on Hibs at Easter Road tomorrow afternoon.

The stylish Australian World Cup midfielder had been sidelined since the 4-3 triumph over Aberdeen at Pittodrie on Boxing Day with a knee injury sustained on international duty with his country.

Rogic made his first appearance since the turn of the year as a second-half substitute for Olivier Ntcham in the 2-1 victory over Steven Gerrard’s Ibrox side at Parkhead just under three weeks ago, but sat out the 2-0 win at St Mirren before getting the nod to begin in the goalless stalemate against Livingston.

Last week, the 25-year-old playmaker gave way to Ryan Christie in the line-up to face Aberdeen in the Scottish Cup semi-final, but was called into action after the unfortunate Highlander was stretchered off following the sickening facial blow that brought his season to a shuddering halt.

And, only moments later, the Wizard of Oz swept in the third goal to add to the strikes from James Forrest and Odsonne Edouard to ease the holders to a Scottish Cup Final showpiece showdown against Hearts at Hampden on May 25.

BY THE LEFT…Tom Rogic scores No.3 against Aberdeen last week.

Rogic, who has played major roles in campaigns in the last two run-ins, looks a likely replacement for Christie against the Edinburgh outfit, but French ace Ntcham will also be in contention. 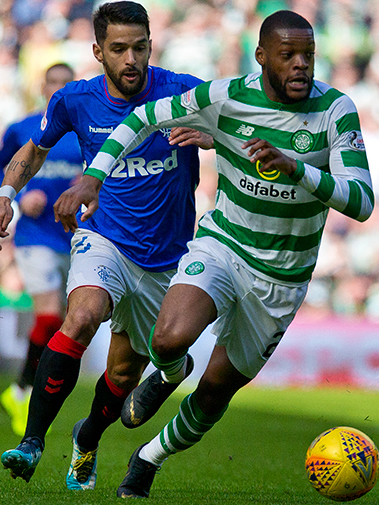 IN THE RUNNING…Olivier Ntcham is an option for Neil Lennon.

The interim Hoops manager, however, is on the hunt for the mole who has been leaking team selections on social media. Speaking to BBC Scotland, he said: “I am aware the team does get leaked and I’m really not happy about it.

“Someone is letting us down. I’m not convinced it’s coming from a player.”

Asked why he should not simply delay his selection announcement, Lennon answered: “I’d like to, but it’s what the players have been used to, so, again, I’m not wanting to change too much too soon.”

CQN has refused to make public the manager’s selected line-ups until they have been confirmed. The good of Celtic Football Club and the continued success of the team are of paramount importance to this site and our readers.

We do not require clicks while allowing the opposition the opportunity to plan ahead to suit a leaked formation, for instance, Jonny Hayes playing instead of Scott Sinclair at the start against Aberdeen last Sunday.

CQN got wind of the likelihood well before the kick-off, but decided it would not enhance the team’s chances of reaching the Scottish Cup Final next month. We publicised the eleven and the substitutes once Lennon was ready for his choice to be known.

We wish the Hoops gaffer well in his pursuit of the sneak who clearly does not have Celtic’s best interests at heart.