TOM ROGIC appears to be no closer to finding a new club almost SEVEN weeks after leaving Celtic.

The 29-year-old playmaker’s situation is beginning to concern Australian football fans as their nation gets ready to play in the World Cup Finals in Qatar, the competition kicking off on November 21 with the silverware showdown on December 18.

Rogic left the Hoops after over nine and a half years’ service, 46 goals in 273 appearances and 16 trophies and made his final appearance in the 6-0 win over Motherwell in the east end of Glasgow on May 14.

PICK IT OUT…Tom Rogic slams in one of his double past the helpless Liam Kelly in Celtic’s 4-0 win over Motherwell at Fir Park in February.

Socceroos followers anticipated the stylish performer being snapped up by another European club and they find it puzzling that he has not yet found another team, although he did turn down a lucrative offer from Indonesian champions Persija Jakarta, as CQN reported at the weekend.

Multiple A-League clubs are reportedly interested in bringing him back Down Under.

With the global extravaganza in the Middle East less than five months away, his next move is seen as crucial to the Aussies’ hopes.

Rogic missed the play-off encounters against the United Arab Emirates and Peru for “personal reasons”, but is still seen as a key man in the country’s first-choice line-up.

He has claimed 10 goals in 53 international appearances to become a firm favourite with the Oz supporters. 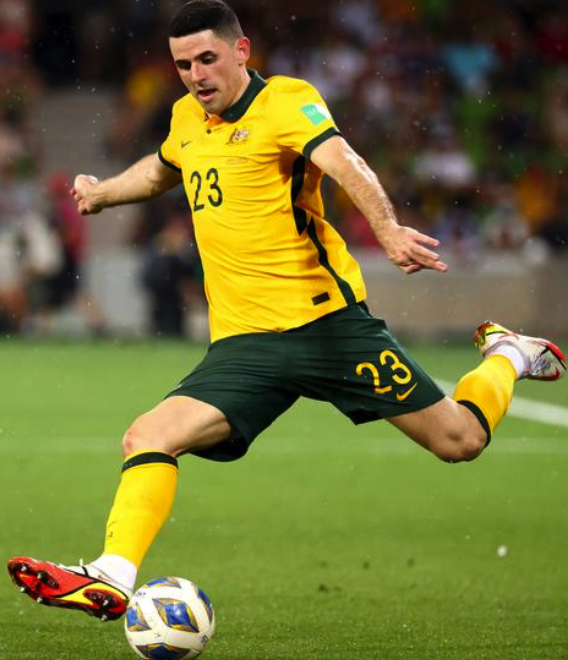 WIZARD OF OZ…Tom Rogic prepares to launch a cross into the danger zone.

Meanwhile, his international team-mate Martin Boyle could also be on the look-out for a new club after Al-Faisaly were relegated from Saudi Arabia’s elite division.

The 29-year-old winger quit Hibs at the turn of the year after agreeing a big-money countract with the Middle East club, but scored only three goals in 13 appearances as the team lost its top-flight status earlier this week when they crashed 2-1 to champions Al Hilal in the final game.

The demoted side may now look at trimming their staff and the Aberdeen-born forward is one of their highest earners, according to Fox Sport.

HAMPDEN HOORAYS…Martin Boyle celebrates the first of his hat-trick in Hibs’ 3-1 Premier Sports League Cup semi-final triumph over the Ibrox side last season.

The Easter Road club, where he scored 14 goals in 28 appearances in the first half of the term, reportedly have a buyback clause in his contract.

Neil Lennon worked with the former Montrose and Dundee raider during his stint in Edinburgh and the pacy wide man, who thumped in a first-half hat-trick in his team’s 3-1 win over the Ibrox club in the Premier Sports League Cup semi-final in November, was linked with a switch to the east end of Glasgow on a few occasions.

The livewire raider was kept quiet in the dramatic Hampden confrontation a month later as Kyogo Furuhashi claimed a second-half double in the 2-1 victory to present Ange Postecoglou with his first trophy as Celtic manager.