Celtic Quick News on News Now
You are at:Home»Football Matters»ROGIC’S MOVING MOMENT
By CQN Magazine on 18th April 2016 Football Matters
THE earth moved for Tom Rogic at Hampden – and cost Celtic the chance of a place in the Scottish Cup Final.
Ibrox players celebrated their 5-4 shoot-out success as the Aussie midfielder hammered the decisive penalty-kick over the crossbar.
However, remarkable BBC film has shown the Hampden turf on the spot actually ROSE at the precise moment he was about to make contact with the ball.
Former Scotland striker Steven Thompson, working as a match summariser, said: “This is an incredible piece of footage.
“Just watch his standing foot just before he kicks the ball. 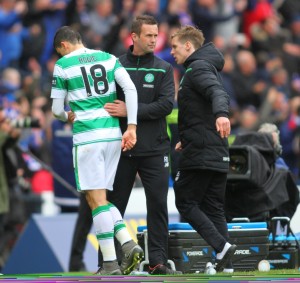 “A whole piece of turf moves and lifts the ball an inch off the ground.
“I think the penalty he was hitting was going high, anyway – possibly into the top corner area – but the ball just sat up an extra inch.
“It was almost like a golfer on the tee.”
Co-analyst Pat Bonner, the ex-Hoops goalkeeping hero, said: “Why did it have to happen to a Celtic player?”
Rogic, who scored the Parkhead side’s second equaliser after coming on as a substitute, was one of three Hoops players to miss from the spot.
The others were Callum McGregor who clattered his wayward effort off the face of the crossbar and skipper Scott Brown who saw his dreadful effort saved by Wes Foderingham.
If you can bear it you can watch the penalty shoot out HERE.