ROSENBORG have been hit by a blow as they get ready for the Europa League encounter against Celtic in Trondheim a week tonight.

Star striker Nicklas Bendtner looks set to miss the crucial tie as he prepares to start at 50-day jail sentence.

The former Arsenal and Juventus ace has dropped his appeal against an assault conviction after being found guilty of beating and kicking a taxi driver while in Copenhagen.

The Norwegian club refused to dump the 30-year-old frontman who still has a year to run on his current deal.

Brendan Rodgers’ men go into the game in pursuit of three vital points as they hope to keep the pressure on Group B leaders RB Salzburg, who are top with 12 points, and RB Leipzig, who have six along with the Hoops.

Leigh Griffiths was the solitary marksman as the Hoops won 1-0 over the Norwegians in the section in September, a game Bendtner missed through injury. 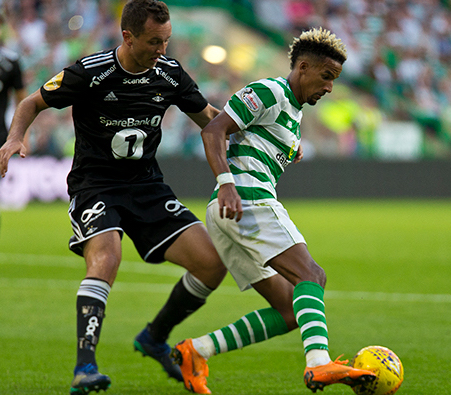 ON THE BALL…Scott Sinclair displays his skills in the 1-0 win over Rosenborg in Glasgow.

Earlier in the Champions League qualifiers this season, Rodgers saw his team win 3-1 at Parkhead and they battled out a scoreless stalemate in Norway the second leg.

The 81 times-capped Danish international was arrested in September after being reported for the attack which left the cabbie with a broken jaw.

In surveillance video of the incident, Bendtner appears to strike the driver in the face and kick him after a row started over the route the taxi should have taken.

Bendtner admitted to hitting the driver in the face, but said it was because he felt threatened when the driver threw a bottle or a can towards him and his girlfriend when they left without paying.

Lawyer Anders Nemeth confirmed the appeal had been dropped and added: “Nicklas does not agree with the decision of the City Court, but has decided to put the case behind and focus on his club and family.”

Bendtner has also been ordered to pay the cabbie more than £1,000 in compensation.