Celtic Quick News on News Now
You are at:Home»Latest News»‘ROSENBORG WILL BE A GOOD TEST,’ CALMAC
By CQN Magazine on 18th September 2018 Latest News

CALLUM McGREGOR insists Celtic will have to be up to speed if they hope to achieve the hat-trick against Rosenborg.

The Hoops take on the Norwegian champions in the opening Europa League Group B encounter at Parkhead on Thursday night.

And the Scotland international midfielder has played his part in dismissing this week’s foes twice in the Champions League qualifiers over the last two campaigns.

However, Brendan Rodgers’ men face more of a threat this time around with Rosenborg finding better form since they went out of the top-flight competition six weeks ago, losing 3-1 in Glasgow and drawing 0-0 in Trondheim.

In July, there was turmoil at the club following the sacking of manager Kare Ingebrigtsen, but Dutch coach Rini Coolen has taken over and steadied the ship. The club have now won nine and drawn one of their last 10 games. 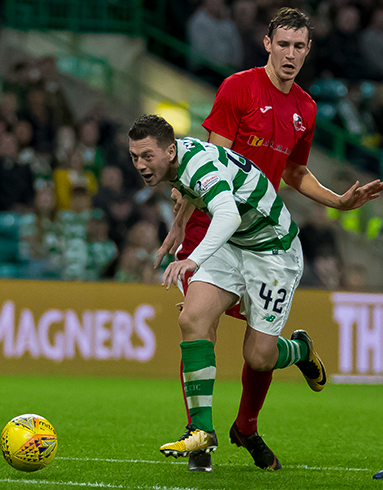 McGregor said: “I think the fact that we’ve eliminated them twice in the last two seasons gives us a psychological advantage. When you’ve played well and beaten opponents before then it gives you the belief that you can get more results against them.

“We know that we can beat Rosenborg, so it’s up to us to turn up with the right attitude on the night. The first game being at home is another bonus for us – the crowd will be behind us and, if we can take the three points, then it’ll help us push on as we look to get out of the group.

“It’s a tough section. When you look at the rest of the competition, most of them are like that. You think of the Champions League as being a level above, but when you see some of the teams who are in this tournament then there’s no shortage of quality.

“The standard is high, but we’re looking to do something this season and this will be a good test for us.”