RAMPANT Ryan Christie shot to the top of the Celtic scoring charts with a devastating double as the champions completed a perfect 10 successive wins in a romp against Ross County in Dingwall this afternoon.

The Inverness-born smooth operator enjoyed his own Highland fling with a first-half twosome to pilot the way to three more crucial Premiership points.

Tom Rogic added a third before substitute Mikey Johnston, on the field for less than a minute, angled in a fourth as the Hoops made certain after a slight stumble.

The Hoops allowed the home outfit back into the contest after Christie had netted his 14th goal of the campaign to put him level with Odsonne Edouard who was sitting this one out.

The elegant playmaker snapped up the opening goal in the 11th minute, but only after he had seen a penalty-kick well saved by Nathan Baxter. The on-loan Chelsea keeper couldn’t hold the ball, though, and the former Caley Thistle star latched onto the rebound to fire it into the inviting net.

Referee Nick Walsh had awarded the spot-kick following a clumsy kick from Keith Watson on Lewis Morgan that sent the forward crashing in the box. 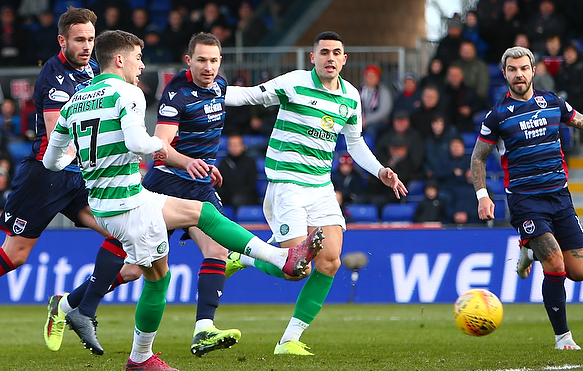 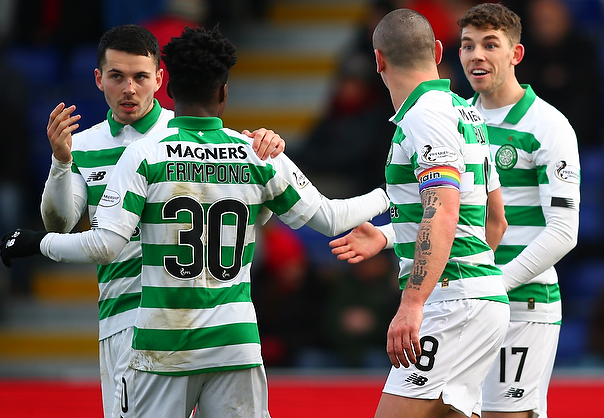 CHRISTIE AT THE DOUBLE…marksman Ryan looks delighted after making it 2-0 with team-mates Lewis Morgan, Jeremie Frimpong and Scott Brown joining in. 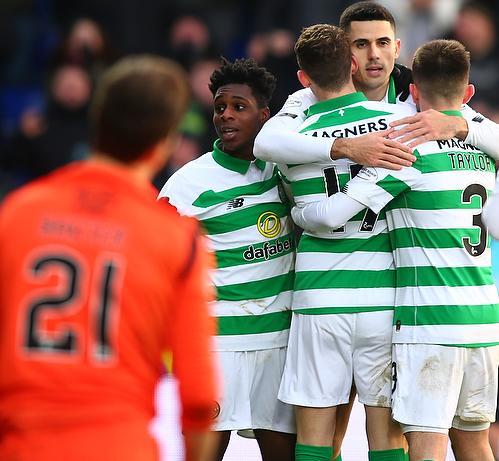 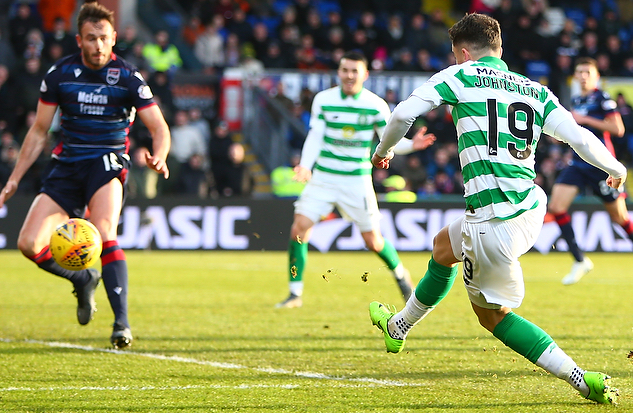 NUMBER FOUR…Mikey Johnston wastes no time in making an impression as he sweeps in the killer strike.

The match official got it right on that occasion, but he blundered twice in a matter of moments to allow County the opportunity to get back into the game.

In the 24th minute, Jeremie Frimpong was involved in a tangle of legs with Ross Stewart as they both chased the ball on the left wing. It was purely accidental as both players tumbled to the ground. Walsh thought it was a foul by the Dutch teenager and compounded the error by booking the defender.

Frimpong looked amazed by the decision, but not as amazed as his team-mates when they failed miserably to clear the resultant free-kick that sailed into the heart of their defence. It begged for either Christopher Jullien or his skyscraper partner Kristoffer Ajer to attack it. Fraser Forster decided against coming into traffic to allow his defence to cope with the obvious threat.

Frustratingly, it swirled to Stewart who made space for himself with a blatant push in the back of Rogic. With the Aussie taken care of, the County attacker got a clear sight of goal and he nodded beyond the static keeper.

Walsh and his assistant, incredibly, missed the foul on Rogic and awarded the goal. In truth, the Hoops defenders should have dealt with the danger.

However, the advantage was restored in the 39th minute when Christie collected his 15th strike of the campaign and he stamped the moment with a fair bit of nonchalance.

Ajer was allowed to romp out of defence before slotting a ball into the path of his team-mate who timed his run to perfection as the opponents attempted to play offside.

Watson played him on and Christie carried on before almost casually stroking the ball left-footed beyond the advancing Baxter. 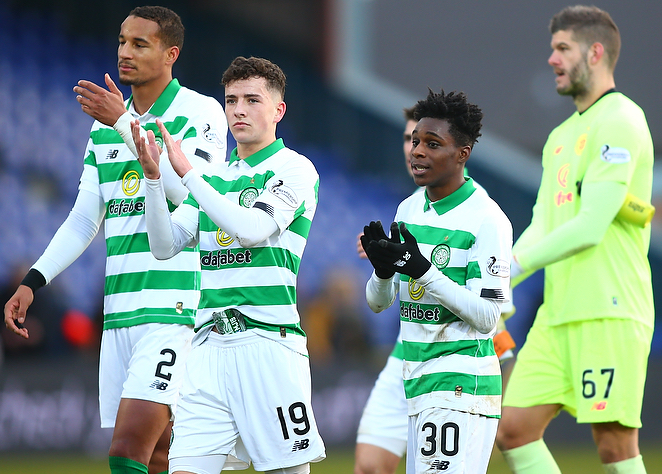 As early as the sixth minute, Christie had posted his intention when he hit Baxter’s left upright with a wicked right-wing angled free-kick that completely flummoxed the custodian before bouncing wide.

Callum McGregor suffered identical misfortune in the 58th minute after a superb move he instigated with a ball to Rogic that was touched on by James Forrest into the path of his fellow Scotland international.

The midfielder hit a sweet left-foot effort from 18 yards that left Baxter clawing fresh air, but the ball cannoned off the foot of the left-hand post and rebounded to safety.

However, Rogic did the trick in the 67th minute when Morgan displayed electrifying pace to get away from two defenders on the left. His low ball was touched by Greg Taylor to Forrest who set up the Aussie ace and he made no mistake with a low left-foot drive from 12 yards.

It was all over when Johnston, who was just on for Rogic, netted a sublime fourth in the 72nd minute when he raced away from two defenders onto an excelent pass from Taylor and simply passed the ball into the far corner of the net with the keeper again left helpless.

Leigh Griffiths and Nir Bitton came on for Morgan and McGregor near the end as Celtic slipped into cruise control.

A similar outcome a week today would be acceptable.