The champions have been on the brink of the inevitable honour since football went into lockdown in mid-March due to the coronavirus pandemic.

Neil Lennon’s men were zeroing in on the club’s 51st flag in their history as they sat on top of the table with a 13-point advantage with only eight games to play. Plus they held a superior goal difference of plus 25 on their nearest challengers.

Goodwin saw his Paisley outfit trounced 5-0 at Parkhead – with Leigh Griffiths claiming a superb hat-trick – in the last game before the premature closer and the Saints gaffer reckons they are worthy winners of this campaign’s crown.

Speaking on talkSPORT, the Irishman said: “Rangers still believe, although they are 13 points behind, they have got a chance of catching Celtic and stopping the nine in a row.

“But from my own point of view, common sense tells me that our league isn’t going to be able to start, I expect a decision to be made towards the end of this month and for the league to be concluded. 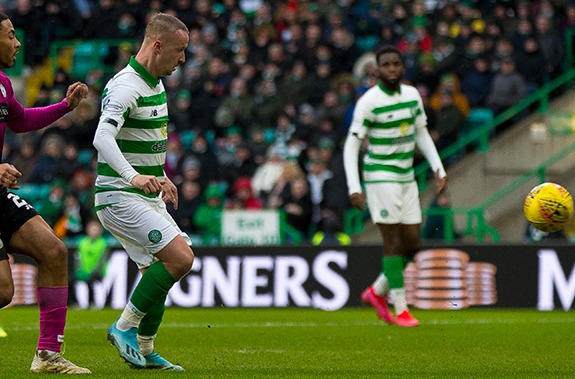 SAINTS AND WINNERS…Leigh Griffiths scores the first of his hat-trick in the 5-0 win over St Mirren in March.

“If you were to go on the current form, and the way those two teams at the top are playing out, then I don’t think anyone could deny Celtic are in a far better place than Rangers were. Since the start of the year, Rangers have dropped something like 11 points more than Celtic, so Celtic are deservedly out in front, they have been the better team this season.

“You can flip that on its head and look at the teams down near the bottom. Hearts have only won four games all season. We’ve got eight games left up here, Hearts would probably have had to win another four, possibly five games out of those eight.

“Of course it could have happened, none of us have a crystal ball, but it’s highly unlikely that Rangers were going to catch Celtic and Hearts were going to have to have a hell of a turnaround in their current form to catch the teams above them.

“People might say it’s easy for me to say because we’re sitting ninth and are safe and none of it really involves us, but I have to take a common sense approach to it.”

Goodwin added: “We’d all love to get back playing and would all love to finish the season in the correct manner, but I don’t think that’s possible. Quite simply, we don’t have the resources available to us to purchase these testing kits.

“There’s talk of each kit costing £150 and players need to get a couple of tests prior to each game, the resources in Scotland are nowhere in comparison to what the English clubs in the Premier League have to deal with.