THE first finals for 23 years – and, alas, the same old Scotland story.

The last time the Scots played in a major tournament was the World Cup in France in 1998 when they bowed with a humiliating 3-0 hammering from Morocco.

This afternoon at Hampden, there was that same old familiar sinking feeling as Czech Republic triumphed in front of 12,000 fans.

“We could have been braver on the ball at times,” conceded disappointed boss Steve Clarke, sentiments which were echoed by his captain Andy Robertson.

Mistakes were made, blunders were punished and just about everyone in the squad accepted they had not been clinical enough against opponents who were courageous in defence as they threw themselves in front of efforts from the home side.

HELPLESS…David Marshall can’t prevent Patrik Schick’s header from zipping past him for the first goal.

There was bad luck, too, when a shot from Jack Hendry cannoned off the crossbar with impressive keeper Thomas Vaclik struggling.

And the Czechs also possessed a clever and deadly striker in Patrik Schick who netted just before half-time with a superb headed goal and produced a brilliant second seven minutes after the turnaround.

Scotland are already struggling in Group D and they know how important Friday’s visit to Wembley will be if they can claw back the points dropped in Glasgow. They are also due to face Croatia at the national stadium a week tomorrow, but they could already be out of the Euros by the time that kick-off arrives.

Gaffer Clarke decided to go with one Celtic player – Ryan Christie – in his starting line-up, but Callum McGregor and James Forrest were sent on after the hour mark with the game slipping away. 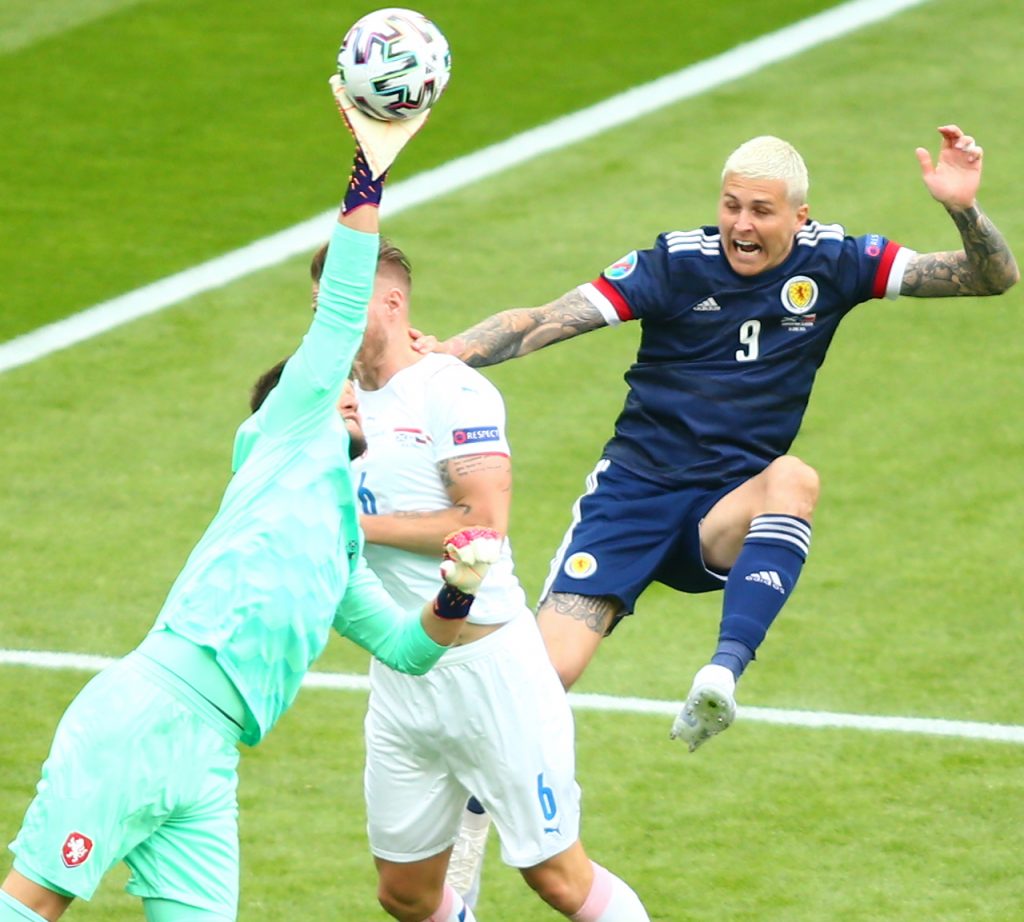 JUST IN TIME…keeper Thomas Vaclik claws the ball away from striker Lyndon Dykes.

The visitors were first to threaten when Schick forced a superb reaction save from David Marshall low down at his right post.

However, skipper Robertson had a fabulous opportunity to open the scoring in the 32nd minute when he was sent charging into the box following a cute pass from Christie. The left-back could have taken a touch, but elected for a first-time shot that lacked accuracy.

It was just above the netminder when a shot either side may have brought better dividends. Vaclik reacted swiftly to throw a hand into the air to get a vital deflection as the ball flew over the crossbar.

In the 42nd minute, the Scots conceded following three corner-kicks in quick succession. Something had to give and it did when the defence failed to do their job at the second ball and dangerman Schick rose with perfect timing to glance a right-wing cross away from the sprawling Marshall.

Christie was replaced at half-time with Southampton striker Che Adams coming on to partner Lyndon Dykes up front.

Two saves from Marshall prevented the Czechs from snatching an early goal in the second period before Hendry had a first-time shot in the 48th minute that was deflected onto the crossbar and over. 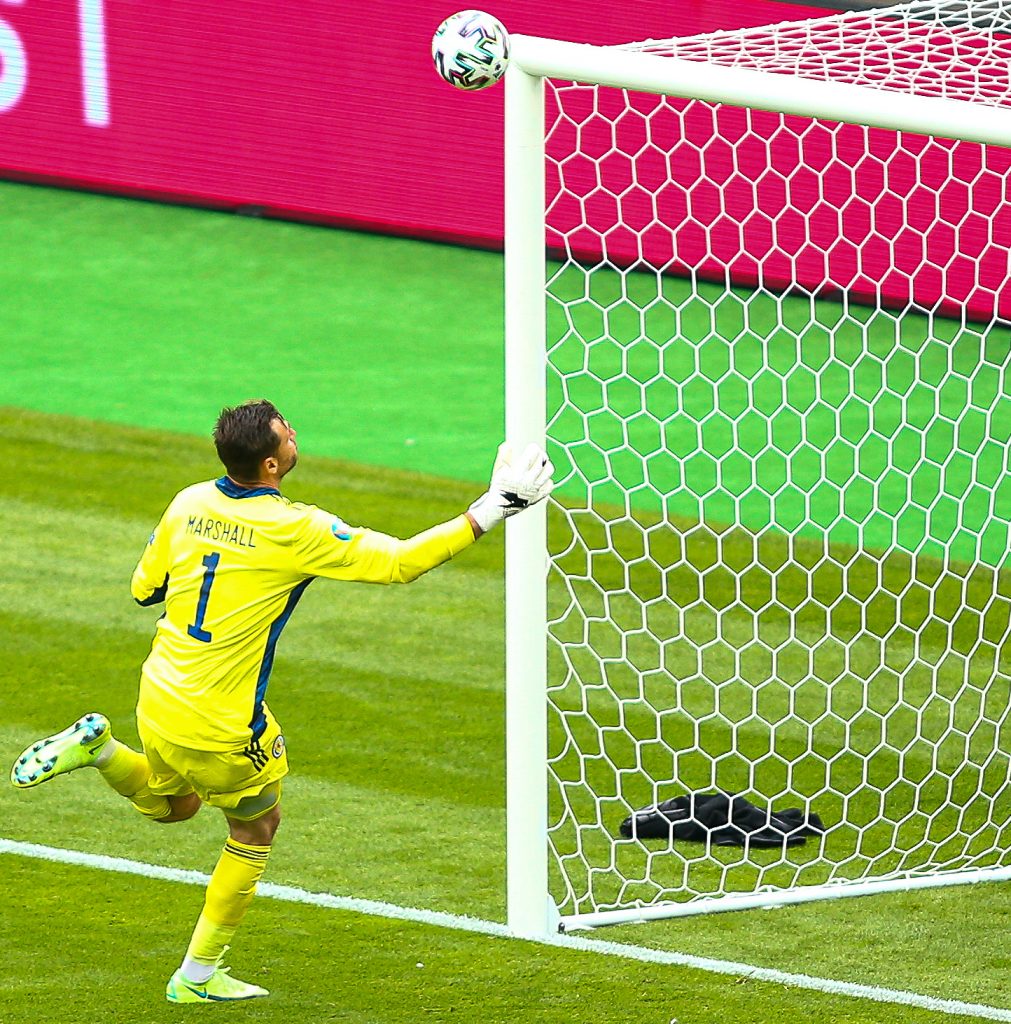 UP IN THE AIR…David Marshall chases Schick’s long-range effort for the second goal. 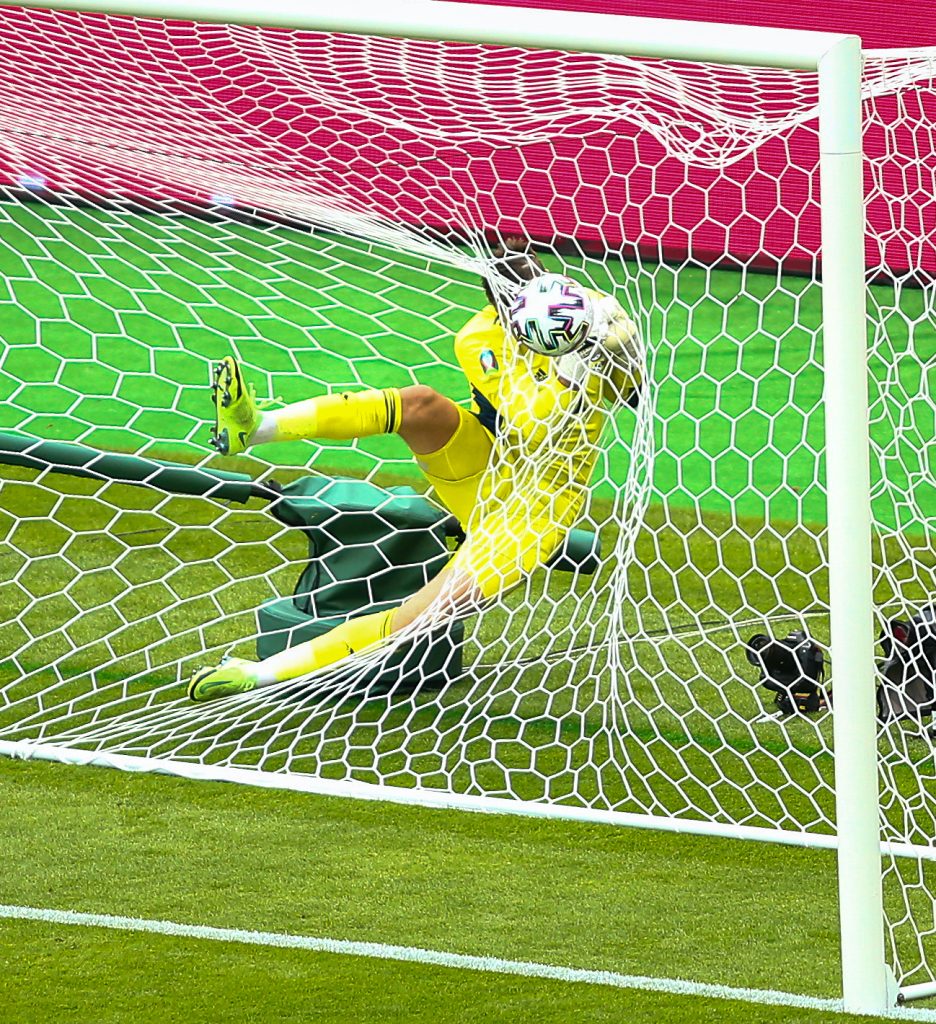 IN THE NET…the Scotland keeper gets tangled up in his vain attempt to prevent the Czechs’ second goal.

Moments later, Vaclik produced a stunning athletic save to claw away a miscued clearance from a team-mate as Dykes challenged.

The reactions of the shotstopper proved crucial when the Czechs claimed a wonderful improvised second goal in the 52nd minute.

Hendry blundered when he attempted a long-range drive at goal when it would been more profitable to play in a team-mate. The Scots paid a heavy price for the centre-back’s rush of blood to the head.

The ball rebounded to Schick and he sent a cunning lob from 45 yards over the stranded Marshall. The former Celtic keeper raced back towards his line, but the ball arced and dipped into the exposed goal.

Scotland tried to come back and Stuart Armstrong, another one-time Hoops player on view, had a shot deflected onto the roof of the net and Dykes failed to take advantage smack in front of goal when the keeper scrambled his effort to safety. 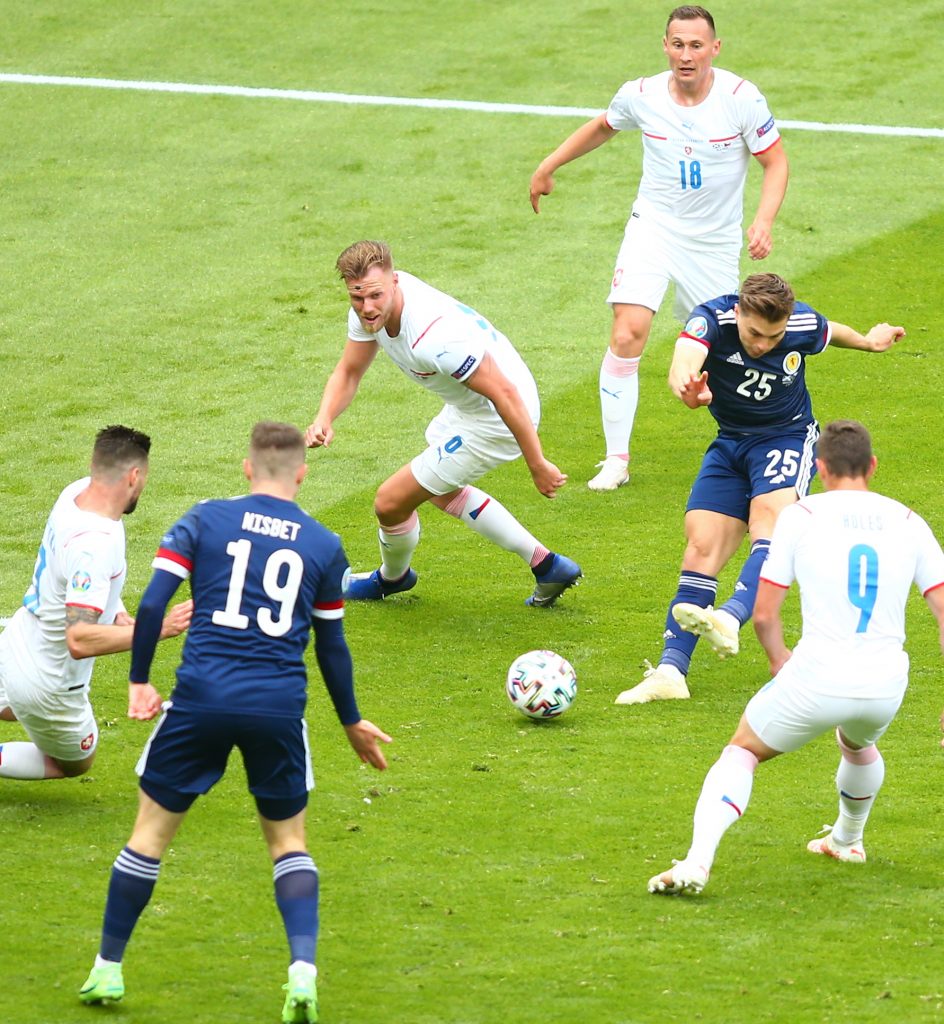 OUT OF LUCK…James Forrest fires in a strong left-foot shot that is about to be deflected over the bar by a Czech defender.

After that, the nearest Clarke’s side came to a goal came in the fading moments when Forrest, who had replaced Stephen O’Donnell in the 79 minute, displayed some remarkable trickery to get away from two defenders as he came in from the right, but the Hoops star’s left-foot shot was kocked high and wide.

Now all eyes are on Gareth Southgate’s England at Wembley on Friday. Mission Impossible again for a Scotland side? We can only hope they overcome the fear factor and give themselves a chance.