A stoppage-time penalty-kick from Krzysztof Piatek – following a theatrical dive from the striker – gave the Poles a draw, but the main result of the evening was in Cardiff where two goals from Gareth Bale gave Wales a 2-1 win over Austria.

The victory means Steve Clarke’s Scots could face a World Cup Play-Off Final against the Welsh away from home – if, of course, they overcome Ukraine in their delayed semi which is now rescheduled for June.

In Glasgow, a crowd of around the 38,000 mark watched Tierney put the home side ahead in the 68th minute – and no-one could begrudge the home side their breakthrough effort. 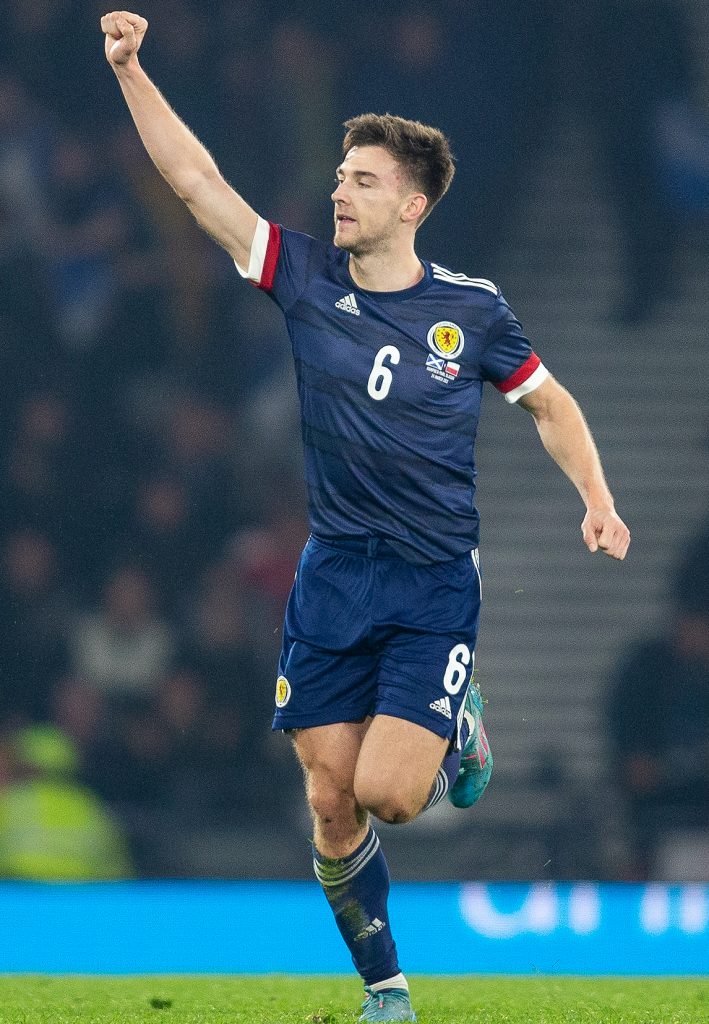 HEADMASTER…Kieran Tierney takes the applause after scoring his first goal for Scotland against Poland in the friendly encounter at Hampden.

John McGinn flighted in an inviting free-kick from the right and Tierney sneaked in behind the defence to meet the ball perfectly with his head from six yards to guide an attempt behind the helpless Luksasz Skorubski.

However, any hope of a morale-boosting triumph was torpedoed in the third minute of added-on time when the referee adjudged Craig Gordon had pulled down Piatek.

It looked a clear dive from the Pole and, to make matters worse, he took the award and struck a shot down the middle of the goal as the keeper took off for his right. So, it was honours even at the end of the night, but no doubt the Scots will feel hard done by.

There was no way through for Clarke’s men in the opening 45 minutes with keeper Skorubski defying them time and again.

Everton defender Nathan Patterson had three shots on target and was foiled on each occasion by the agile Polish last line of defence.

Skorubski’s best moment came just before the interval when he made two superb quickfire saves to frustrate Clarke’s side. 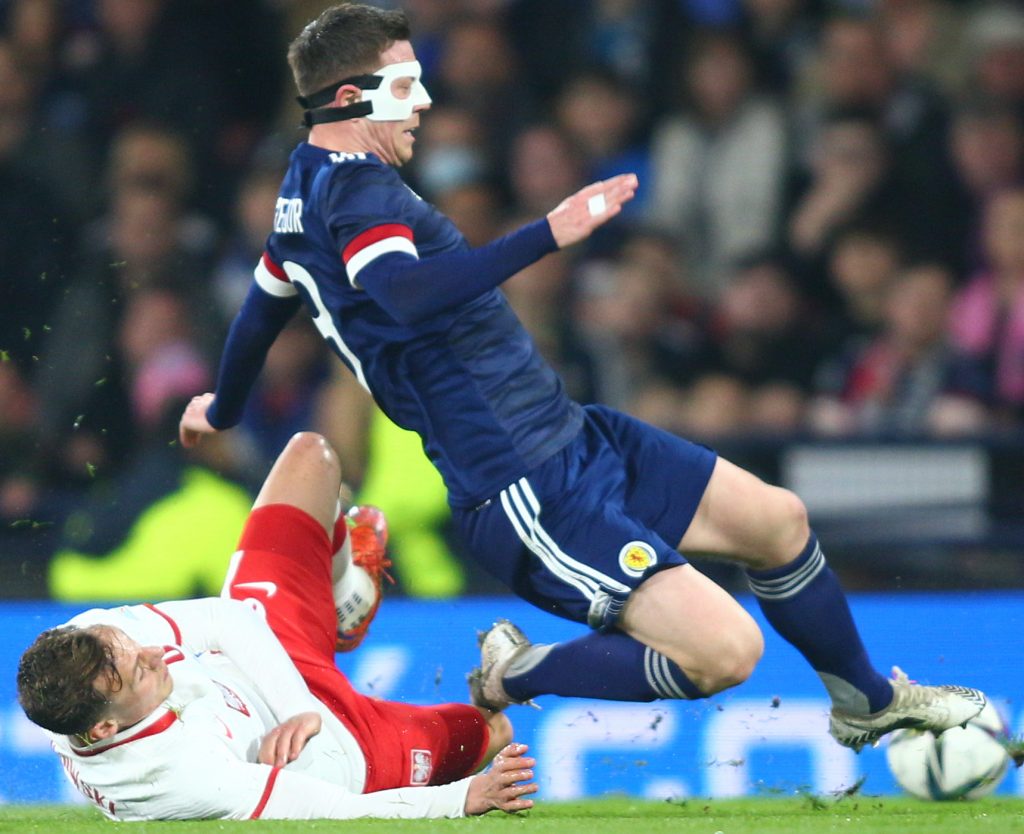 CRASH-LANDING…Callum McGregor is heading for a fall after a challenge from a Polish defender.

He was quick to react when Patterson had his third go at goal with a powerful right-foot effort the netminder beat away with both hands. The ball fell to Billy Gilmour who first-timed a rasping low drive towards the net.

The Polish No.1, though, was equal to the task yet again and threw himself to his right to push the effort away.

Earlier in the game, he had produced a reasonable stop to deny Patterson who raced 40 yards past four opponents before firing in a left-foot drive, but the keeper got down to smother the attempt.

In the 19th minute, skipper McGinn cut in from the right to present a shooting opportunity for Celtic captain Callum McGregor, but, unfortunately, his left-foot shot from just outside the box was too high. Ryan Christie did likewise shortly afterwards.

Che Adams, working hard in the lone striker’s role as usual, tried his luck from 30 yards after McGinn had set him free, but once again it was that man Skorubski to the rescue for the visitors. 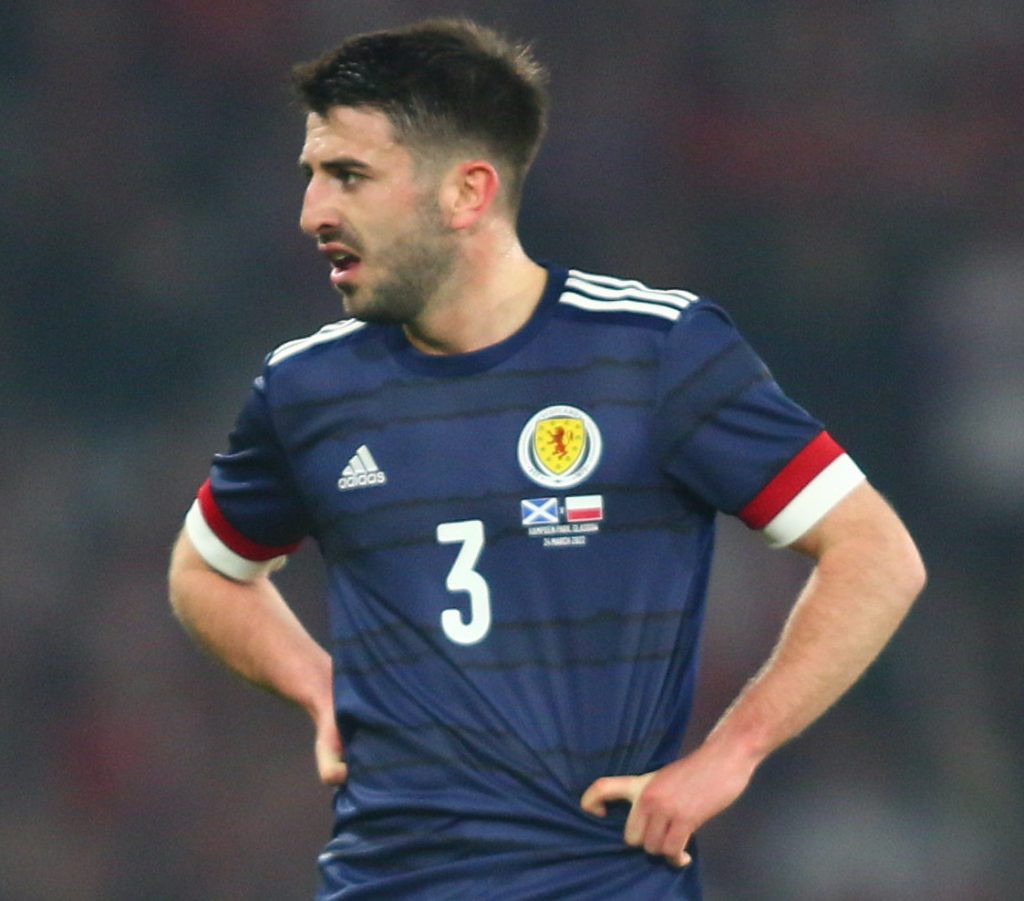 ON THE LOOK-OUT…Greg Taylor takes a breather during the action against the Poles.

There was a scare for the Scots in the 23rd minute when Bartosz Salamon headed over the bar from inside the six yards box. He really should have planted the ball behind a stranded Gordon.

In the 65th minute, Gilmour staged a remarkable rescue-act when he acrobatically managed to divert a shot from Piatek off the line after the Polish striker had reacted quickly after a slip from Scott McTominay on the halfway line.

He was sent clear and raced into the box on the left, turned inside Grant Hanley and walloped a shot beyond Gordon. It looked a goal all the way until the on-loan Norwich City midfielder materialised to boot it to safety.

Tierney had his memorable moment in the 68th minute when he netted a rare goal and and nine minutes after that, Clarke made three more changes as he withdrew McGregor, Christie and Gilmour to send on Ryan Jack, Stuart Armstrong and Kenny McLean.

And Stoke City striker Jacob Brown became his sixth change of the evening when he replaced Adams in the 90th minute.

Then came the late, late show for the Poles to snatch a leveller.

Now the Scots can prepare for a friendly against Austria in Vienna on Tuesday and manager Clarke will be satisfied so many of his squad got a good run-out on this occasion.