CELTIC’S Callum McGregor, James Forrest and Ryan Christie were pitched into the unknown tonight – a loss at Hampden.

The Hoops trio have been involved in the Parkhead side’s treble treble campaigns that has brought in nine successive domestic honours – and wins in Cup semis and finals at the national stadium along the way.

But it was a different story on the international front as Scotland toppled to a home defeat against a hard-working Russian side who gifted Steve Clarke’s men a goal of a start and then came back to earn three crucial points.

The defeat leaves Scotland’s chances of qualifying from Group I in tatters although there is always the play-off route open to them.

The home side made an enterprising start and forced three corner-kicks inside the first nine minutes before opening the scoring in the 10th through John McGinn who claimed his first strike for his country.

WHAT A STUNNER…John McGinn is on the six-yard line as he blasts in the opening goal.

And it is highly unlikely the Aston Villa midfielder will ever claim an easier goal in his career.

After a quick throw-in and some sharp inter-passing on the left, Ryan Fraser was given the opportunity to sling in a cross to the danger area.

Oli McBurnie tried to put the pressure on at the near post and keeper Guilherme hesitated for a fatal moment and failed to grasp the ball as it arrived in the box.

The ball broke from the blundering goalie straight to McGinn and he didn’t waste a moment as he thumped a low left-foot drive from six yards into the unprotected net. 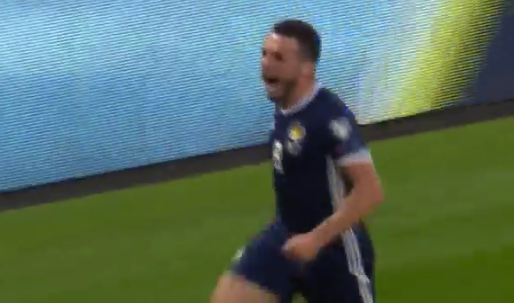 YIPPEE…John McGinn races away in delight after scoring his first Scotland goal.

No-one could begrudge the Scots their early lead against dangerous opponents who rallied swiftly and keeper David Marshall had to react swiftly to turn a bullet-like header from skipper and 6ft 5in attacker Artem Dzyuba over the crossbar.

Callum McGregor was busy in the middle of the park alongside Scott McTominay and marksman McGinn, but James Forrest was being asked to carry out too any defensive duties on the right wing and was rarely seen as a menace going forward.

The Russians were coming more and more into the contest and McBurnie was an isolated figure up front as he foraged for scraps.

The leveller that had been threatening duly arrived in the 40th minute and it was snapped up by the prolific Dzyuba after an unfortunate ricochet off Scots skipper Andy Robertson.

The ball fell kindly to the giant frontman and he drilled a 14-yard drive low past Marshall at his left.

And the visitors were celebrating again in the 59th minute when they took the lead with a neat build-up down the left that saw Golovin get in a cross while challenged too late by debutant Liam Cooper. The unfortunate Stephen O’Donnell got the final touch as the ball sped across the goal to Zherkov at the back post and went in off the Kilmarnock defender’s boot. 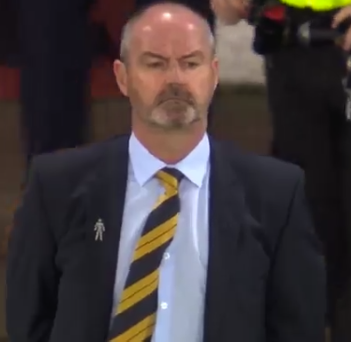 Clarke responded shortly afterwards by sending on Christie and Kenny McLean for McGinn and Forrest and Matt Phillips joined in later when he took over from McTominay.

In the 64th minute. Brazilian-born right-back Mario Fernandez came close to a third with a flashing header, but Marshall produced a superb diving save to touch the ball onto the crossbar and over.

Moments later, he was left helpless as a drive clipped the outside of his left-hand post.

Christie looked lively when he came on and tested the keeper with an 18-yard drive as the Scots tried desperately to get back into the game.

However, it was not to be as Clarke suffered his second successive defeat in the Euro 2020 qualifying campaign.

It might not get any better when Belgium visit on Monday.