SCOTT McTOMINAY scored his first goal for the Scots in the fourth minute of stoppage time in a rollicking, rousing World Cup qualifier against Israel at rainswept Hampden this evening.

And the Manchester United star got his timing absolutely spot on as Steve Clarke’s men moved four points ahead of their visitors and edged closer to a play-off place for Qatar 2022.

With a sell-out national stadium in a frenzy and the score tied at 2-2, John McGinn swung over a corner-kick from the right, Jack Henry nodded it on and McTominay materialised at the back post to force the winning goal beyond the gallant Ofir Marciano.

In the seventh minute of added-on time, Polish referee Szynom Marcimiak blew to finally bring an epic encounter to a halt.

LAST POST…Scott McTominay pops up to knock the winner beyond Ofir Marciano.

PICK IT OUT…the israel keeper is helpless as the ball soars towards the net. 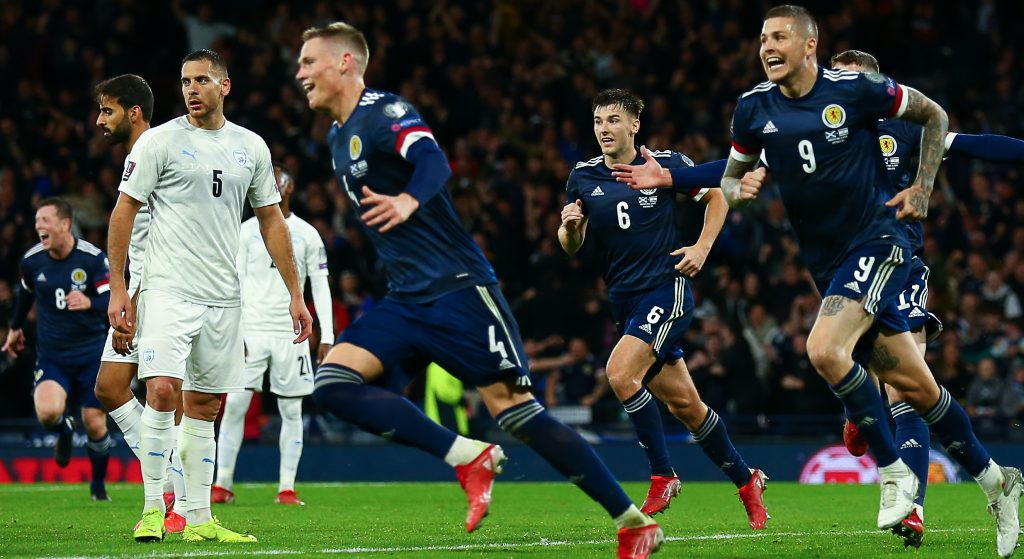 HAPPY DAZE…Scott McTominay runs away in delight with Callum McGregor (left), Kieran Tierney and Lyndon Dykes about to join the celebrations.

Scotland had fought back twice, squandered a penalty-kick just before the interval and then simply refused to settle for a point as they drove at opponents who were always dangerous on the break.

Callum McGregor played with calm authority in the centre of midfield and allowed Billy Gilmour and McGinn freedom to go forward at every opportunity.

However, the home side had to battle all the way to emerge victorious on this frantic occasion.

After only five minutes, Craig Gordon had to retrieve the ball from the back of his net after a 25-yard free-kick from Eran Zahavi had escaped his right hand  high to his right.

The Scots were stung into retaliation and they got their reward in the 29th minute with a memorable equaliser from McGinn. 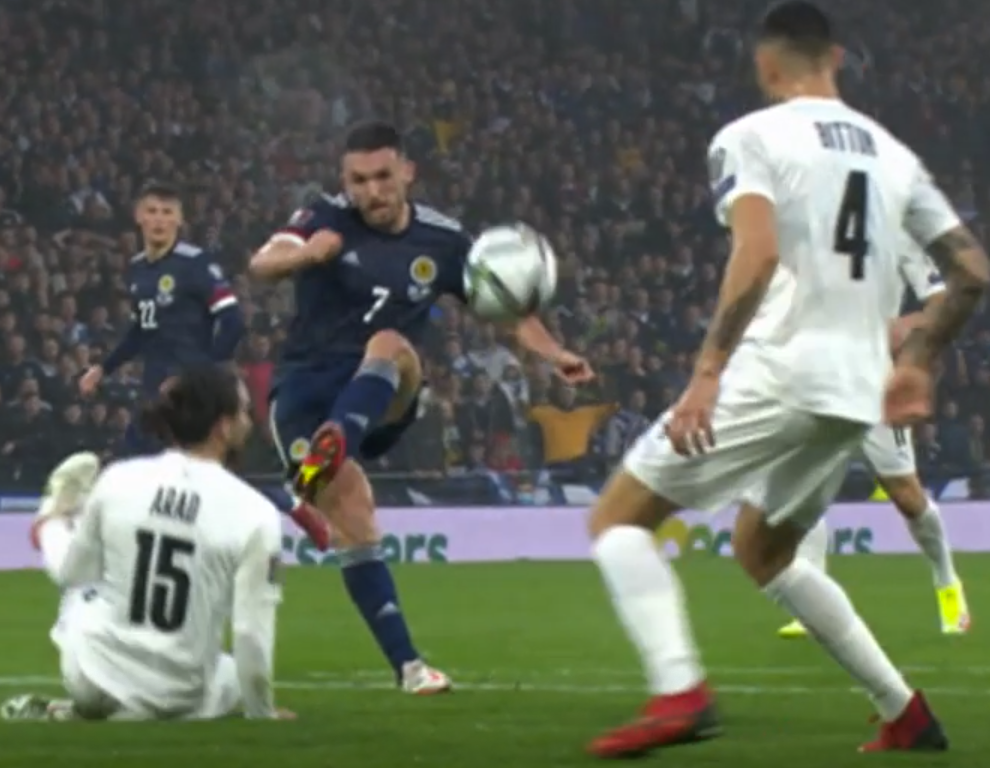 BY THE LEFT…John McGinn curls in Scotland’s first goal.

Gilmour, Kieran Tierney, Andy Robertson and Che Adams were all invoved in a sweeping move on the left and the skipper rolled the ball in front of the Aston Villa terrier.

He didn’t hesitate as he made a superb connection with his left foot from the edge of the box to arc an unstoppable effort high past his former Hibs team-mate Marciano at his right.

Two minutes later, the Israelis were ahead again following some woeful defending in the home defence as Munas Dabbur capitalised after Craig Gordon had parried an effort into his path following his defence’s failure to deal with a left-wing free-kick.

The Scots were awarded a spot-kick just on the interval when Bibars Natcho crudely brought down Gilmour on the 18-yard line. All eyes were on Lyndon Dykes who claimed the points-clinching goal from a penalty-kick against Austria in Vienna last month.

Unfortunately, his effort from 12 yards lacked accuracy and Marciano managed to kick the ball to safety. It was more of a miss than a save.

HIT…Lyndon Dykes blasts in the Scots’ second equaliser with Che Adams about to join the celebrations.

However, the former Livingston striker made amends when he hit the second equaliser 10 minutes after the turnaround when he thumped a left-wing cross from Robertson into the net.

The visitors claimed a high boot from the Queens Park Rangers hitman and the match official checked on the VAR screens before awarding the goal.

Hampden was in bedlam and Scotland went for the winner as the crowd roared them on.

Marciano made a couple of saves, one notably from McGinn after he had been set up eight yards out by substitute Ryan Christie who had been a 67th-minute replacement for Adams. 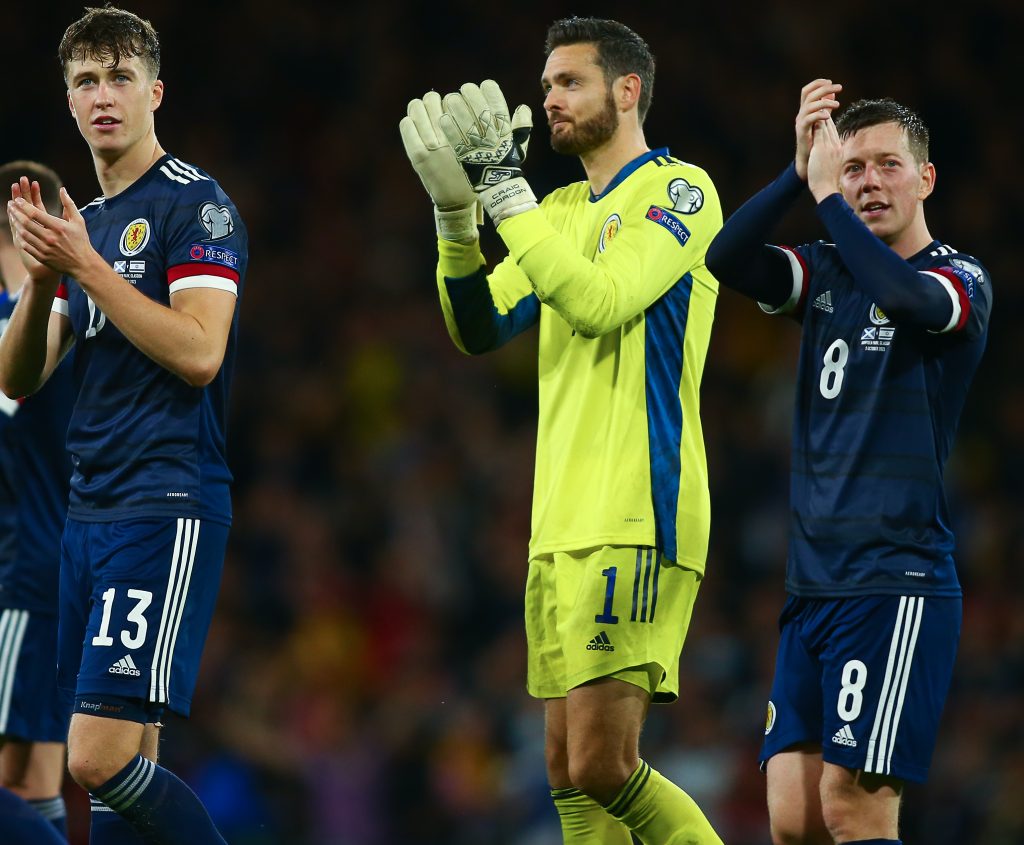 Nir Bitton was one of a blizzard of bookings by the overworked ref while his Celtic team-mate Liel Abada watched the action from the sidelines as an unused sub.

And then came the dramatic climax to a massively entertaining encounter when McTominay claimed the incredible winner.

Manchester United legend Sir Alex Ferguson, sitting in the Hampden stand, had every right to look extra pleased at the efforts of the matchwinning Old Trafford youngster.