A THREE-GOAL second-half salvo fired Scotland to their third successive victory at rain-lashed Hampden this evening.

Steve Clarke’s men brought down the curtain on a failed Euro 2020 qualifying attempt, but they can now look forward to Friday’s draw to discover who they play in the first of the play-offs for next summer’s Finals.

The Scots kicked off the campaign by losing three goals in Kazakhstan and they repaid the compliment in front of 19,500 of the Tartan Army on a cold and wet night in the south side of Glasgow.

Once again John McGinn took centre stage with two goals to take his tally to six in a trio of games while captain Steven Naismith added the other.

Amazingly, the home side went in a goal down at the interval after having the bulk of possession.

Boss Clarke fielded the line-up that started the 2-1 win over Cyprus in Nicosia at the weekend – the first time in a year an unchanged line-up had turned out in successive games.

The Scots had a lot of the ball in the first-half as they dedicated the flow of play, but, remarkably, they went in a goal adrift at the interval. 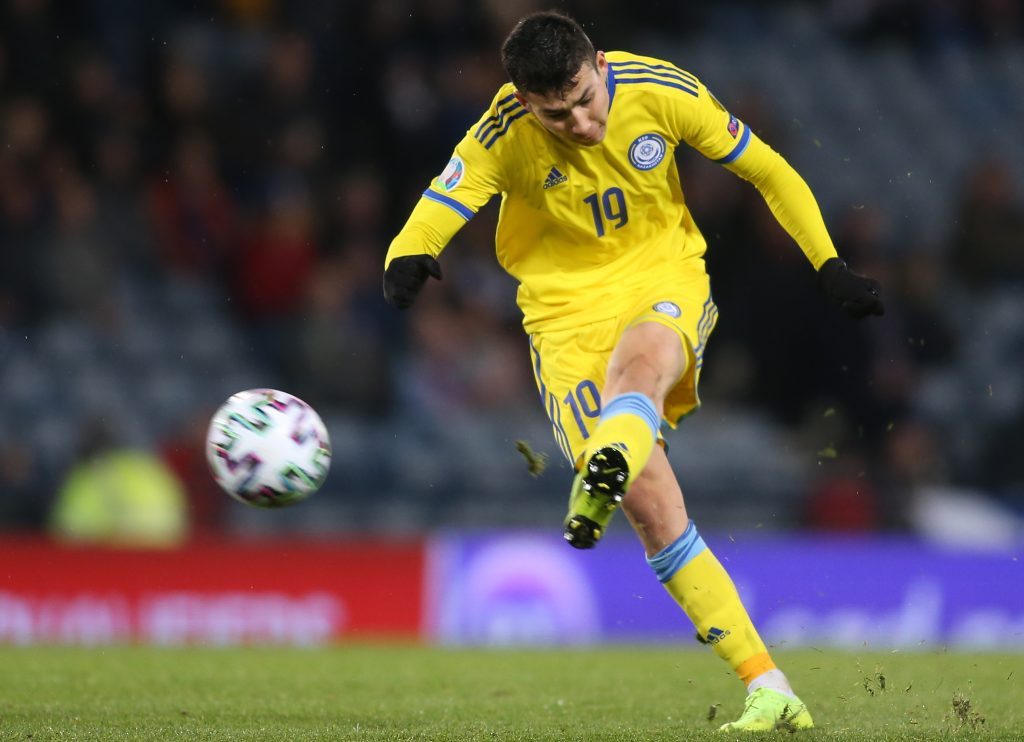 WALLOP…Kazakhstan’s Baktiyor Zainutdinov thumps his nation into a stunning lead.

James Forrest had been threatening to run amok on the left wing as he cut through the opposing rearguard time and again to no avail.

He showed a flash of what was to follow in the 11th minute when he played a neat pass inside for Callum McGregor, but the midfielder’s first-time effort flew over the bar from 16 yards.

Only moments later. the Celtic flyer picked out McGinn on the edge of the box, but his left-foot drive lacked oomph and keeper Dnytro Neponodov dropped on the ball to make a comfortable save to his left.

David Marshall tidied up a Kazakhstan breakaway when he got down at his post to hold a drive that lacked power and precision and the game flowed back in the opposite direction in the 27th minute when Naismith slipped in Forrest, but he, too, produced a powderpuff finish and the keeper saved easily.

In the 33rd minute Neponodov had to look smart to get across his line to push away a first-time effort from Ryan Christie for a corner-kick and from the award he made another stop from a Naismith header.

A goal was on the cards – but, unfortunately, when it arrived it was at the other end. 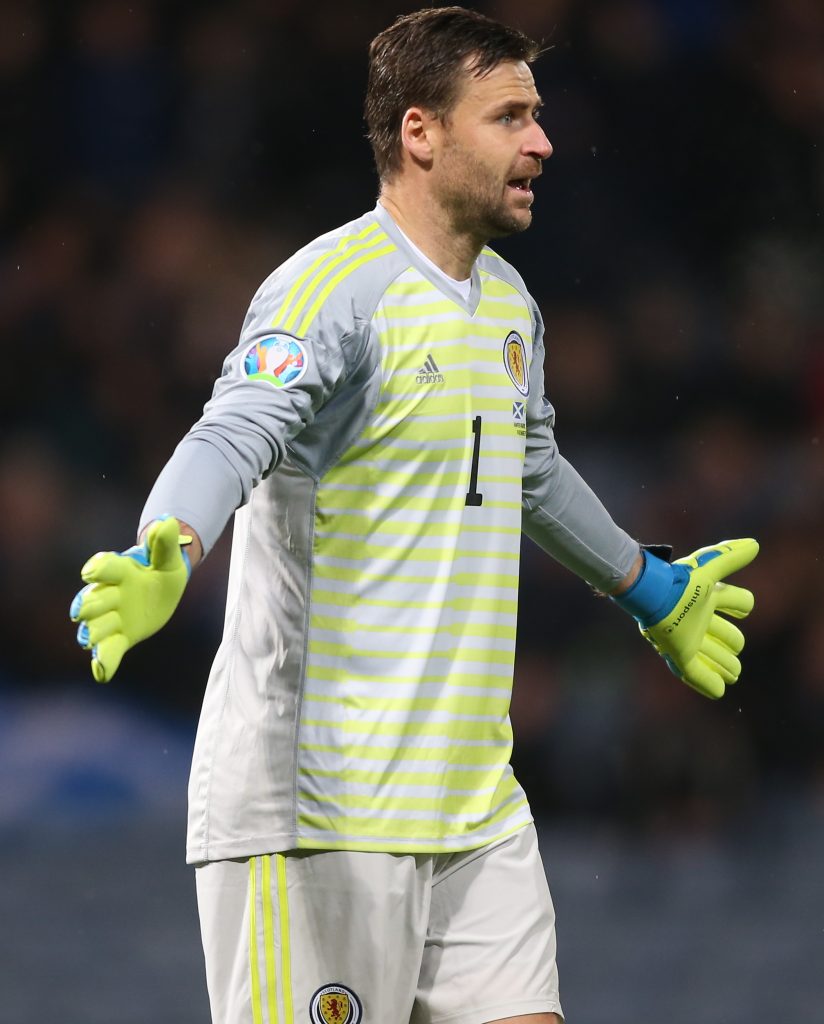 IN WITH A SHOUT…David Marshall yells instructions to his defenders.

The Scottish back four was slow to react as Baktiyor Zainutdinov picked up a short pass and was given far too much time and space by the hesitant Scott McKenna to line up a shot. He duly fired an unstoppable drive from 20 yards high beyond the static Marshall with the ball kissing the right-hand upright on its way into the net.

The fans and the players were stunned. There was instant retaliation when Liam Palmer released Ryan Jack and he stormed through two tackles to thump in a drive that was fisted away by the sprawling keeper.

There was a scare for Scotland just before the interval when the lunging Abiken was booked for a dreadful and wayward challenge on Forrest. He made contact with the winger’s left ankle and was very fortunate not to see a straight red card. 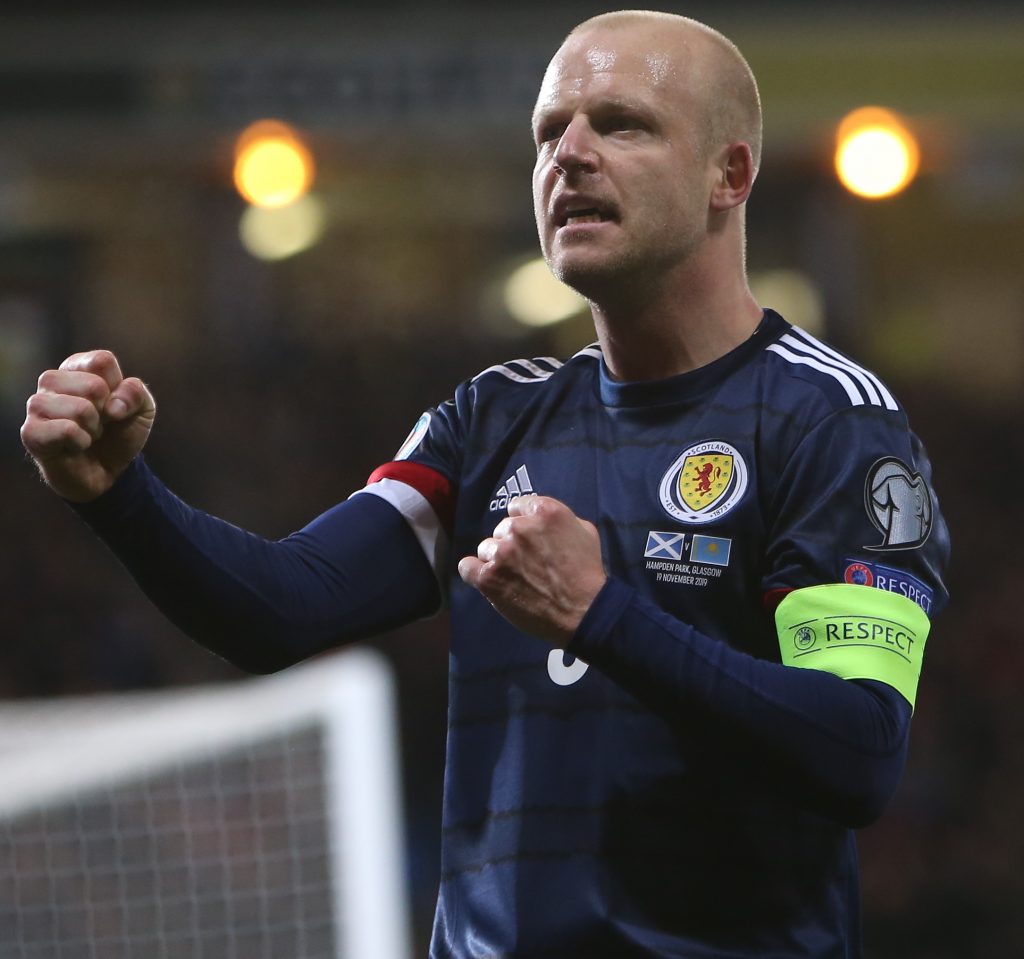 Two minutes after the interval, it was all-square when the Scots were awarded a free-kick 20 yards out just off centre following a clattering challenge on Naismith. McGinn, after three goals in the 6-0 win over San Marino and one against Cyprus, elected to take the award.

The Aston Villa midfielder thrashed a wicked effort goalwards and it found the net via a deflection off a defender that completely wrong-footed the keeper.

In the 64th minute, the Hampden fans were cheering again when Naismith claimed the second following a sweeping move from left to right. The Hearts striker was involved with a pass to Liam Palmer who knocked the ball wide for Christie and then raced to the bye-line to collect the return ball.

The right-back’s cross took a nick off a defender as he crossed it into the box and, as the goalie flapped under pressure from McGinn, Naismith headed in from practically on the goal-line. 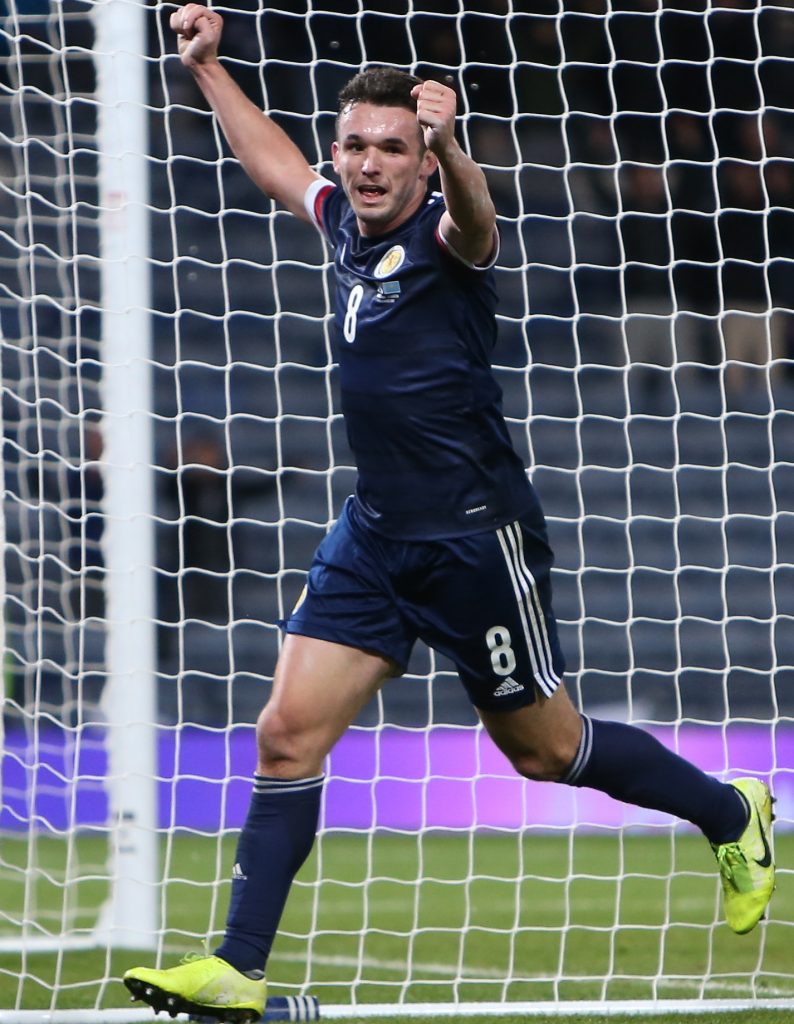 THREE AND EASY…John McGinn races away in triumph after claiming his second – and Scotland’s third – goal at Hampden.

McGinn hammered in the third in the 90th minute before making way for Stuart Armstrong. John Fleck, who had replaced Christie in the 83rd minute, sent Greg Taylor scampering on the left and his perfect ball to the near post was smartly tucked away by McGinn.

Oli Burke had also been introduced to the action in the 77th minute as a substitute for Naismith with the captain’s armband passing to Callum McGregor.

Clarke will have been satisfied with his players’ efforts, especially in the second-half when they stepped up the pace and got their rewards.

Now all eyes are on the ballot on Friday as the Scots eye making an appearance in a major tournament for the first time since the World Cup Finals in France in 1998.