Celtic Quick News on News Now
You are at:Home»Latest News»SCOTS CAP STAR AND THE IMPOSSIBLE CELTIC DREAM
By CQN Magazine on 27th May 2020 Latest News

CELTIC-DAFT Barry Bannan could have played his part in helping his boyhood favourites to their record-equalling nine-in-a-row achievement – if it hadn’t been for Neil Lennon!

The 30-year-old Scotland international midfielder was linked with the Hoops as Crystal Palace prepared to allow the pocket dynamo to leave during the January 2015 transfer window.

Ronny Deila did not follow up initial interest and, instead, spent £2million on Dundee United double-act Stuart Armstrong and Gary Mackay-Steven.

That allowed Neil Lennon the opportunity to take Bannan on loan to the financially-stricken Championship outfit for the remainder of the season.

The Irishman needed someone with knowledge of England’s second-tier and swooped for the Coatbridge-born star who had previously had temporary transfers at Leeds, Blackpool and Derby during his years at Aston Villa. 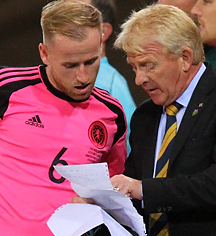 A WORD IN YOUR EAR…Gordon Strachan gives instruction to Barry Bannan during the World Cup-tie against Slovakia at Hampden in October 2017.

Bannan revealed he trained once a week at Parkhead and adored Henrik Larsson, but the family flitted to the Midlands when he 13 and the youngster ended up impressing Aston Villa while on trial and signed his first pro forms in 2006 when another ex-Hoops boss, Martin O’Neill, was in charge.

The 27 times-capped playmaker, speaking to the Claret & Blue podcast, said: “It was Martin who had the final decision. I got glowing reports from academy boss Bryan Jones and I got a good report from all of the academy staff, but it was down to the gaffer, Martin O’Neill.

“I remember my mum and dad saying when we went into the meeting that he’d mentioned about my height, that was his only query about me. But when I made my debut in Hamburg I remember him saying that my height wouldn’t be a problem because I had a good heart, I had the heart the size of a lion.

“From that day on when there was a question about my height it made me work that much harder, especially because I’d been touch and go for my pro deal.”

Bannan insisted he bears no grudge towards O’Neill for not allowing him more than two brief substitute cameos in the UEFA Cup and admitted few managers would have promoted an unproven teenager. Instead, he is thankful a boss he grew up hero-worshipping at Celtic, gave him a pro deal and a debut. 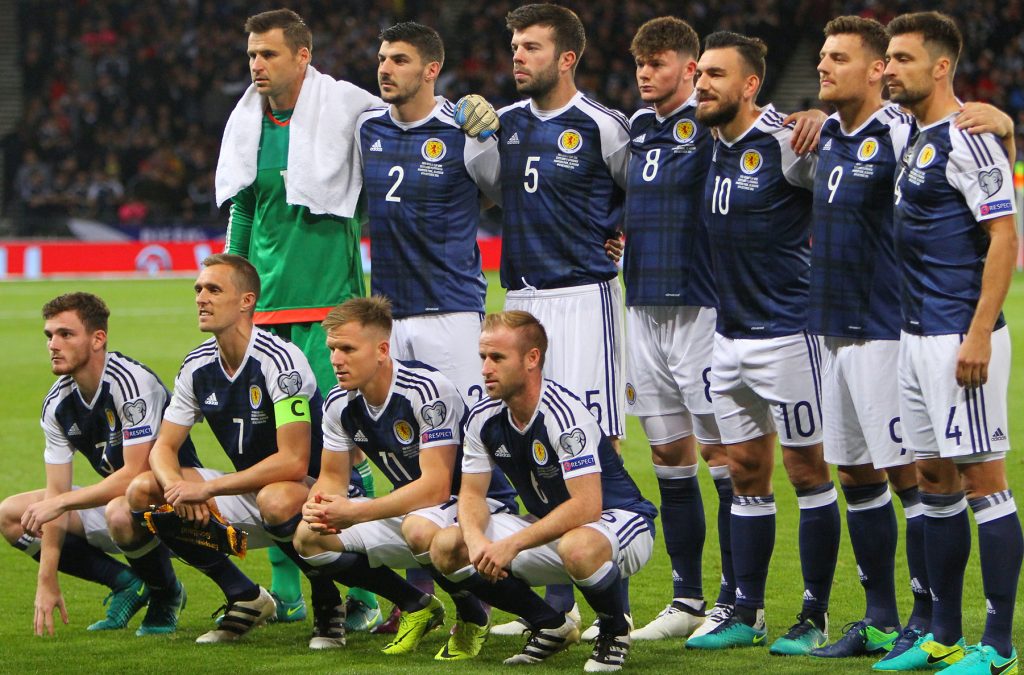 READY TO GO…Barry Bannan (front row, extreme right) prepares with his Scotland team-mates for a meeting with Lithuania in Glasgow in October 2016.

However, the Irishman quit the Midlands outfit before the 2010/11 season kicked off and that left the midfield man in limbo.

Former Liverpool chief Gerrard Houllier took over in September 2010, but the Frenchman’s heart problems prematurely ended his stay at the club in June 2011. The next two managers in Bannan’s Villa career were from both sides of the Glasgow Divide, Alex McLeish and Paul Lambert.

The player became a mainstay under the ex-Ibrox boss until he was replaced by the one-time Celtic skipper in June 2012.

Bannan knew his time was up as the 2012/13 campaign neared its conclusion. From being starstruck upon meeting Lambert, he was eventually banished to train with the reserves by the Hoops hero.

He said: “That was a hard one to take because I wasn’t a troublemaker or anything. I’d come in, worked hard in training, done what I had to do, but for whatever reason I wasn’t going to feature in the plans.

“But what I didn’t like was I had to train with the reserve team and stuff like that. I remember saying that day would it be alright if I could train with the first team until I got something, but he was like: ‘No, I want my squad that’s going ahead next season altogether and the other ones trying to get moves, elsewhere’.

“I was like: ‘Fair enough’. We never argued, it kind of ended amicably, but it could have been dealt with better. When I signed for Palace I think they took over my last year, so I would have been going into my last season at Villa. I would have had the following season left. 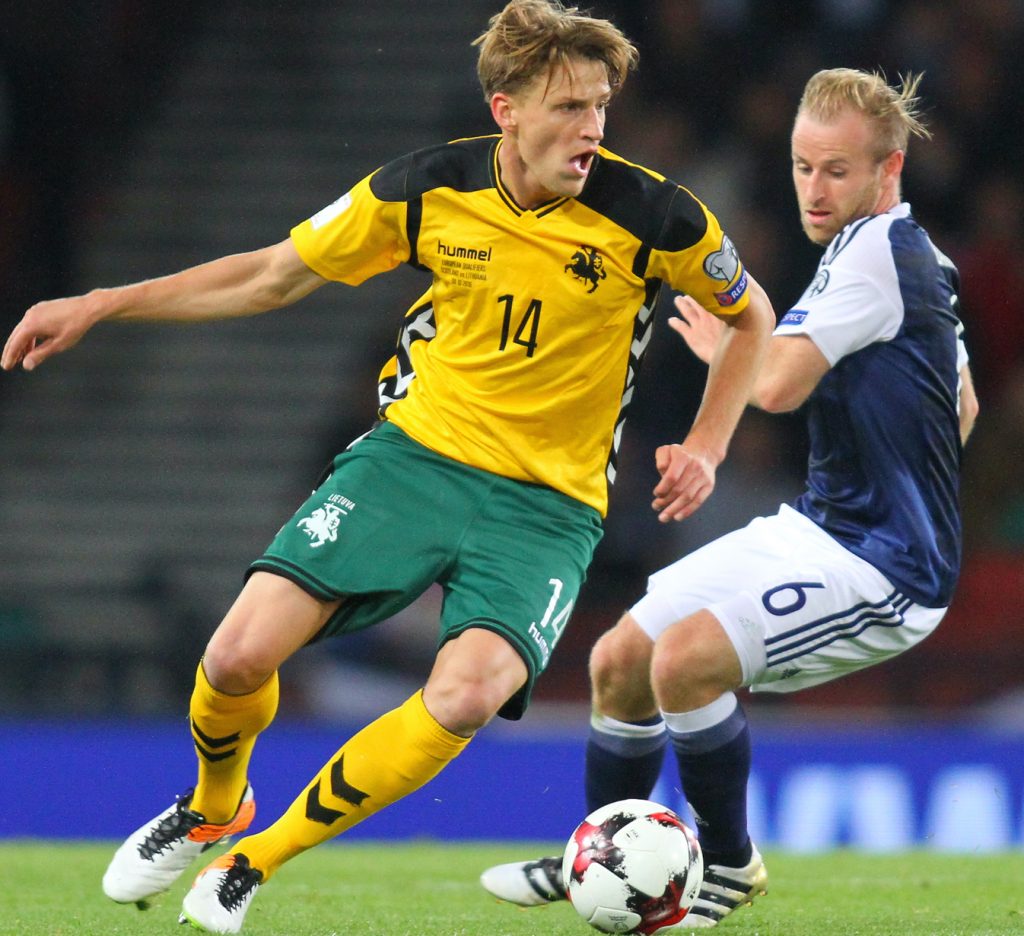 HE WENT THATAWAY…Barry Bannan challenges Hibs’ Vykintas Slivka in the game against Lithuania.

“Looking back now, when I went to Palace, I wouldn’t say I regretted it, but Alan Hutton was in the same boat. He stuck around and got back in. I didn’t want to leave, I was happy, my family were here, all my friends were here.

“Obviously, I was at the club that I wanted to be at. So, I don’t know if I’d have maybe have stayed around I might have got in as the season went on, but he made it obvious that I wasn’t going to be part of it.”

After two years at Palace, broken up by a brief loan spell with Lennon at Bolton, Bannan has settled at Sheffield Wednesday.

It’s long odds he will ever get the opportunity to play for his idols. In fact, it seems as though none of the Bannans was fated to pull on those famous green-and-white hoops.

His father James showed promise as a youngster, but any hopes he had of going to Parkhead ended the evening two Celtic coaches knocked on his parent’s door to offer him a trial and were informed he was down the pub.

Bannan added with a smile: “My gran’s killed him there, to be honest. She didn’t know who they were – safe to say they never came back.”