SCOTT McTOMINAY could be the ideal midfield man to take over from retiring Scotland skipper Scott Brown.

That’s the verdict of former international defender Gordon McQueen as returning boss Alex McLeish searches for a replacement for the inspirational Celtic star.

Manchester United youngster McTominay has knocked back England, the nation of his birth, to pledge his future to Scotland.

The Old Trafford kid’s decision is expected to be rubber-stamped today ahead of tomorrow’s announcement of the squad for the friendly matches against Costa Rica and Hungary at the end of this month.

With the recruitment of McTominay, whose father Frank is a Glaswegian, McQueen reckons Big Eck has immediately solved the Brown problem.

He said: “We have Scott Brown retiring from international football and this lad will be able to do that same defensive holding role for Scotland if he manages to force his way into the side.

“It’s been suggested that he’s similar to Darren Fletcher in terms of where he plays. 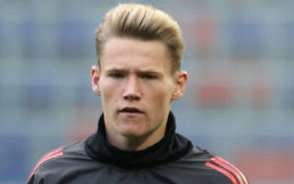 “I would say Darren would have been a little more creative, but the holding role is such an important position in modern-day football and that looks to be where Scott is at his best.”

McQueen added: “It’s good to hear that he feels more Scottish than English.

“I like to hear that type of thing because he’s the right standard, so picking Scotland over England is the key thing.

“When these boys realise that they can’t get a game for England, so decide to join up with Scotland, I’m not in the slightest bit in favour.

“But when a choice is made when both options are open and available, players like that are good for me.

“As long as you are picking Scotland for the right reasons, that’s all I need to know.”

COLLUM IN CHARGE AT IBROX