CELTIC are on their travels again when the Scottish Cup quarter-final ballot paired them with a tie against St Johnstone at McDiarmid Park later this month.

The Hoops, 3-0 winners over Clyde at Broadwood this afternoon, faced Tommy Wright’s men recently and raced to a 3-0 advantage by the interval.

They also kicked off the Premiership season against the Perth outfit in August and won 7-0 on Flag Day in the east end of Glasgow.

Neil Lennon’s men made certain of a place in this stage by winning a remarkable THIRTY-THIRD domestic Cup-tie in dreadful conditions on a plastic pitch. 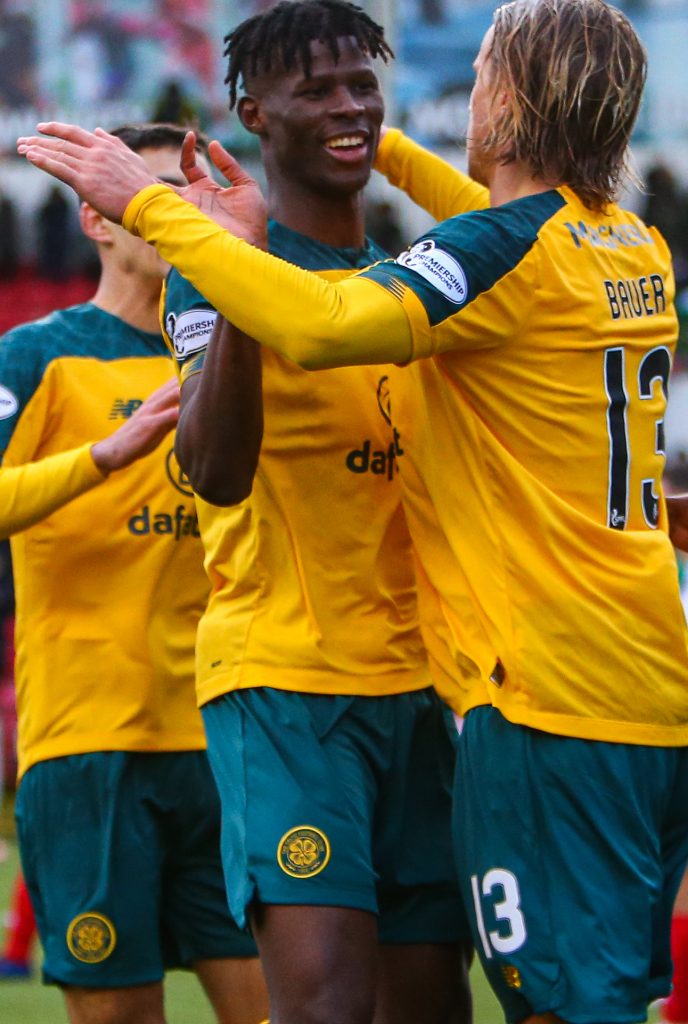 CELTIC’S BBC…Vakoun Issouf Bayo is congratulated by Moritz Bauer after the third goal as Ryan Christie prepares to join in.

The Hoops had been reminded all week in the lead-in towards this afternoon’s encounter against Clyde at Broadwood that they had lost 2-1 against the same opponents at the same venue in 2006, but there was never any chance of another shocker on this occasion.

Oliver Ntcham, celebrating his 24th birthday, whipped in the opening goal in the 16th minute and skipper Scott Brown doubled the advantage before the interval.

Substitute Vakoun Issouf Bayo, who had fluffed two earlier chances, claimed the third in the fading moments following a good run and pass from Moritz Bauer..

The quarter-finals are due on the weekend of February 29 – March 1.