The Slovakian striker was brought to Ibrox from Austria Vienna during the disastrous Paul Le Guen reign in 2006.

Sebo came with a goalscoring reputation, but he managed only two in 24 league appearances before being offloaded to Spanish club Valenciennes a year later.

The Celtic captain notched his first goal in two seasons with his whizzbang 25-yard drive in the 5-0 Scottish Cup rout of hapless St Johnstone at Parkhead yesterday to put the holders into tonight’s quarter-final draw which will be made following the Ross County v Inverness Caley Thistle tie.

Brown is often encouraged by the Hoops fans to have a go at goal, but he laughed: “I don’t think they actually want me to shoot most of the time.

“I usually get the shout of ‘Sebo’ two seconds after I shoot!

“It’s one of those that I’ll probably hit one time out of a 100 that sweet and it goes in the top corner. The main thing, though, was getting into the next round, it was a good, proper performance.”

Brown’s belter against the Perth outfit is a Goal of the Season contender, but the Hoops skipper reckons it’s NOT his favourite.

His outstanding curling effort against Allan McGregor at Ibrox in the 2-2 Scottish Cup draw in 2011 – and the first sight of the famous Broony celebration – will always be tops.

He added: “It’s up there with the best I have scored, but probably the one I got against Rangers is the best one for me. They don’t come around that often. I struck it sweet and I’ve managed to hit the target.

“I’ve had a couple of shots in the last couple of weeks as I’m managing to get a bit further forward. It’s different when you play with two in the middle of the park. 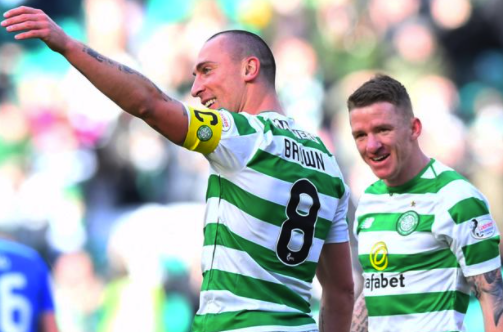 ALL SMILES…goalscorer Scott Brown and team-mate Jonny Hayes after his strike against St Johnstone.

“It was good to get forward and get the goal.”

Scott Sinclair thumped in his second hat-trick of the campaign – the other came against Aberdeen on Boxing Day – and James Forrest netted again against Saints, his sixth goal against them this term.

Oliver Burke, who was scintillating against the saints before his withdrawal in the 67th minute, drew some words of praise from the 33-year-old captain.

He added: “In terms of pace and power Oli’s by far the quickest I’ve played with up there.

“His ball to Scotty Sinclair, it’s great to actually see someone create something from nothing. He touches it past the guy and then he knows nine times out of 10 he will beat a defender for pace.

“Scotty is in the right place at the right time, as well. People won’t keep a high line because of that pace.

“Our three forwards with Scotty and James Forrest, as well as Timo Weah coming on, we’ve got pace everywhere and that scares people more than anything.

“If people want to press the game, then you’ve got that long pass in behind for them to take up and the way they are all playing just now – they are in great form – you’d fancy them to score goals.”