ARGENTINIAN left-back Alexandro Bernabei, who has been linked with Celtic, was involved in a shocking flashpoint in his side Lanus’ league 1-0 win over Colon at the weekend.

The 21-year-old defender was banished with a straight red card after a HEADBUTTING incident with an opponent in the 69th minute.

Bernabei reacted angrily in a clash with Santiago Pierotti who appeared to push his rival in the face after the referee awarded the home side a free-kick. The £3.5million-rated star took the kick and then thrust his head into Pierotti’s face to send him crashing to the turf. 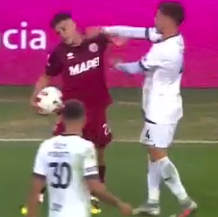 CRASH…Alexandro Bernabei appears to receive a push in the face from his opponent. 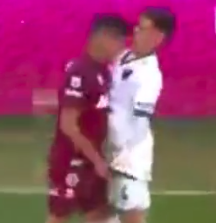 BANG…Bernabei thrusts his head into the face of Santiago Pierotti. 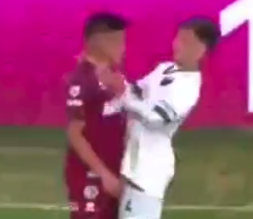 WALLOP…Pierotti reels back after the clash as he prepares to crash to the turf.

The referee, who was only yards from the incident, had no hesitation in dismissing the reported Hoops target, according to a report in the Daily Record.

If this is his last appearance for Lanus, he said farewell in highly controversial circumstances.

Ironically, it was Bernabei’s first game for the club after sitting out the past three encounters with rumours rife he was on his way to Europe, with the champions mentioned as a possible destination.

Ange Postecoglou is keen to strengthen the No.3 position and add competition to Scotland international Greg Taylor.