It’s the second time in three months the referee has been the match official in the Glasgow derby – the Hoops lost the other one 1-0 in Govan on January 2.

Madden ordered off Nir Bitton around the hour mark with the game goalless and the visitors dominating proceedings.

The Israeli international was involved in a coming together with Alfredo Morelos and CQN timed the whistler’s reaction at THREE SECONDS in reaching for a red card. 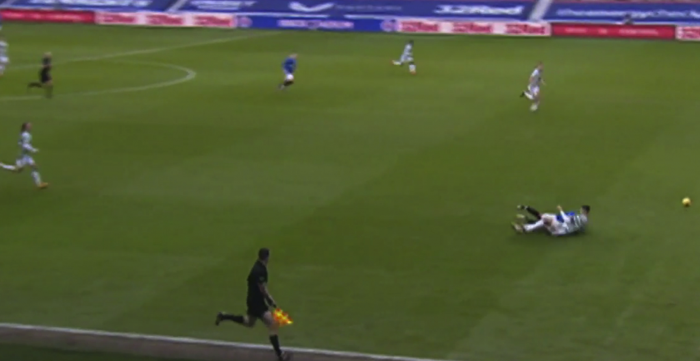 OFF MOMENT…Nir Bitton and Alfredo Morelos hit the deck as referee Bobby Madden prepares to flash a red card before his assistant gets a chance to raise his flag.

It was a decisive moment in the encounter and Steven Gerrard’s side won through an unfortunate deflection from Callum McGregor following a right-wing corner-kick shortly afterwards.

Celtic go into the match as holders of the trophy after winning the silverware for the past four seasons. They are looking to continue their record-breaking sequence in the forthcoming confrontation.

Madden will be assisted by David McGeachie and Graeme Stewart, with Kevin Clancy as the fourth official.

Willie Collum officiated in the previous encounter between the teams that ended in a 1-1 draw last month.