The former Rangers striker had a running feud with victorious Celtic skipper Scott Brown throughout the afternoon as the champions eventually won the Scottish Cup on penalty-kicks to complete the unprecedented quadruple treble.

Cameras caught Naismith tangling with a grounded Hoops midfielder in the first-half which was missed by referee John Beaton.

Naismith was later yellow-carded for an incident in the penalty box when he appeared to strike Brown on the face with his arm as the Hoops prepared to defend a left-wing corner-kick.

It was just one of several skirmishes the champions’ 35-year-old onlfield leader found himself embroiled in while another former Ibrox player, Andy Halliday, was also booked for a wayward challenge on the Parkhead hero.

Commons, writing in his Daily Mail column, said: “Naismith has history in this particular area. In May 2018, he was given a two-match ban for a stamp on Brown during a match at Tynecastle.

“He was extremely fortunate to stay on the pitch yesterday. It’s bizarre because, away from the pitch, you genuinely couldn’t meet a nicer boy. But he has a real nasty streak in him as a player. 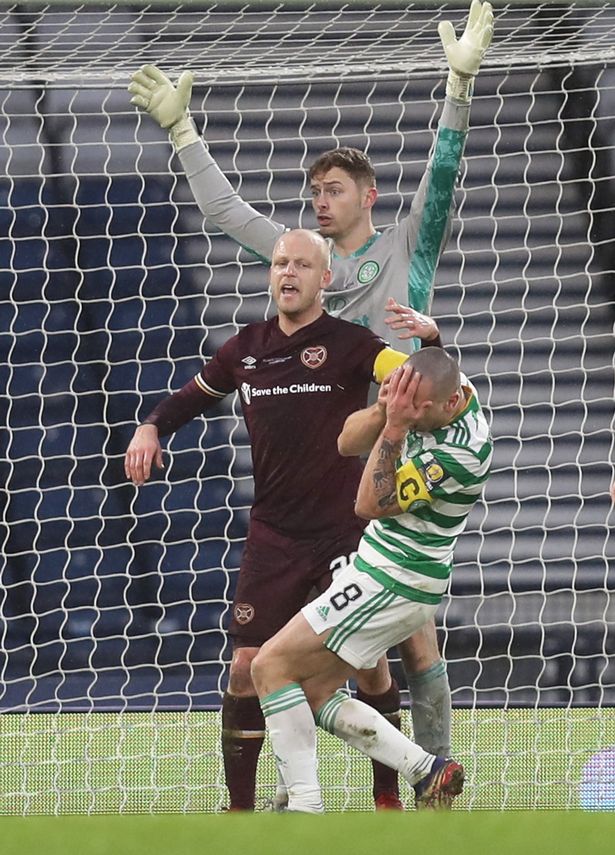 WHACK…Scott Brown reels away as he is struck by Steven Naismith as the players ine up in front of Conor Hazard at a corner-kick.

“He overstepped the mark yesterday and it typified Hearts during the first-half. Beyond the Naismith stamp, you had Andy Halliday getting booked for a wild challenge on Brown.

“You then also had Craig Gordon having a bit of a meltdown after Odsonne Edouard’s dinked penalty with Gordon getting up and literally throwing the ball in anger at the Celtic striker.

“Hearts lost their heads collectively and were far too emotional, which was a major reason behind why they started the match so slowly.”

Former Scotland international midfielder Commons added: “They played right into Celtic’s and Brown’s, hands. Knowing him as I do, Brown would have absolutely loved the fact that Hearts were targeting him.

“He revels in that sort of stuff. The video of him laughing in Halliday’s face summed it all up. Brown is a wind-up merchant and a former Hibs player, so it’s no surprise he revels in lording it over Hearts.

“The fact that Naismith and Halliday were on the opposing side would only have made it all the sweeter as he racked up another trophy.

“Brown has now won 22 major honours as a Celtic player. He may be coming to the end of his career, but only Billy McNeill stands above him in the pantheon of all-time great Celtic captains.

“He’s still capable of inspiring his team when they need him. Just look at the way he bulldozed his way through for the header which led to Leigh Griffiths’ goal yesterday.”