The champions dominated for more than hour and could have been at least two goals ahead until they were reduced to 10 men after the Israeli defender hauled down Alfredo Morelos wide on the Hoops’ left outside the box.

Ropey ref Madden immediately banished Bitton – who, ironically, wouldn’t have been playing if Christopher Jullien hadn’t been ruled out after a midweek injury in the 3-0 win over Dundee United – and the whistler must have reckoned the Colombian had been fouled when he had a clear goalscoring opportunity.

It certainly couldn’t have been for violent conduct as the makeshift centre-back put his arms around the Ibrox attacker who had escaped a yellow card – at the very least – in the fifth minute after a stamp on Jeremie Frimpong. 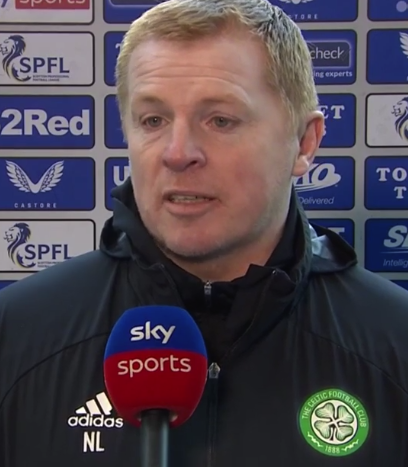 “The referee has made the wrong decision and it’s changed the course of the game.

“It’s not a sending-off, it’s a foul. We’ve got Ajer coming in on the cover and Morelos is in a wide position.

“It’s not a clear and obvious goalscoring opportunity – he might get a shot off, but he’s certainly not clear through on goal.

“I think he (Madden) was too quick to get the red card out.”

Asked if Morelos wasn’t in a strong goalscoring position, Lennon replied: “From where, though? It would be a hell of a goal to beat Barkas from there with Ajer coming in.

“You can debate it all you want for me, for a game of this magnitude, it was a really rash decision from the referee.” 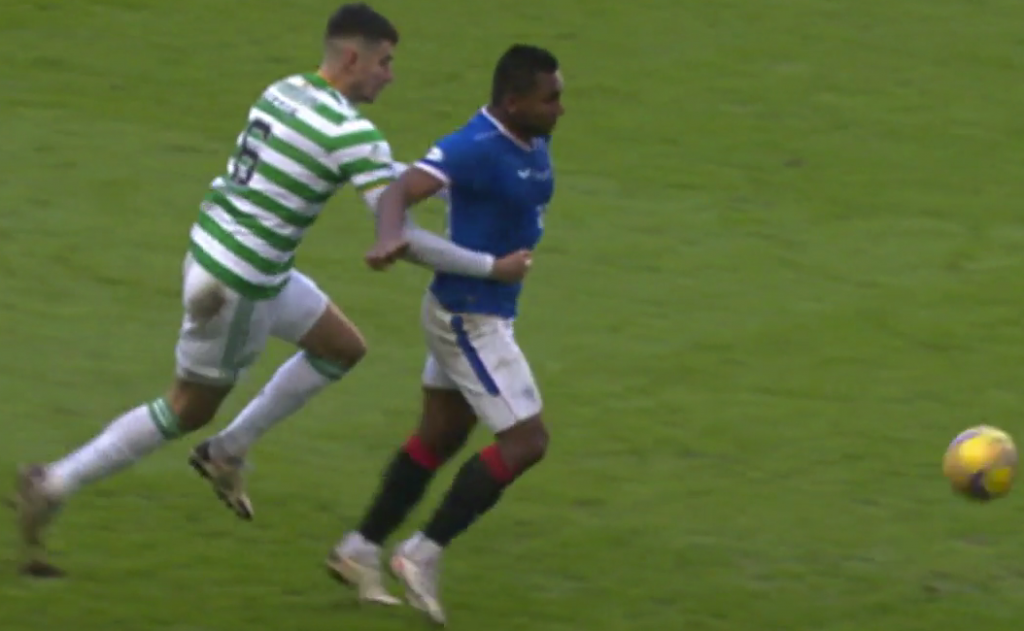 CRASH LANDING…down go the Celtic defender and the Ibrox striker.

Lennon, though, praised his players as the bid for a historic tenth successive title almost certainly ended in Govan against a team that, amazingly, did not get an effort on Vasilis Barkas’ goal all day.

The points-clincher was knocked past the Greek keeper by Hoops skipper-for-the-day Callum McGregor following a bizarre deflection off his shoulder after a right-wing corner-kick from James Tavernier.

The Hoops gaffer added: “I am really proud of the performance.

“I thought we were outstanding before the red card that changed the course of a game we controlled, dominating the play.

“We’ve been done by a pretty poor refereeing decision. I don’t think he was great all day.

“He’s made the decision straight away, Nir’s not done great, he’s got himself in the wrong body position, but he’s not clean through.

“Ajer was on the cover so we had to jig things up and we were really unfortunate with the goal.”

OWN GOAL AND OH SO CRUEL AS 10-MAN CELTS LOSE