Celtic Quick News on News Now
You are at:Home»Latest News»SEEING RED: ‘NO CONSISTENCY,’ RAGES KENNEDY
By CQN Magazine on 2nd May 2021 Latest News

The Celtic midfielder was dismissed in a game-defining moment as Kemar Roofe gave Steven Gerrard side’s the lead just a minute after Mohamed Elyounoussi had hit the bar.

McGregor, who had been harshly booked for an earlier challenge on Ryan Kent, was penalised for a tackle on Glen Kamara in the build-up for the breakthrough goal.

The match official waved play on as Roofe deflected a Kent drive past Scott Bain just over a minute after Allan McGregor had got a fingertip to a rasping long-range drive from Elyounoussi that unluckily smascked off the face of the bar and rebounded to safety.

Kennedy took no issue with the midfielder’s second yellow card, but he reckoned the initial booking was harsh.

The interim manager, speaking to Sky Sports news, said: “It’s a turning point, but, again, the second tackle he is on a yellow, goes to ground and gets a red card. That’s fine. 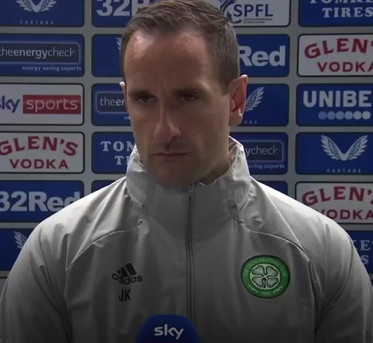 “It’s the first one, the yellow card. I asked the referee at half-time: ‘What did you book McGregor for?’

“And he said: ‘A reckless tackle’.

“Now I don’t see any recklessness in it. He’s on his feet, makes a genuine attempt for the ball and Kent’s managed to nip in before him. There’s nothing reckless in it.

“There’s another incident on the far side where Edouard’s breaking through into the final third and gets taken down by a slide tackle and we get a free-kick and that’s it.

“There’s no consistency there and that’s what I’m most disappointed with. Red cards can happen, but, at least. make the right calls.”

Ibrox has been a nightmare ground for McGregor this year – the Hoops vice-captain scored the only goal of the game on January 2 that virtually killed off any remote chance of a tenth successive title.

Nir Bitton was red-carded in that encounter that was dominated by the visitors for the opening hour.