Celtic Quick News on News Now
You are at:Home»Match Report»SEVCO SKELPER DEMBELE DOES IT AGAIN
By CQN Magazine on 23rd October 2016 Match Report

MIGHTY Moussa Dembele was the man who mattered again as Celtic booked a Betfred League Cup Final place against Aberdeen at Hampden on November 27.

The Hoops are now 90 minutes away from winning their 100th trophy – and it was the French striker who did the damage again with the winning goal three minutes from the end of a confrontation dominated by Brendan Rodgers’ side.

The Ibrox men rode their luck when ropey referee Craig Thomson ruled out a perfectly good ‘goal’ from Erik Sviatchenko four minutes after the interval. 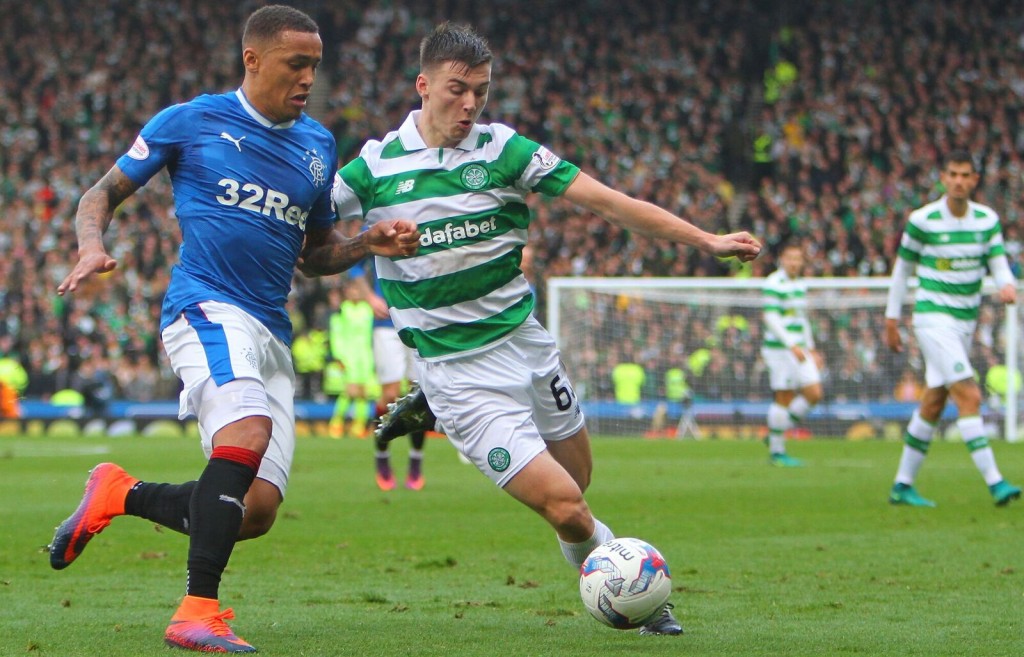 And they escaped again in the 67th minute when Scott Sinclair clattered the crossbar with a 25-yard free-kick.

Goalkeeper Matt Gilks had kept the Celts at bay with a variety of saves, mainly with his feet, and it looked as though the game might go to extra-time or even be settled by the dreaded penalty-kicks.

But justice was done in the 87th minute when the impressive Jozo Simunovic, playing instead of Kolo Toure, picked out substitute Leigh Griffiths with a long-range defence-splitting pass.

Ibrox skipper Lee Wallace made a mess of trying to cut out the threat and Griffiths swooped onto the ball.

He hit an inviting cross into the danger zome off the outside of his boot and Dembele arrived at pace to catch the ball with his right foot and flick a disguised effort beyond Gilks.

At last the barrier had been broken and Dembele, a hat-trick hero when the teams met in the Premiership last month, took the accolades once again as he shot Celtic into the Cup Final against the Dons, who beat Morton 2-0 yesterday to get through.

The first threat came from the Hoops in the 10th minute after some clever play from Sinclair swooping in from the left.

He stuck the ball through the legs of Andy Halliday to set up Tom Rogic, but the Aussie’s shot was fortunately diverted off the boot of Rob Kiernan and over the bar with keeper Gilks mightily relieved. 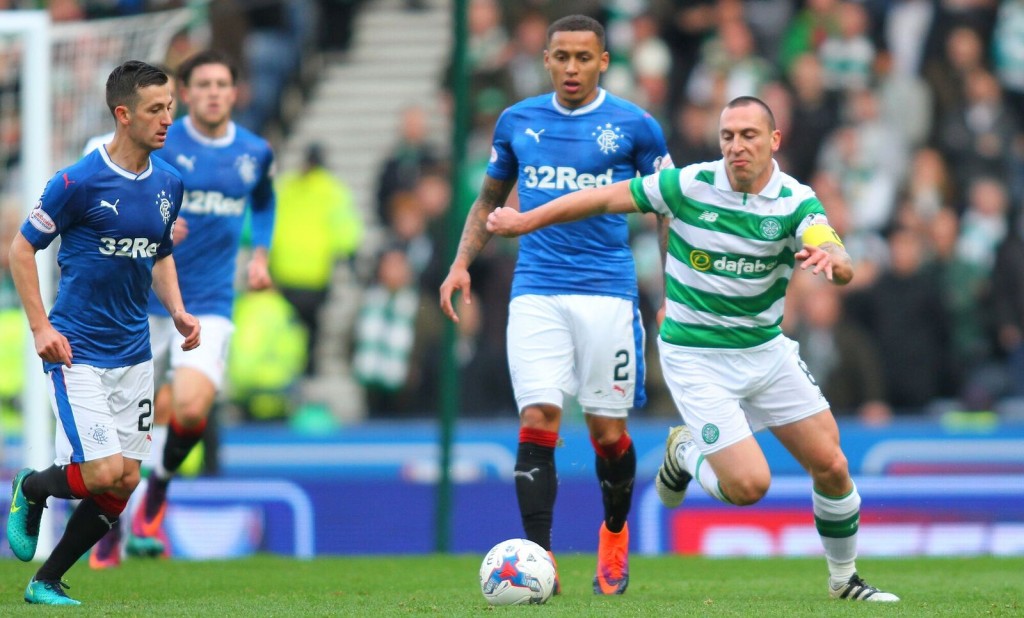 Rogic was wasteful with the right-wing corner-kick that flew over friend and foe as it headed for the other touchline.

Four minutes later, Barrie Mackay was booked by Craig Thomson for diving as he tried to win a penalty-kick after a challenge from Simunovic.

In the 16th minute, Sinclair was sent racing clear after a cute through pass from Dembele, but Gilks managed to get his foot to the ball to divert it for another fruitless corner-kick.

Sinclair left his team-mates bewildered shortly afterwards when he demonstrated he could be as wasteful as Rogic with a corner-kick with another effort that completely cleared the penalty box.

However, Celtic should have been ahead in the 22nd minute when Gilks presented Rogic with a golden opportunity only six yards from goal.

The veteran shotstopper got his feet in a tangle after a passback from Wallace as he tried to clear and only succeeded in knocking the ball straight to the midfielder.

Rogic was so surprised at the gift that his first touch was awful and allowed Gilks the opportunity to nudge the ball clear for another corner-kick. It should have been a goal.

As the game ticked down towards half-time, Scott Brown robbed Halliday of the ball in midfield and fed a pass to the ever-eager Kieran Tierney.

He cut inside to have a blast at goal, but it took a nick off a defender and fell straight into the welcoming arms of Gilks.

The Hoops were clearly the superior team in the opening 45 minutes, but it might have worried their manager that little had been seen of James Forrest and Nir Bitton was being caught in possession far too often to be comfortable.

Forrest showed a bit more vim and vigour after the interval with a shot that flew off target and another effort that was blocked by Kiernan.

In the 49th minute, Celtic scored what was clearly a legitimate goal which was astoundingly ruled out by blundering referee Thomson.

Sinclair sent in an inviting left-wing cross which was met by Sviatchenko as he jostled with Clint Hill. It was a 50/50 challenge as the Danish defender won the battle of strength to divert the ball low into the net at Gilks’ left hand post.

The Celtic end erupted in joy, but were silenced when the whistler awarded the Govan side a free-kick. It was a nonsensical decision.

Three minutes later, Gilks blocked a Sinclair drive with his foot, but there was a rare moment of danger six minutes afterwards when James Tavernier broke on the right and sent in a low ball across the penalty area.

Jason Holt arrived right on time to belt an effort goalwards, but Simunovic dived in bravely to block the effort and it rebounded to safety.

It was a bit of a wake-up call for Celtic who had been dominating without getting their reward.

On the hour mark, Dembele had a cross-shot from the left clawed away by the over-worked Gilks and two minutes later Bitton was replaced by Stuart Armstrong. 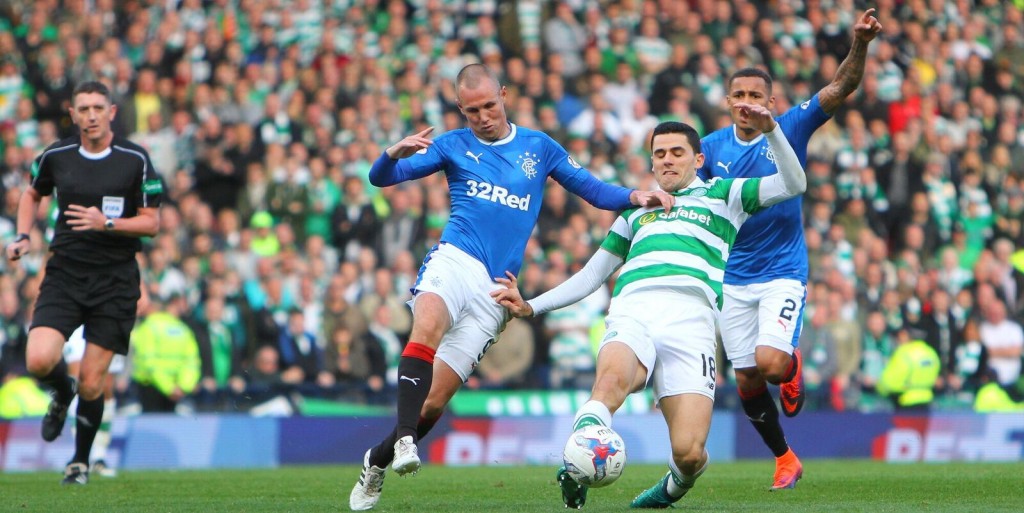 In the 67th minute, Dame Fortune snarled at the Hoops again after Halliday had given away a foul following a reckles challenge on Brown 25 yards out.

Sinclair took the award and curled a vicious effort onto the face of the bar. It struck the back of Gilks’ glove and, defying gravity, then dropped behind the keeper before he could grab it from rolling over the line.

Celtic and their manager were beginning to wonder if it was going to be one of those days. Was there really a Hampden Hoodoo on the men from the east end of Glasgow?

In the 70th minute, there was a huge cheer when Griffiths came on for the toiling Rogic and, almost immediately, the prolific hitman had an impact with a clever low ball over from the right that forced Hill to scramble it to safety with Dembele and Armstrong closing in for the kill.

Eight minutes later, Forrest drifted in from the right to present a chance to Dembele and his whiplash shot on the turn flashed wide of the target with Gilks stranded.

There was a shout for a penalty-kick in the 82nd minute when Sinclair went down after a slide challenge from Wallace, but the referee was having none of it. No-one wearing green and white at Hampden was one bit surprised.

Four minutes afterwards, Forrest sent Armstrong through, but, amazingly, Gilks once again saved with his feet.

Dembele had the answer, though, with his cheeky effort to finally give Celtic the victory they so richly deserved.

And there was a chance for Griffiths to put the icing on the cake when he was sent clear by Armstrong, but Gilks managed to paw away his cheeky flick.

So, Brendan Rodgers and Celtic are in the Betfred League Cup Final – and a mere 90 minutes away from becoming ton-up Bhoys!