Celtic Quick News on News Now
You are at:Home»Latest News»SHAMROCK ROVERS TO WELCOME SIX IN A ROW INVINCIBLE CELTIC TO DUBLIN
By CQN Magazine on 1st June 2017 Latest News

SHAMROCK ROVERS have announced a pre-season friendly against Celtic at their Taillight Stadium in Dublin on Saturday 8 July. The match has a 3pm kick-off and is sure to be a complete sell-out as Irish supporters rush to see the 6 in a row Invincible Celts.

The match in Dublin comes just a week before Celtic begin their all-important qualifying campaign for the Champions League and Brendan Rodgers will use the Shamrock Rovers match to make sure everyone is ready for the qualifiers.

“We’re looking forward to going over and taking Celtic to our great supporters in Ireland and it’s a good point in the season for us to get some pre-season sharpness,” Rodgers admitted.

“We’ll have a strong team there. We’re not sending a Celtic XI or a reserve team. We’re bringing the strongest squad that we have and it will be 45 minutes either half or a team playing for 70-75 minutes. We’ll just need to see where we’re at in terms of the stage of our pre-season. But it will be all the first-team squad, players and management and it will be a really nice game for us.” 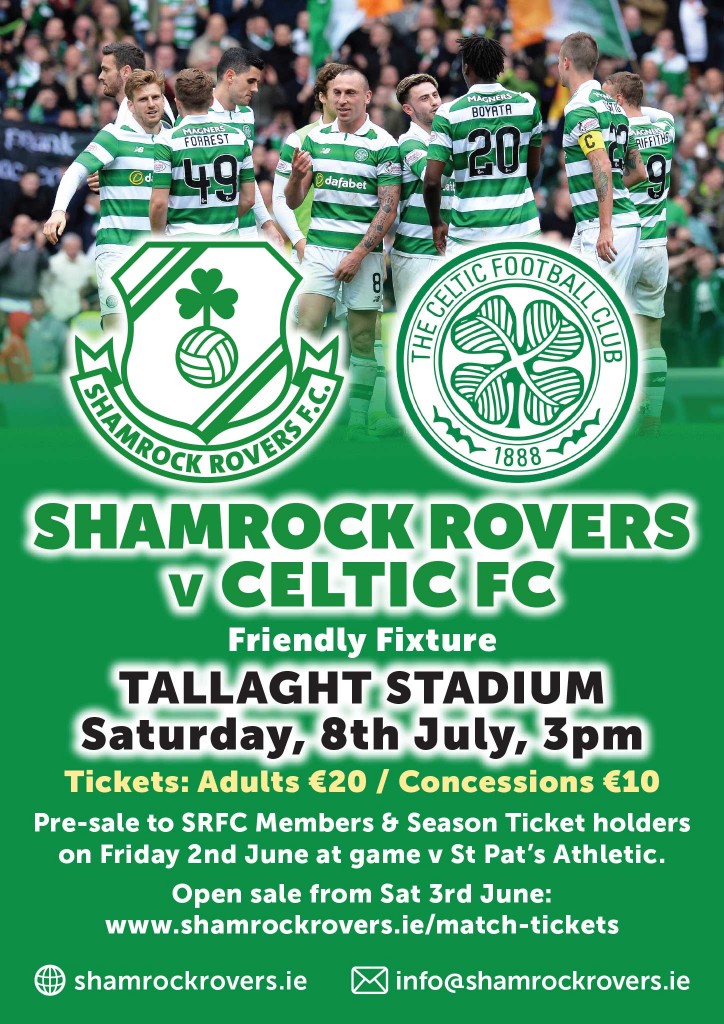 Shamrock Rovers of course play summer football and are currently in the middle of their campaign, sitting a disappointing fifth at the moment. Yet Rodgers is aware of their young manager and his pedigree in the game.

“Stephen Bradley, the young manager there, is a guy that I saw as a young player – he was an outstanding young player when he was at Arsenal,” said the Celtic boss.

“Damian Duff works at the club and I know Damian well from my Chelsea days and it will be brilliant to see him again. He was a fantastic player.

“Stephen McPhail is the Director of Football at Shamrock Rovers and he came over a couple months ago to have a look at what we do here at Celtic. He was also a fantastic player at Leeds and had a really good career.

An Irishman himself, Brendan is well aware of the sacrifices made by the Irish support to follow Celtic. This has been something that CQN has been shouting about for years, so it is nice to hear the manager speak about the issues facing Irish based Celtic supporters.

“Our fans travel worldwide to come to Celtic Park and wherever you go in the world there will always be Celtic supporters, but in particular, in pre-season if you can, take your team to the supporters, it’s something for them.

“They come over on the trains, the boats, the planes from Ireland every single week, so it will be nice for us to go over there and the supporters from the North can travel down as well and it’ll be a real nice day for us.”